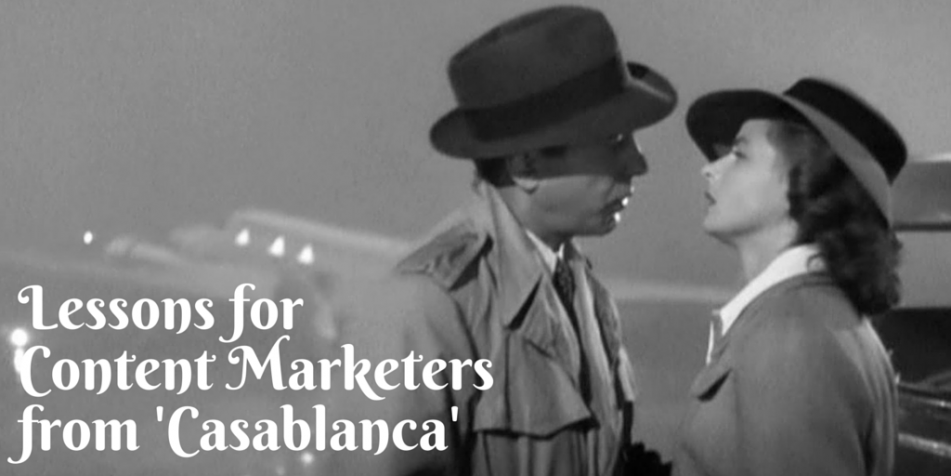 Alright, I admit it: I’m a sucker for great films.

Marathon Man, Rocky, One Flew Over the Cuckoos Nest, The Shining, Magnolia, Citizen Kane – all have a place in my collection and I’d happily spend a night on the couch watching (well, re-watching) any of them.

Great films tell great stories, have memorable characters, and manipulate the emotions of the viewer in the most wonderful ways.

Who doesn’t find themselves cheering for Rocky and willing him just to go the distance against Apollo Creed? Who isn’t more than a little creeped out by the twins in The Shining? And come on: how can you not include Nurse Ratched on the list of the most evil characters in movie history?

And because I love great films, I’m a fan of Casablanca, perhaps the best love story ever depicted on the big screen. There’s hope, loss, courage, patriotism, fear, despair, shame, and the sort of uplifting ending that Hollywood seems to have forgotten how to produce these days. Watching Humphrey Bogart and Ingrid Bergman play the roles of Rick and Ilsa perfectly is something I treat myself to a couple of times a year.

It might be more than 70 years since the film was released, but this is a movie that never gets old.

There’s something in Casablanca for the romantic and for the fan of action, for the connoisseur and for anyone who just wants to experience the rollicking good ride set in wartime Morocco.

But watching it again the other night it occurred to me that there might be something in the film for content marketers, too.

No, really: hear me out.

As I took in the familiar scenes and anticipated those great lines of dialogue, it occurred to me that these lines might have something in them for people who spend their days creating content. No many people can make their eyes sparkle quite like Bergman’s Lund can, nor is combining the supreme confidence and just-beneath-the-surface fragility of Bogart’s Blaine an easy task to accomplish.

But if content marketers take a closer look at some of those classic lines, there’s some wisdom there.

“Round up the usual suspects.”

In the opening scenes and again at the conclusion of the film the police are urged to ‘round up the usual suspects’. Content marketers can interpret this in two ways: as good advice, and as a warning.

On the advice front it’s a reminder that every content marketing task has some things in common. You are going to have to check spelling, grammar, design features, and check the SEO, too. Whether you are writing a blog post, composing tweets and social media messaging, or building a landing page you’ll have to work through some basic steps every time. Consider these steps your ‘usual suspects’, and mark them off your virtual checklist each and every time.

On the other hand, you can also consider it a warning. Much like the rounding up of the usual suspects is a likely futile exercise in policing, offering up the same-old same-old in each and every marketing campaign is likely going to lead to poor long term payoffs. Sure, there are some things that you’ll need to do every time, but this is no excuse for being lazy and not delivering on the creative front.

When Ilsa asks the pianist Sam to play ‘As Time Goes By’ she is asking him to take her back to a happier time using nothing but music. Is there a lesson here for content marketers?

For Ilsa the song is about making a connection to something, and what are content marketers doing if not seeking out a connection with content consumers? Content marketers use words, images, sound, video, and a range of tactics and strategies to connect with content consumers. And while they cannot rely on a single song being an effective tool for making that connection as it was for both Ilsa and for Rick, too, there are plenty of ways of tapping into the collective consciousness and connecting with the consumer.

Whether it is reaching into pop culture, dabbling in political commentary, establishing parallels between the present day and the past experiences of the customer base, content marketers are tasked with making connections. As time goes by (see what I did there?) this becomes an incredibly useful tool for building and maintaining an audience.

Rick escaped New York for France and had his heart broken in two. He decamped for North Africa, opened his saloon, and somehow the woman who had left him wrecked in a Paris train station had found her way into his bar.

What can we take from this? Rick’s drunken lament should remind content marketers that they don’t control who gets to read their content, view their videos, or subscribe to their podcasts.

While content marketers can – and should – create for personas that represent the audience that the employer is seeking out, this is only ever a guide as who might be reading and consuming the content.

Your target customer might understand the jargon you use, perhaps they even expect to read jargon heavy content. But there are other people who will read this content who may not be familiar with the jargon, acronyms, and abbreviations that litter the specialized text. How are you going to attract new customers if they cannot understand what they are reading?

Keep in mind that of all the pages on all the websites in all the world this content consumer has landed on yours: will you be able to convince and convert them from prospect to paying customer?

“Louis, I think this is the beginning of a beautiful friendship.”

At the conclusion of the film Rick and police prefect Louis walk off into the night with Rick waxing lyrical about the future the paid will face. For film fans – at least in these days of multiple sequels – this would have been the bridge to Casablanca II but, for content marketers, it’s a reminder that collaboration counts.

While content creation is often a single player game, there is value in reaching out to others to collaborate. Indeed, a writer working with a designer, an audio technician partnering with a videographer, or a small team getting together to work on a larger project can see the content produced being far more effective than what might be produced alone.

There’s a balance to be struck, of course, between ‘two heads are better than one’ and ‘too many cooks spoil the broth’, but collaboration usually makes for better content in the long run, if only because more than one marketing expert has had a chance to offer some input.

If you are the sort of content marketer who ‘sticks their neck out for nobody’ like Rick in Casablanca, maybe it’s time to think about creating a couple of ‘beautiful friendships’ with other content marketers. It’s almost certain that the give and take, brainstorming, and advice that you’ll share will improve the content of all – and that really is beautiful, right?

Casablanca is a wonderful film that has stood the test of time. It’s story of love, loss, and redemption is essentially timeless. But it’s also timely for content marketers who can learn from the classic lines and interactions and apply a few of the lessons in their own professional lives.

4 Reasons Twitter Is The Right Place for Your Career