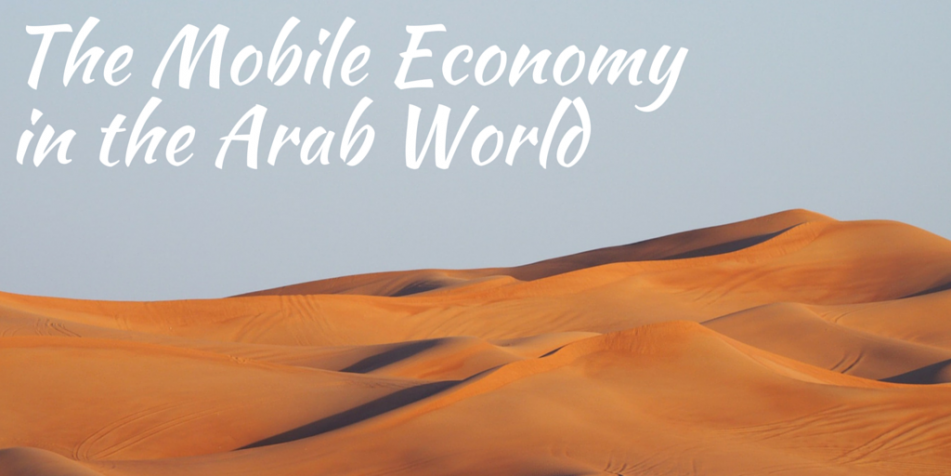 The Mobile Economy in the Arab World

The Middle East has always represented a global crossroads.

Whether with regards to trade, religion, as a marketplace of ideas or, sadly, in more recent years, a testing ground for some of the deadliest weapons in human history, the Middle East has always reflected the best and worst parts of the world in which it finds itself.

In the past the global crossroads in the Arab world has seen nations and peoples fight for control of the resources beneath the desert sands, and the people who call the region home.

Yet today the fight – despite what the television news might suggest – is less for control of the oil in the ground as it is for the eyeballs of the consumers in the region. With four (Qatar, Kuwait, UAE, and Saudi Arabia) of the ten countries with the highest per capita GDPs on Earth being found in the Middle East, the potential economic spoils are enough to encourage investment and development efforts from some of the world’s biggest companies.

And perhaps no other industry is riper for economic expansion than the mobile economy. A new report from GSMA Intelligence lays out the current state of the industry in the Arab world, the potential of the region for explosive growth, and the likely trajectories for employment, commerce, and both government regulation and investment in the sector, too.

It’s worth reading in its entirety, of course, but for a taste of what you’ll find, here are five charts from the report that demonstrate some of the most important trends in the mobile economy in the Arab world today. 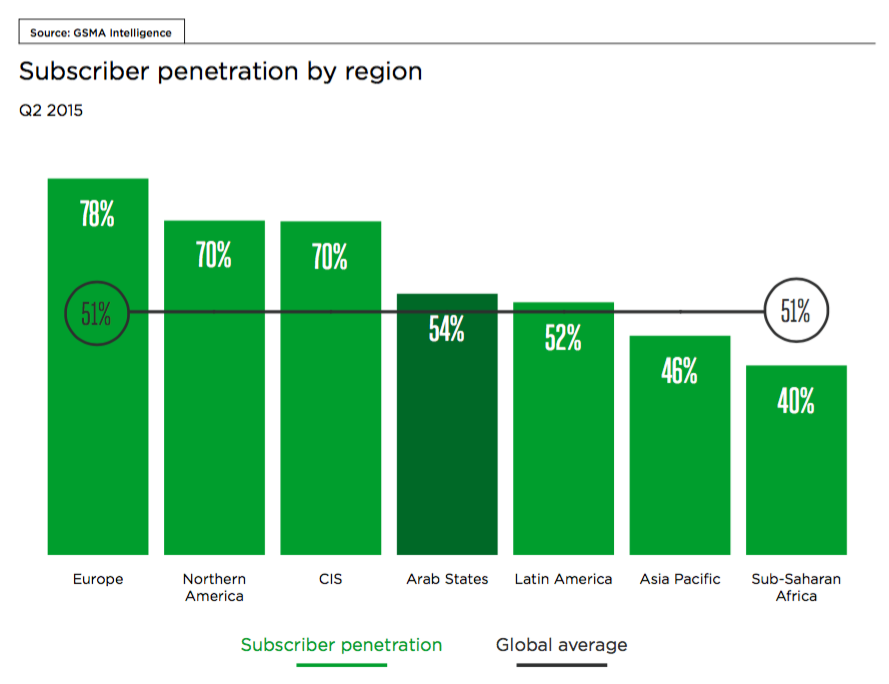 Start with the most basic metric – penetration – and it’s clear that the Arab States are right in the middle of the global statistics for the mobile economy. The 54% penetration rate in the Arab States is slightly above the global average of 51%, and while it is far behind Europe (78%), North America (70%), and the former Soviet Union (70%), it is significantly ahead of high-profile markets in the Asia-Pacific (46%).

The Take Away: The Arab world is ahead of most of the world when it comes to mobile penetration but this doesn’t mean that there isn’t more room for growth. A market expansion to US or Russian levels of penetration is the equivalent of a 25% expansion in the current subscriber base and represents a significant economic opportunity for both local and international operators. 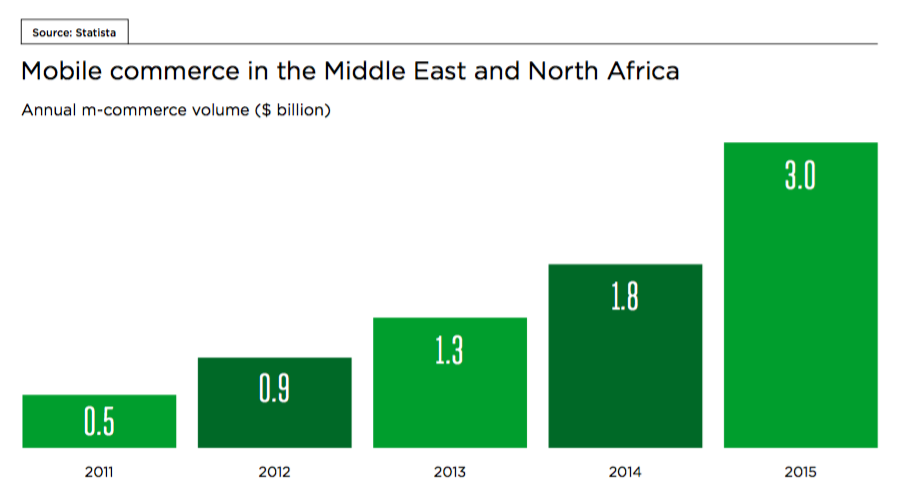 As the chart above demonstrates, mobile commerce in the Middle East and North African (MENA) region is exploding. In just a few short years it has developed from just half a billion dollars to a region-wide total of $3 billion. Significantly, this is no ‘one-year wonder’ but a steady expansion in mobile commerce averaging around 60% year-on-year for the past four years.

The Take Away: Business is booming in the mobile sector in the MENA region and investors, developers, and startups can count on it continuing to grow. With the size of the market today represent something 6 times larger than the same market just a couple of years ago, there’s money being made in the mobile economy – and more to come. 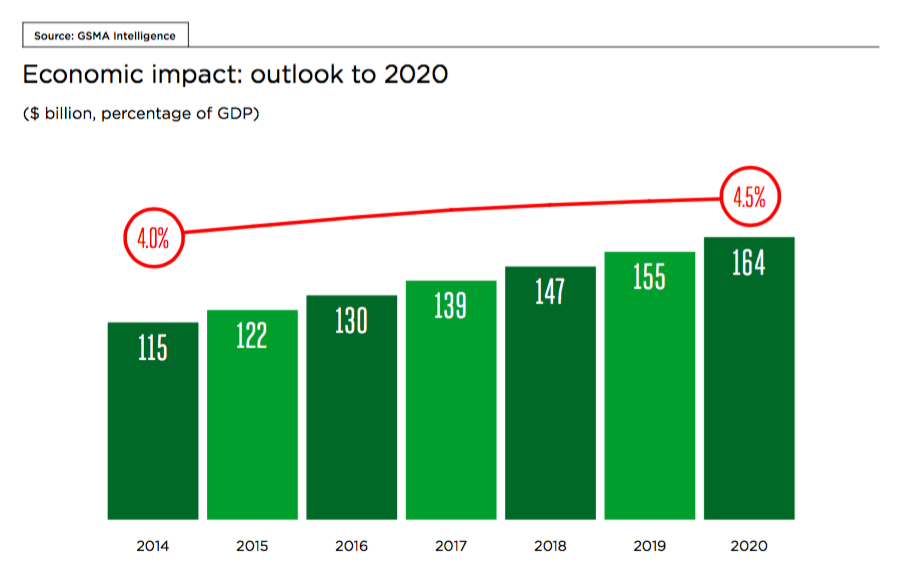 Mobile commerce might directly account for $3 billion in revenue, but indirectly it is considerably more. How much more? About $112 billion more. Today some 4% of the Arab economy flows directly or indirectly from the mobile economy, and that figure is expected to jump by more than 40% to more than $160 billion by 2020. What’s more, the mobile economy will grow in influence, too, as the proportion of the economy that the sector represents is expected to grow from 4% to 4.5% in just six years.

The Take Away: The mobile economy is big, and getting bigger. Energy might continue to be the foundation of the region’s economic strength, but the expansion of sectors such as mobile suggest that there is an evolution underway. What’s more, at more than $160 billion, we aren’t talking small cheese here: there’s money to be made in Arab world if you can develop a mobile or mobile commerce product. 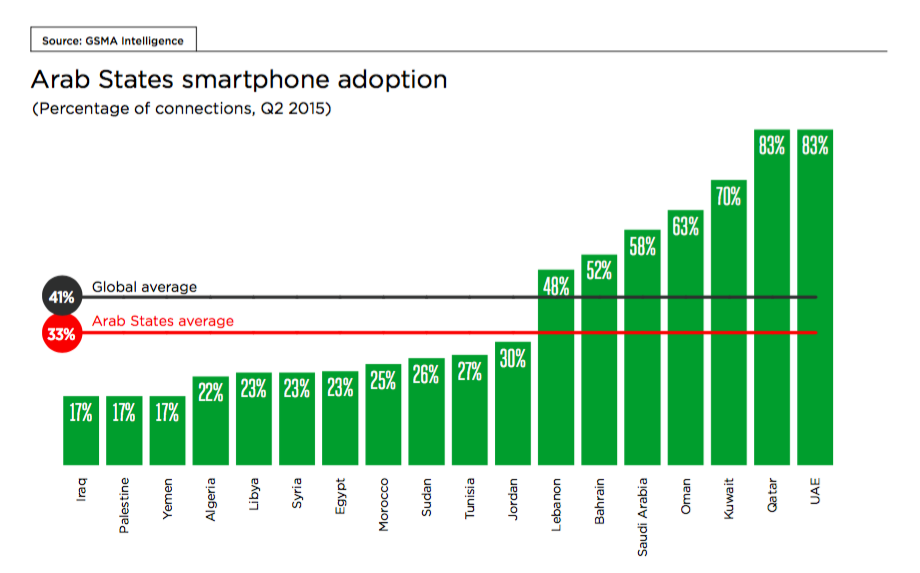 With the data so far presented it might be tempting to think of the Arab States as a single whole. When it comes to the mobile economy and mobile ecommerce, however, there are national differences that speak to both economic development and the effects of conflict and poverty. Take the penetration of smartphone technology, for example: while it takes some work to not buy a smartphone in the West, only a handful of countries in the Arab world claim much more than a 50% smartphone penetration rate. If you’re in the app business or expanding a mobile ecommerce site that relies on high-speed, modern smartphone technology, you’ll need to pick your national market with care.

The Take Away: Put it this way: Iraq, Palestine and Yemen are not the UAE and Qatar. Whereas finding a smartphone in Iraq is a pain (only 17% of mobile users have a smartphone) in the richest Gulf states iPhones and new Android phones abound (more than 8 out of 10 phones are smartphones there). In other words, while the mobile economy is booming in the Arab world, the smartphone is not yet ubiquitous.

Where social networks have penetrated in the Arab world there is one leader. No surprise: as almost everywhere else on Earth, the leading social network in the region is Facebook. Overall Twitter finds itself in second position, but with barely more than half the penetration and user base of their giant rival. Google+ has made some inroads in the region, but Instagram and LinkedIn are struggling to find their feet among the young and professionals, respectively.

The Take Away: If you want to reach out to the social media savvy in the Middle East and North Africa, you’re going to want to reach out on Facebook. No other social network gets close to the penetration and user base of Mark Zuckerberg’s site, and while Twitter and Google+ are non-negligible competitors, even combined they cannot compete with Facebook.

There’s an opportunity to grasp an expanding market in mobile technology and commerce in the Middle East, and there’s plenty of money to be made doing so. A growing subscriber base, increasing penetration into key markets, exploding smartphone use (at least in some sectors), and a social media market that is dominated by one player but with others showing potential, this is one region not to be ignored.