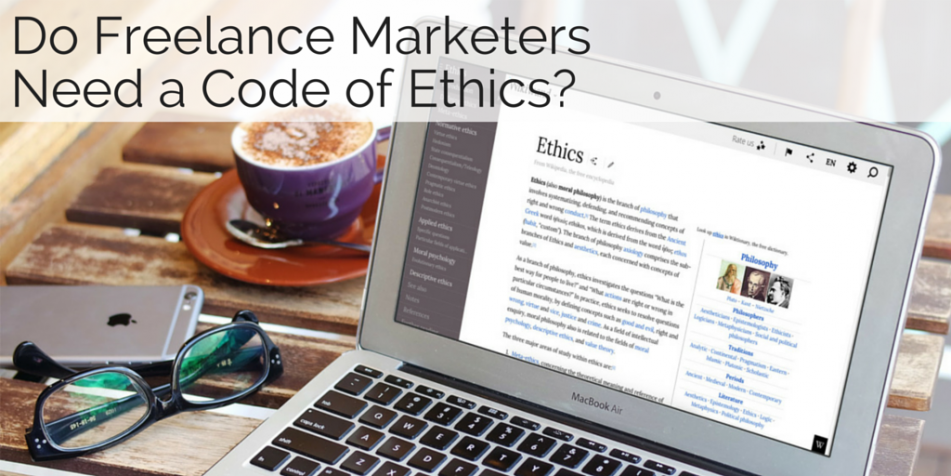 Do Freelance Marketers Need a Code of Ethics?

What do doctors, lawyers, Olympic athletes, and the US Army have in common?

The answer is that each of them have their own code of ethics.

And right now there is no widely accepted code of ethics for freelance marketers.

As companies continue the trend towards outsourcing and prosourcing, and as digital marketers around the world undertake projects both locally and internationally, some have argued that an industry wide code of ethics would be useful. It would also provide a basis for improved trust between freelancers and the companies that employ them and clarify the expectations that each group has of the other.

But what would a freelance marketers code of ethics look like? And what sort of impacts – positive and negative – might be imagined?

In this post we’ll answer these key questions and argue that a code of ethics of freelance marketers is something that would benefit the entire industry, and especially the freelancers themselves.

Do freelancers need to act ethically?

This is the first question to answer, but it’s an easy one. The only answer for a freelancer that wants to work with clients in the long term is yes. Ethical business practices are and essential and anyone seeking to get to the top or even just make a living by practicing their trade unethically is going to be found out quickly, and just as quickly dispatched as a work partner.

Do freelancers need a code of ethics?

Some people might answer this question by saying no, it’s not necessary. After all, freelancers manage their businesses the way that they prefer – that is one of the best things about being a freelancer, after all – and adhering to someone else’s way of doing business is a restriction on that freedom. Even if a code of ethics was in line with what a freelancer truly believed, adhering to the code would mean they would still be bound to someone else’s conception of ethics. Some marketers would feel that the code didn’t go far enough, others would find it too restricting, and others still would find it problematic to apply to an industry that is so diverse in the first place.

On the other hand, there is certainly some value to be found in applying a code of ethics industry wide. It allows clients to trust that the marketer they employ on a freelance basis has the same standards for ethical behavior as the previous freelancers they’ve employed. It would also go some way to avoiding some of the less ethical practices in the industry becoming commonplace, and it would be seen as a mark of seriousness for freelancers working in a world where credential checking is difficult at the best of times.

But imagine that a code of ethics was pursued by the freelance community – and imagining that the logistical issues surrounding writing such a code could be overcome – let’s consider what that code of ethics might look like.

What might be included in a code of ethics?

While the code is complete, there are some issues in applying it across the board with regards to marketing. For one, parts of the Code of Conduct relate to the Freelancer.com site alone. For another, as freelancers on the site undertake contracts in areas far more diverse than the already broad church of marketing, not all of the components would be required or even useful for the marketing industry alone.

Laura Spencer at Writing Thoughts wrote on the ethics of freelance writing, and suggested a code of ethics that covered the following areas:

Spencer adds a fifth area, kindness, for which she explains, “Time and time again, I read something online, only to scratch my head and wonder why it needed to be said at all. The only purpose seemed to be to garner “shock” traffic. This is NOT professional writing.” In the world of content marketing this might separate Spencer from many of her peers, but it deserves further discussion and is perhaps analogous to the constant debate in scientific circles as to whether, because one can do something, one should.

Spencer, though, does not seek to offer a code of ethics for all marketers, and instead refers only to the experience of freelance writers. She does write elsewhere on broader ethical issues relating to freelancers, raising the following points:

All could conceivably be included in a freelance marketers code of ethics.

Dr Nicola Davies of the Trusted Writer Consultancy is a freelance contractor writing and creating content with a focus on health and healthcare journalism. She has developed a personal code of ethics that runs twelve points, the first nine being:

Interestingly, the final three points commit Dr Davies to working within the professional codes of ethics of other institutions and organizations depending on the contract she accepts. For example, counseling work is conducted under a counsellors code of ethics, while journalistic contacts adhere to a code of ethics for journalists.

This points to some potential issues (to be explored a little later in this post) as to what a code of ethics for freelance marketers should be. With the breadth of marketing activities and the expansion of what can be considered ‘marketing’ by a contracting party, developing a ‘marketing only’ approach may be limiting in the extreme.

The American Marketing Association (AMA), though, does have a marketing-only approach to ethics, and it has published a statement of ethics. The statement commits marketers to:

Rather than leave those values undefined, the AMA explains that they include:

There is much that all of these codes have in common. Let’s state the obvious ones for good measure:

Outside of these there are some points of difference. The notion of good citizenship, for example, of the AMA endorses ‘fair trade’ for workers in developing countries. With much freelance marketing undertaken by professionals in the developing world who often rely on their labour cost advantages relative to the West to get a foot in the door, this could be controversial. Similarly, where Freelancer.com warn against under-bidding others this is specific to their site; in the wider and competitive world of online freelance marketing winning a bidding war by undercutting a rival is part and parcel of a competitive marketing, er, market.

These differences, though, don’t suggest any challenges that cannot be overcome. Rather they are areas for debate, discussion, and further research. The core values that all of these codes, and others, have in common, however, seem to have some real value as the basis for a freelance marketers code of ethics, should one be considered valuable enough to develop.

There are plenty of good reasons why freelance marketers should consider moving towards an industry-wide code of ethics. Something less site-specific than Freelancer.com, something more broad than a writing-specific program, and something simpler and more international that the AMA standards is possible.

But what do you think: should there be a freelance marketers code of ethics? Let us know what you think on Twitter!