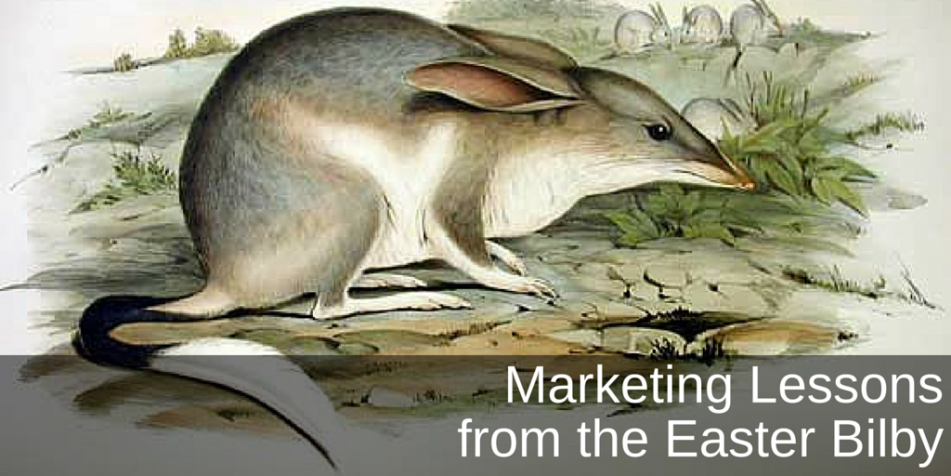 Marketing Lessons from the Easter Bilby 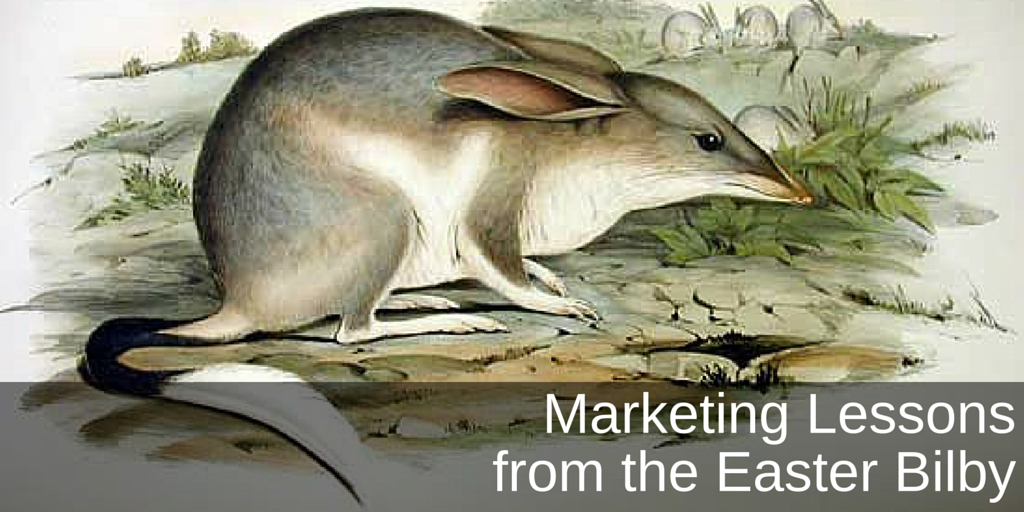 A common tradition across the world at Easter is the Easter egg hunt. Children wake early, grab their basket, and take to the garden to seek out the chocolate eggs that the Easter Bunny has hidden during the night. Some time later the children will return with smiling faces, full baskets, and start work on the chocolate-induced coma that should keep them quiet all afternoon.

But not in Australia.

In Australia the Easter Bunny has a rival, or perhaps a companion, known as the Easter Bilby.

And the story of how that Easter Bilby came to be, and how the Easter Bilby developed into a marketing phenomenon all of its own, is a case study worthy of review for event marketers around the world.

In the United States and in other parts of the western world the Easter Bunny is a beloved springtime visitor. Rabbits are not only cute, cotton tailed creatures common to parks and countryside alike but they are also commonly kept as pets. They nibble on carrots and star in Loony Tunes cartoons, with Bugs Bunny and the Easter Bunny competing for the mantle of ‘America’s favorite rabbit’.

Not so in Australia.

In Australia rabbits are an introduced species that wrecked havoc on the country, its environment, and its native plants and animals. Here’s how Wikipedia describes the damage:

Since their introduction from Europe in the 19th century, the effect of rabbits on the ecology of Australia has been devastating. They are suspected of being the most significant known factor in species loss in Australia. The extent of plant species’ loss is unknown at this time though it is known that rabbits often kill young trees in orchards, forests, and on properties…Rabbits are also responsible for serious erosion problems, as they eat native plants, leaving the topsoil exposed and vulnerable to sheet, gully, and wind erosion. The removal of this topsoil is devastating to the land, as it takes many hundreds of years to regenerate.

As you might imagine, rabbits are not the most popular of animals in Australia. Indeed, efforts to halt the spread of rabbits in the country have included a continent-spanning fence stretching more than 2000 miles or 3500 kilometers, poisoning, shooting, and even biological warfare. Really.

Hence, while a rabbit arriving in gardens each Easter in the northern hemisphere might be a welcome Easter treat, the same rabbit appearing in Australia could be a sign of a particularly bad moon rising. The Easter Bunny, suffice to say, has an image problem in Australia.

An image consultant will tell you there are at least two ways to deal with a client so desperately unpopular that the general public is supporting its extermination by poisoning. The first is to dig in, seek to change the discourse, go on a nationwide listening tour, and donate a lot of money to charity. Maybe through in a mea culpa or three, too. The second is to bid farewell to the client and get set to work with someone else.

In 1968, a 9-year-old girl in Queensland, Rose-Marie Dusting, wrote a story, “Billy The Aussie Easter Bilby,” which she published as a book 11 years later. The story helped catalyze the public’s interest in saving the bilby, and by 1991, the Foundation for Rabbit-Free Australia began their Easter Bilby campaign to replace the Easter bunny with true native wildlife.

“It seemed ludicrous to be promoting an introduced rabbit in a positive way as the ‘Easter bunny,'” says Paton.

A bilby does resemble a bunny, at least to a certain extent. They have a similar shape, a similar gait, and the ears are prominent on both animals, if more pronounced in the bilby. If there’s a native Australian animal that could slide into the Easter Bunny’s cultural space then the bilby is a strong candidate, and it didn’t take long for the chocolate makers and Easter event marketers to get on board.

Refashioning chocolate into different shapes to suit a local market is one way to adapt to different cultural traditions. For example, while Lindt sells chocolate Easter bunnies in the United States it also sells chocolate hens in France and bells in Italy. For chocolate makers in Australia it might have been a simple matter of tooling and printing to turn their Easter bunnies into Easter bilbies, but this would have been unlikely to change consumption habits.

Instead, what chocolate makers did instead was link their new take on Easter chocolate to the increasing concern for the environment – and disdain for the rabbit – among Australians by donating a portion of each Easter Bilby sold to preservation and environmental protection efforts.

One Australian chocolate maker, Haighs, explains the idea behind the campaign this way:

The Bilby is a very cute little creature, native to Australia. This small burrowing bandicoot used to be found in its millions, living across 70% of our country. Sadly, over the past 200 years settlement and clearing, plus the introduction of rabbits, foxes and feral cats, pushed this animal almost to extinction – in fact, entirely to extinction in South Australia…

In 1991 Rabbit Free Australia developed and registered the Easter Bilby campaign to raise awareness of the damage done by rabbits to native wildlife, and to raise money from royalties of Easter Bilby to fund their research programs. In 1993, we joined forces with them. Haigh’s Chocolates stopped making chocolate bunnies and made Australia’s very first Easter Bilbies – an immediate hit with our customers.  For over twenty years we offer large and small Bilbies in both milk and dark chocolate at Easter, with part proceeds from every sale donated to RFA for their very important work…

Thanks to increased awareness and lots of hard work by a number of organizations and government departments, the Bilby is starting to make a comeback. In South Australia, where the Bilby was once extinct, there are now estimated to be over 1500 Bilbies back in the wild.

From extinct to 1500 wild animals? That’s an effective campaign for the bilbies as a species and for Haighs and other chocolate makers, too.

Learning from the Easter Bilby Campaign

The success of the Easter Bilby project should not make the challenge that marketers faced in attempting to convince shoppers in Australia to eschew bunnies and instead choose bilbies. Specifically, the challenges were:

This is a very different challenge for a marketer than promoting or selling a product that is functionally better than the established alternative. For the Easter Bilby there is no functional difference in terms of the taste of the chocolate, and even the shape of the chocolate is basically the same.

The selling point, then, and the marketing campaign is centered on something that the Easter Bunny cannot deliver for the consumer: an environmental dividend.

It’s something that the existing product cannot realistically match (the rabbit is the pest, after all) and even a pledge to donate part proceeds to the protection of the bilby and other native species would seem forced. And after all, if there is no differentiation between the Easter Bunny and the Easter Bilby, why would anyone buy the second mover on the environmental front?

In reality, it’s a masterpiece of event marketing that the Easter Bilby is now a mainstay in the Australian consumer mind and referenced around the world as a distinct Australian Easter tradition.

Not bad for an idea that only arrived in the 1990s, right?

If a marketer is going to challenge an established cultural tradition by offering an almost-identical alterative then they need to leverage a point of difference that cannot be matched. In the case of the Australian Easter Bilby the marketers were able to leverage an environmental payoff that could not be replicated and that allowed them to gain a cultural foothold in an otherwise closed cultural space.

And like the bilby in the Australian wilderness, the Easter Bilby is now established as an essential part of the marketing landscape each Easter in Australia.