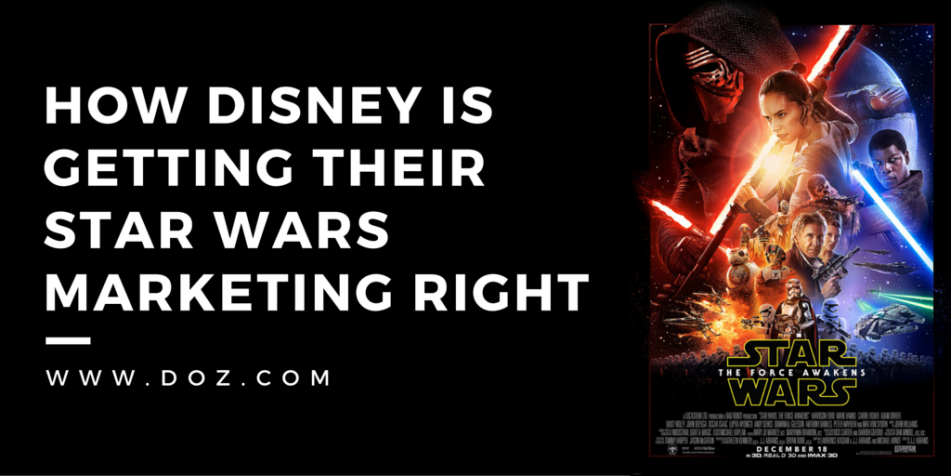 How Disney is Getting Their Star Wars Marketing Right

A couple of months ago I introduced you to Jeremy.

At the time, Jeremy was an intern at DOZ having arrived at the company fresh from completing a degree at Rider University (Go Broncs!) in international business and marketing. Since then he’s impressed the boss and carved out a permanent place in the team as our Lyon-based Sales Executive and we’ve got to know a bit more about the guy who spends his weekends mixing it up on the soccer pitch with friends and teasing his colleagues about the dismal performance of their preferred pro soccer teams.

But it hasn’t been professional soccer that has held most of Jeremy’s attention these last few weeks. Like so many others around the world there have been two words running through his mind constantly.

With the imminent arrival of the first new film in the Star Wars franchise self-described fans of the series like Jeremy have been busily booking opening-night tickets, viewing and then reviewing YouTube trailers for The Force Awakens, and drinking in the mountains of coverage that the film is receiving around the world.

Like any true fan, Jeremy has seen the first official trailer, the Twitter-exclusive TV spot, the Japanese trailer, and compared and contrasted all three. He’s excited to see the movie, can’t wait for opening night, and has already paid for his tickets.

All of which tells me a couple of things.

First, he’s a true fan and, frankly, I wouldn’t be surprised if he turns up to the premiere wearing a Chewbacca costume.

And second, Disney has done an excellent job marketing one of the most eagerly awaited films of 2015.

Indeed, in this post I’ll explain the three things about the approach to marketing that Disney has taken that can serve as best-practice pillars for digital marketers: drip feeding, social attention, and a global focus.

In times past a studio like Disney would focus their marketing on the premiere of the film. Whether that was a red carpet in Cannes, a Los Angeles extravaganza, or a series of premiere screenings with the stars of the film hopping city-by-city across North America and Europe, the premiere was where it was at.

But times have changed, and consumer tastes have evolved, too.

Today’s cinema fan doesn’t want to arrive at a film knowing nothing about it except for the name of the headline stars. Instead, they want to be drip-fed details of the film from the moment a production deal is inked to the moment they walk into the theatre and the lights go down. Today’s generation, after all, have more, better, and faster access to media than any generation in history, and they expect the movie studios to use those channels to reach out to them.

This context is the reason that Disney released movie posters online ahead of them arriving in cinema halls, why they released an official trailer before an official TV spot and before a Japanese trailer, too. It’s why Disney has developed hundreds of hours of promotional video, outtakes, behind-the-scenes footage, and documentary film to drip-feed to fans well before the actual film ever arrives in cinemas.

Disney understands that the single-shot premiere is no longer appropriate for a media savvy and media hungry world, and that drip feeding movie details to fans in the weeks and months ahead of the film’s release is a far better means for creating buzz.

Proof? Heck, just ask Jeremy or any of the other millions of people who have clicked and consumed the trailer on YouTube!

The story continues this December. Check out the first official TV spot for #StarWars: #TheForceAwakens. https://t.co/RwqDZMeNTQ

Disney has invested a lot of money in a website for the new film, but this doesn’t mean that they expect their fans to arrive on the site to get their fix of Luke, Leia, and Han. Disney has recognized that asking the fans to come to them is not the most efficient marketing technique and, instead, they should be going to where the fans are.

And the fans are on social networks.

Is it any surprise then that Disney has invested heavily in social media marketing ahead of their new film? Whether it is Twitter, Facebook, encouraging shares of their video footage from YouTube, or releasing social media exclusives like the Twitter trailer, Disney is investing their marketing dollars where they will do the most good – on social media.

So what is missing out?

Television, for one. And print media, for another.

Simply speaking, Disney’s target audience for the film will know the film is premiering in a cinema near them not because they read about in a newspaper (though they probably did) or because a TV news reporter did a story on the film (though they likely have), but rather because their friends are talking and sharing about the film in the same place they talk and share about everything.

Proof? The social conversation around the film has been so overwhelmingly positive – everything from the film’s poster to the trailer to an effort to allow terminally ill fans to see the film ahead of its release date – that Disney is riding a wave of social media positivity all the way to its already huge pre-sales success.

You’ve heard it all before but it bears repeating: this is an interconnected world we’re living in and nothing is truly only ‘local’ in the ‘global’ internet age.

Hence, if you want to market the Star Wars franchise only to Americans, you are going to have the proverbial bad time. Anything that is uploaded for the American market is going to be shared within minutes, maybe even seconds, with fans of the franchise in Europe, Asia, Africa, and most everywhere else. The same applies for advertising elsewhere: you can be sure that American fans are going to go bananas for most anything that relates to the movie no matter what language or cultural context it is created for.

So when Disney dropped a Star Wars trailer especially for the Japanese market it was only a matter of time – minutes, maybe hours – before the trailer found its way onto the screens and smartphones of fans around the world. It was watched, then watched again, dissected, translated, and responsible for a global buzz that Disney surely anticipated when delivering the trailer to the world’s third largest film audience for the franchise (numbers one and two are the US and China, it seems).

By understanding the interconnections of the global world Disney can make incredibly efficient use of its marketing budget. There’s no need to cut three or four different trailers for the US market, and another three or four for the Japanese market and assume that they will only be viewed in one locale. Instead, riding the wave of the global internet age and the buzz that emerges from any major marketing push almost anywhere, Disney could release a single trailer in Japan and be almost guaranteed it would be see around the world, too.

And, yes, Jeremy is one of the thousands of French fans who ate up the Japanese language trailer that has now been seen many more times outside of Japan than it has (or will) be seen in the country.

Disney has cracked the digital marketing code and created a buzz around their new Star Wars film that hasn’t been seen since perhaps the release of the last film in The Lord of the Rings franchise. It’s drip feeding of fans, attention to the social side of film promotion, and its acknowledgement of the power of taking a local product to a global audience has seen the studio not only sell out premiere sessions around the world, but also begin a profitable drive in everything from ticket sales to merchandising, toy sales and digital downloads well before the opening bars of the John Williams score blast out of cinema speakers.

And Jeremy, like fans around the world, are now counting down the last few days until they can see the fruits of all this marketing in a galaxy far, far away…