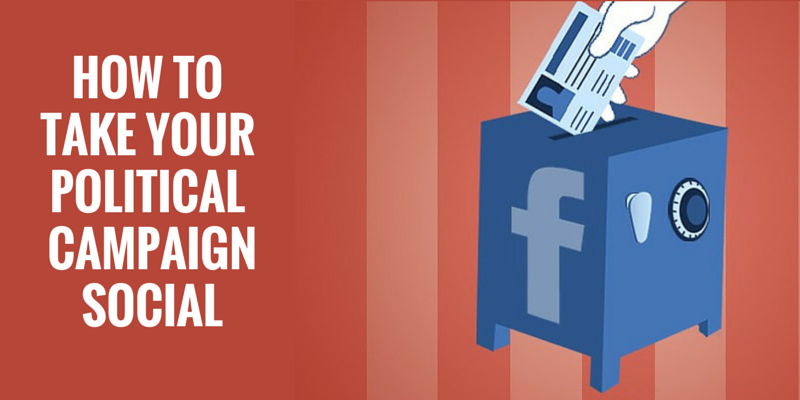 How To Take Your Political Campaign Social

Reaching out to voters is the key to a winning political campaign. Candidates need to make contact with voters where they spend their time, be it in front of a TV, in the pages of a newspaper, or increasingly online.

When it comes to reaching those voters online there are many different approaches that a campaign can take. Certainly every campaign needs a website, and most will find that a blog penned by a candidate (or ghostwritten for them) is a useful tool for explaining policies in plain language. An email newsletter can be helpful for keeping supporters motivated and especially useful for fundraising.

But there is one area that campaigns have come to attach increased focus to in recent years and with good reason: social media.

Studies have reported that more than 70% of adults use social networking sites, with even greater levels of use reported for adults aged under 30 (89%) and between 30 and 50 (82%). With the cost of engaging voters on these networks dropping close to zero and the social audience doubling in number in just the last 4 years, it is little surprise that political campaigns have turned to social media in an effort to bring voters onside.

In this post we dive deep into the research and explore the ways in which social media have helped political campaigns in the past, and how you can take advantage of social media to win votes in your own run at high office.

What Makes Digital Outreach So Effective?

In a 2011 study researchers were able to identify the ways in which campaigning on the internet and via social media were especially effective compared to traditional campaigning. They found that:

There certainly seem to be good reasons for engaging voters via the internet and social media, but will it necessarily pay off on election day?

There’s some evidence to suggest that the more active a candidate is on social media, the more success they are likely to enjoy.

Indeed, as supporters become more excited about a campaign on social media and as candidate engagement with voters drives interest, it is even possible to predict which candidate will come out on top. One study even concluded that social media was almost as good at predicting election winners as traditional polling, with the advantage that social media numbers can be influenced right up until election day.

Another study from the Netherlands found that politicians with higher Social Media engagement got relatively more votes within most political parties. The researchers concluded that “there seems to be a powerful influence from Social Media on reaching and influencing voters” but cautioned that using social media does not always result in a more effective political campaign.

How Should I Go Social?

Virginia-based sales and advertising firm Intermarkets pulled together a list of 7 best practices for the use of social media in political campaigns that neatly summaries what to do, and what not to do:

If you are going to engage on social media you have to do so socially. It is of little use to arrive on Twitter, spend a few days tweeting, responding to voter questions, going all in on hitting back at rivals and then…nothing for a week. Consistent communication is the first step towards social media success so after you have your platforms set up, use them.

There is a world beyond Facebook and voters can be found there. However, the realities of a political campaign mean that limited resources need to be apportioned where they will do the most good. There is little use in mounting dozens of social media profiles on dozens of different sites only to focus on the one or two you really understand and have time for.

Every social media network has its own messaging norms and practices, and the audience you’ll reach through the network expect certain unwritten rules to be recognized. The short bursts of communication that Twitter’s 140 character limit enables are less useful on Facebook, and the hashtags that abound on Instagram and Twitter aren’t as useful on YouTube.

As Intermarkets explains, “Social media shouldn’t be a bullhorn you use to blare your message out at the world—it’s more like a ticket to an event where you have the chance to connect with your voters, donors, and supporters on a one-on-one basis.” Keep in mind you are communicating with voters, not talking at them. Social media offers near unrivaled options for conversations with voters online, so make sure you are listening when they talk to you.

Social network allow advertisers to target advertising incredibly effectively. Want to reach a sub-set of voters with an interest in a particular policy area? Targeted advertising through a social network like Facebook allows you to reach only the voters who you want to reach. Forget broadcasting – this is narrowcasting in the extreme and an incredibly useful tool for any political campaign.

Walls of text are not the best way to engage voters. If they wanted to read 3000 words about your stance on an issue they could download your political platform. So when communicating via social media it is important to remember the visual impact of your posts. Use images, video, and create graphics to support your tweets, posts, and publications. Your voters will thank you with increased engagement, sharing, and support at the ballot box.

Social media changes quickly and what works today on Facebook or Twitter might not work next week. Your social media team should be sure to stay on top of changes to the terms of use of any of the networks you use to engage voters, and should be aware of the trends that are emerging on these platforms throughout your campaign.

Follow these steps and you’ll be set for a great social campaign – and hopefully a winning one at the ballot box, too.

This week DOZ is exploring the nexus between marketing and politics, with a particular emphasis on political campaigning online. Click through everyday as we look at the way the internet has changed political campaigning, the key points that a politician needs to get straight with their campaign manager, the importance of social media to online campaigns, and five times that the internet played a big role in a political story.