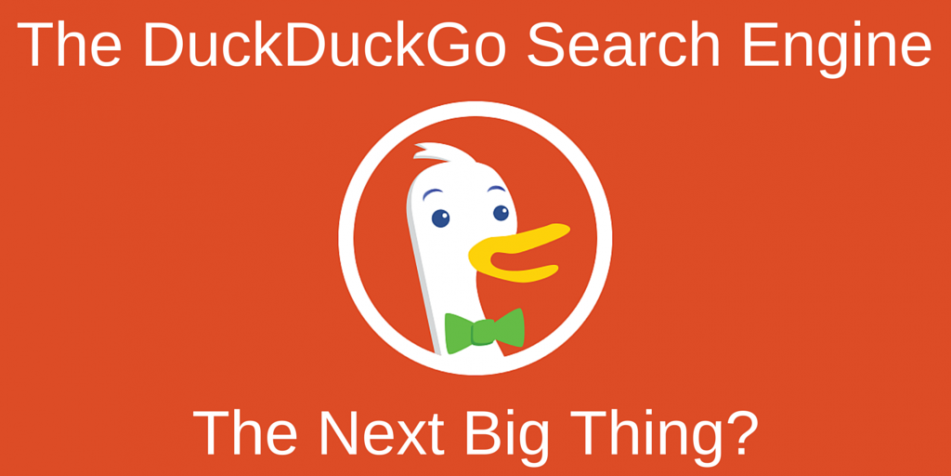 The DuckDuckGo Search Engine: The Next Big Thing?

When it comes to search engines there is one player that dominates all the rest: Google.

So dominant is Google that it is only in a handful of countries around the world that a significant competitor to the behemoth from Mountain View exists, and even then it is usually still fighting just to maintain market share. When even major players in global search such as Yahoo! and Bing struggle to compete despite deep pockets and long experience in the search game it seems unthinkable to launch a new search engine and expect it to take a serious slice of Google’s cake.

Or perhaps that should be almost unthinkable, because that is exactly what the little search engine that could, DuckDuckGo, has set out to do.

And they might just be on their way to achieving their goal.

DuckDuckGo doesn’t boast a grand company campus in Silicon Valley and it doesn’t trundle along at Google’s impressive one-company-per-week acquisition schedule. It doesn’t allow itself to get distracted by driverless cars, wearable computers, or launching social networks that sparkle then fade. Instead, it’s headquartered in the almost anonymous Paoli, Pennsylvania, counts less than two-dozen employees, and is focused on one thing: search.

The company was founded by Gabriel Weinberg in September 2008. Weinberg had correctly surmised that it would be impossible to compete with the established search engines and their massive indexes developed by web-crawling bots. Google, for example, indexes nearly 5 billion webpages, with millions more added every week. A small startup, especially one that at the outset consisted of only Weinberg himself, could not hope to compete with Google on scale.

But there was an opportunity for Weinberg to compete on how those results were served to people who were searching. The minimalist Google search page quickly gives way to a page cluttered with advertising, promoted and sponsored like, information boxes, and the first ten of potentially millions of results. Sorting through all of this clutter means a less than ideal search experience, and it was here that Weiberg felt he could care out a niche.

As the DuckDuckGo founder told Fast Company, “When you do a search, you generally want an answer. You don’t necessarily want to click around links. It’s our job to try to get an answer. Our grand vision is that that happens for 80% of queries, even for very niche things.”

DuckDuckGo quickly found a niche group of users who enjoyed its Instant Answers – something akin to a Wolfram Alpha response to a question like ‘how tall is Michael Jordan?’ (6’5”) that appears at the top of a search page – and clean, crisp user interface.

Yet while its audience grew, warnings appeared in the technology press that, in the world of search, all it took for a major player like Google to render a small upstart like DuckDuckGo redundant was the adoption of a similar functionality. If Google adopted something similar to Instant Answers then DuckDuckGo would be DuckDuckGone unless it had another unique selling point.

The headline in The Guardian made things crystal clear: DuckDuckGo traffic soars in wake of Snowden revelations.

In the two years since former American NSA operative and now fugitive Edward Snowden revealed how deeply the privacy of everyday citizens was being invaded via their own technology, online privacy has become a significant concern of many around the world. Users were shocked to find that the internet companies they treated with their files, their email, their photos, and their communications had either knowingly or unknowingly shared this information with intelligence agencies in the US and elsewhere.

More generally, people were made more aware of how the companies they trusted tracked their online life, serving up advertising and recording generic but personally identifiable meta-data about individuals that could be on-sold for profit, or used to take advantage of a user’s habits. One company, Google, came to represent this corporate invasion of privacy more than any other. So popular, effective, and ubiquitous were their free applications such as Gmail, Google Docs, and the Android smartphone OS that merely having a Google account rendered a person subject to tracking that would have been rejected as a clear invasion of privacy if implemented by government decree.

And so people started looking for an anti-Google, a search provider that would not track their location, search history, or modify the search results that were served based on prior history or interests, and thus trap the user in a filtered bubble of reinforcing information.

The anti-Google they found was DuckDuckGo.

As Weinberg would tell CNBC, “We always knew people didn’t want to be tracked, but what hadn’t happened was reporting on the private alternatives. So it’s no surprise that people are making a choice to switch to things that will give them great results and also have real privacy.”

Privacy quickly became DuckDuckGo’s primary unique selling point. Unlike Google and other search engines, DuckDuckGo did not retain user data, it didn’t care where you searched from, what you searched for last week, or record any identifying information that might be requested by authorities. As the South China Morning Post put it:

DuckDuckGo’s privacy policy states that it “will comply with court-ordered legal requests”, not unlike Google’s own privacy policy. But DuckDuckGo follows with: “However, in our case, we don’t expect any because there is nothing useful to give them since we don’t collect any personal information.”

DuckDuckGo has managed to establish itself as the search engine for fast, anonymous search online. It doesn’t place cookies on a users computer to keep a track of a search history, it doesn’t log the IP addresses behind search terms, and even clicking on a link on a DuckDuckGo search results page won’t reveal to the site behind that link what led you to their site.

DuckDuckGo is able to do this because its business model is very different to Google, Yahoo!, Bing, and other players in the search market. Google’s entire business model, for example, is built on the back of its targeted advertising reach. By tracking users, their preferences, their search history, their use of different applications, and the keywords they seek information about online, Google can determine exactly what advertising those users might like to see, and serve those ads to the individual user. For the company placing the advertisement they are sure they are targeting a usually interested and likely qualified customer. Google, as the middleman in the customer/advertiser relationship, takes a cut. Google, therefore, must know as much as possible about the people searching through their site; it needs to in order to make any money at all.

DuckDuckGo, on the other hand, does not have access to any of this data by choice. In order to monetize, then, it simply serves advertising on its search results pages that are in line with the keywords sought by users. Hence, if you search for the term ‘car’ it is possible you’ll see an advertisement for a car. If you search for ‘car new york’ then you’ll likely see advertising localized to the Big Apple. But the advertising that will be served is based on the search term, not the searcher themselves. hence DuckDuckGo has no need to track the user data; it just doesn’t need to in order to make money.

Hence, while it is possible that Google, Yahoo!, Bing and others might imitate DuckDuckGo’s Instant Answers feature, or develop a user interface similar to DuckDuckGo’s to woo prospective users, it is almost impossible for them to successfully adopt a privacy policy similar to DuckDuckGo’s. To do so would be to lose the ability to make money at all, and so it’s no surprise that privacy stands as DuckDuckGo’s primary unique selling point today.

!Bangs: The DuckDuckGo Search That Isn’t On DuckDuckGo

One of the search engine’s key innovations has been the introduction of ‘bags’, stylized by the company as ‘!bangs’.

DuckDuckGo explains the concept and operation of !bangs like this:

!Bang commands perform your searches directly on other search engines. Sometimes you know you want to go directly to another site to search, and these commands save you steps in doing so.

For example, suppose you wanted to search Amazon.com for ‘bags’. In that case, you could just enter ‘!a bags’ into DuckDuckGo and we’ll take you right to the correct search results page on Amazon.com.

If you’ve adjusted your region in the Settings menu, your !bangs will automatically direct you to the site for that region, if available. For example, if Germany is selected in the Settings, then !amazon will go to amazon.de.

A !bang search for Amazon is one thing, but DuckDuckGo has similar bangs for more than six thousand sites today. As with any other DuckDuckGo search, a search with a !bang command remains encrypted and personal details are not divulged to the site in question. Amazon won’t know who is searching for bags (unless you have remained logged into their site and have retained their tracking cookie for when you arrive) and it is a time saver, too: unlike a Google search for “bags amazon” which will return a page of links for bags on the Amazon site, DuckDuckGo sends you straight to the relevant results on the Amazon page.

Users can submit their own ideas for a !bang and thousands have been accepted by the company, meaning the the possibilities of DuckDuckGo !bangs is essentially infinite.

As are the search results pages.

Infinite Scroll (or, Everyone On Page One)

The pressure for businesses and website owners to appear on page one of a Google search engine results page is immense. Studies have shown that more than 95% of users click on a result on the first page of search results they encounter and so not being one the first page can be deadly for a business. Ranking 11th is almost as bad as not ranking at all for a keyword was the vast majority of users searching for that keyword will never click to go to page two of the results.

With DuckDuckGo there is no such problem.

DuckDuckGo by default employs an infinite scroll interface. The first page of results is the only page of results, and it is just a flick of a scroll wheel to move down the list. This encourages users to consider the 11th, 12th and 13th results – perhaps even more – as there is no need to click on page 2, 3 or 4 as on Google. While a good ranking is still important, when the 11th result is only a line away from the 10th result instead of a page, it makes it a little easier on business while providing more relevant results for users with every search.

The Next Big Thing in Search?

DuckDuckGo is in the right place at the right time with its privacy-first approach to web search. As users become more aware of their privacy online and offline, and as they become more wary of internet and technology companies abusing their significant power over their personal data, companies like DuckDuckGo are well placed to grow, and then grow some more.

With a business model that doesn’t rely on tracking users and strategy that can be profitable with only a small fraction of the total search market, DuckDuckGo might be the next big thing in search. Time will tell whether they can continue to rise, but all signs look positive for DuckDuckGo to DuckDuckGrow.

Have you used DuckDuckGo? Will you return to Google? Tell us in comments below or on Twitter!