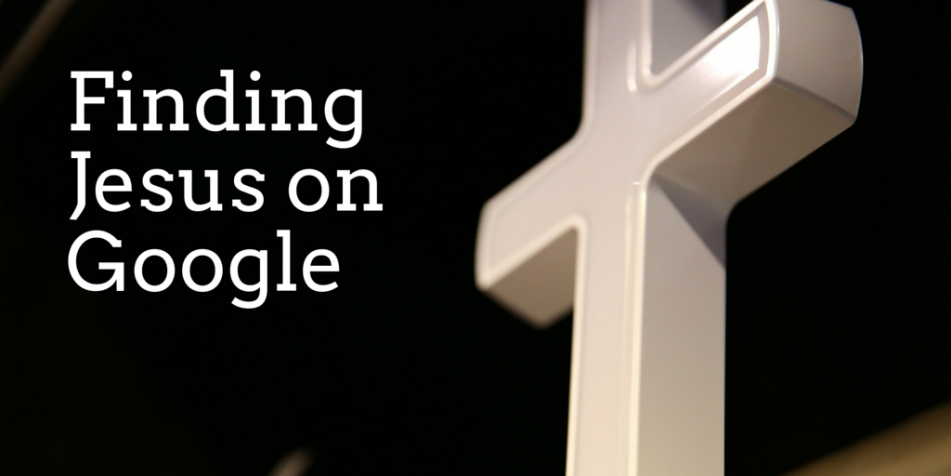 Finding Jesus on Google – Part I

This is Part I of a two-part post. Tune in for Part II tomorrow.

Let’s start with the numbers.

Christianity is the world’s largest faith by sheer weight of numbers with more than 2.5 billion of the planet’s 7 billion people declaring themselves a Christian.

Easily the largest of these Christian denominations is the Catholic Church which counts roughly half of the world’s Christians in its 1.2 billion strong congregation. Protestants account for much of the remainder, representing around 800 million people, while major Orthodox Christian churches count more than 350 million adherents.

But while of these traditions are Christian, to talk of these denominations in general terms denies the diversity of each.

The world’s 1.2 billion Catholics, for example, are not members of a single church but rather dozens of different churches practicing different Catholic rites, with different religious traditions, and even including a half dozen ‘breakaway’ Catholic churches.

The rich diversity of these traditions in the world means that a person claiming to be a follower of Jesus Christ could be a member of one of the world’s largest churches, part of a smaller national church, or even a member of a church that claims only a few thousand members globally. Indeed, talking theologically, the only thing all of these Christians have in common is a shared faith in Jesus Christ.

Which makes it rather peculiar that one of the smallest churches in the world has managed to find themselves at the top of Google searches the world over for those two words: Jesus Christ. Indeed, two of the top three results on Google’s search engine results page (SERP) for the phrase ‘jesus christ’ are from this same, relatively small denomination of Christianity, the Church of Jesus Christ of Latter Day Saints, also known as the LDS Church or Mormons.

How did this relatively small church manage to out rank every other church on Google?

How is it that one of the most competitive keyword searches is dominated by results pointing to this confession?

And what can the church’s success in rising to the top of one of Google’s most competitive pages teach SEO’s about successful search engine marketing?

In this post we’ll answer all of those questions and explain some of the reasons why – when you Google for Jesus – you find yourself at the Mormon church.

Before diving too deep into how the LDS Church ranks so high for a competitive keyword like ‘jesus christ’ it’s worth reviewing just what the SERP for that phrase looks like.

Like so many Google SERPs the first link on the page for the keyword ‘jesus christ’ is advertising. The advertisement for the Little Creek Fellowship takes anyone who clicks to the website of a small, Adventist congregation in Clayton, North Carolina.

Next in line – and the first of the organic results – is the Wikipedia article on Jesus.

Surprised? You shouldn’t be. Wikipedia links are authoritative, linked widely, and are often the default reference point for online articles. It’s not always perfectly accurate, but it’s usually pretty fair and, if it’s detail you are after, then the 28,000-word entry on Jesus should satisfy all but the most ravenous amateur theologians.

And then, in second position, is the first non-paid, and non-Wikipedia link. It points to a site (jesuscrhist.lds.org) that is owned and maintained by, as the snippet suggests, the Church of Jesus Christ of Latter Day Saints. Of Google’s 175 million results for the keywords ‘jesus christ’, this is the page that outranks everything except Wikipedia.

Next on the SERP are news stories pulled directly from Google News.

If you are searching Google with an eye on what is happening in the right now rather than the hereafter, Google News has you covered. On this day the news about Jesus was fairly benign: a US presidential candidate with a painting of a smiling Christ, a link from a conservative opinion page, and a preacher reassuring his flock that heaven awaits.

Following the news is a relatively new addition to Google SERPs: a Google generated dropdown list of common search queries with snippet-length answers pulled directly from sites that the search giant finds reputable. These dropdowns may be useful for search engine users but remain controversial for content creators who see extracts of their content presented on the SERP and, as a result, may miss out on the clicks, visits, and traffic that a well written content piece can deliver.

Keep scrolling and you’ll find the next organic results for the keywords. 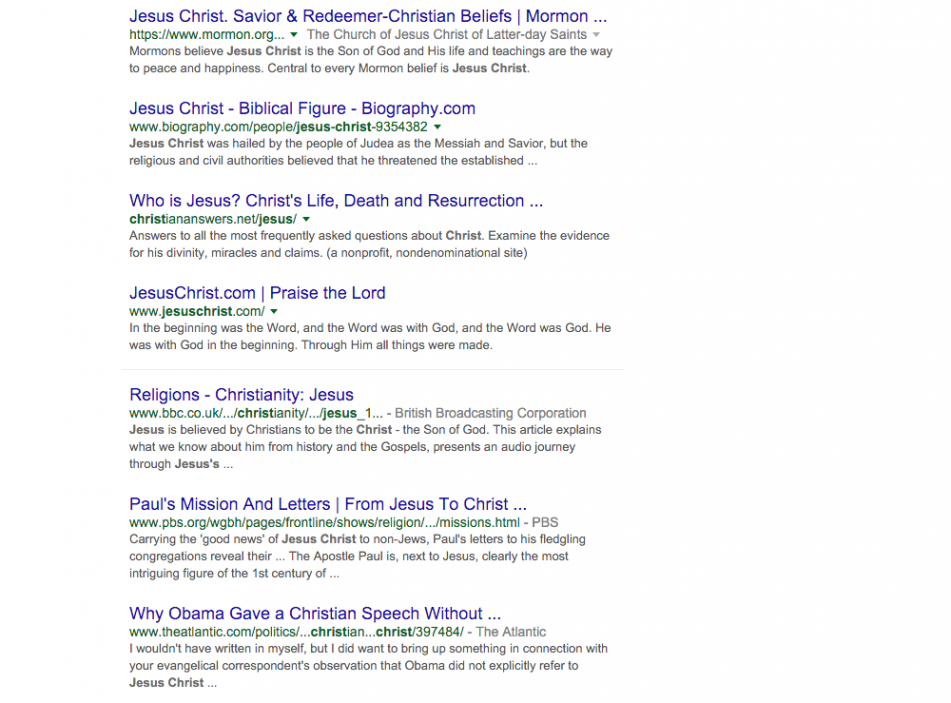 Well the top result in this part of the SERP is a page on the mormon.org site, another Church of Latter Day Saints property. If you’re keeping score then that is two of the top three organic results pointing to the same Christian church.

For a church that counts perhaps 15 million adherents worldwide and represents just a little more than one-half of one percent of the global Christian faithful, this is extraordinary.

Further down the top results are links to Biography.com (similar to a for-profit version of the Wikipedia article), major media properties (BBC, PBS, and The Atlantic), ChristianAnswers.com (for the Christian seeking answers, one suspects), and in position 6 the website JesusChrist.com where you can sign up for your own, free @jesuschrist.com email address in just a few steps.

Hence, if you take away Wikipedia, news stories, and general information sites, there’s only one Christian faith on the first page of Google results for the keyword ‘jesus christ’, and that’s the Church of Jesus Christ of Latter Day Saints.

How did they achieve a ranking that Google has not bestowed on the far larger, more popular, and well-known Christian churches?

We started our analysis of the top-ranking LDS Church sites by looking at the backlinks that the sites have earned from other websites on the internet. This information is available via online services that specialize in keyword research and search engine optimization, and our preference in this regard is Majestic SEO. 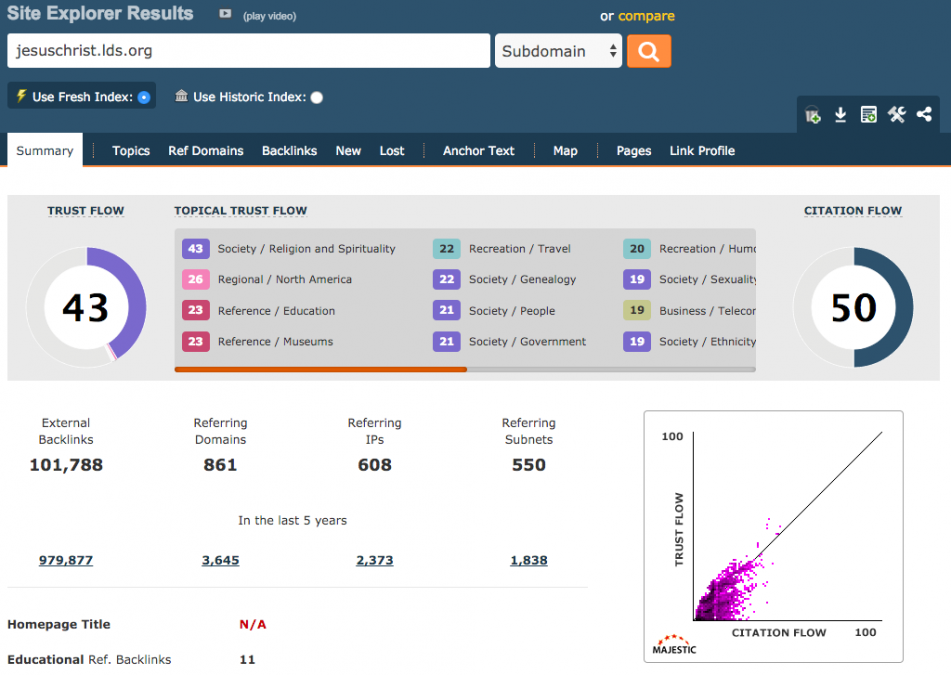 Pulling the key numbers from this data suggests that the first reason that the Mormons rank so well are their extensive backlinks to a specific page (jesuschrist.lds.org). Indeed, that page has more than 100,000 backlinks from nearly 900 individual domains.

Next to asses is the Majestic SEO Link Profile. By clicking on that purple-colored graph in the bottom right in the screenshot above we’re taken to another page of charted data that provides further details about the backlinks and the domains that supply them to the Mormon site. 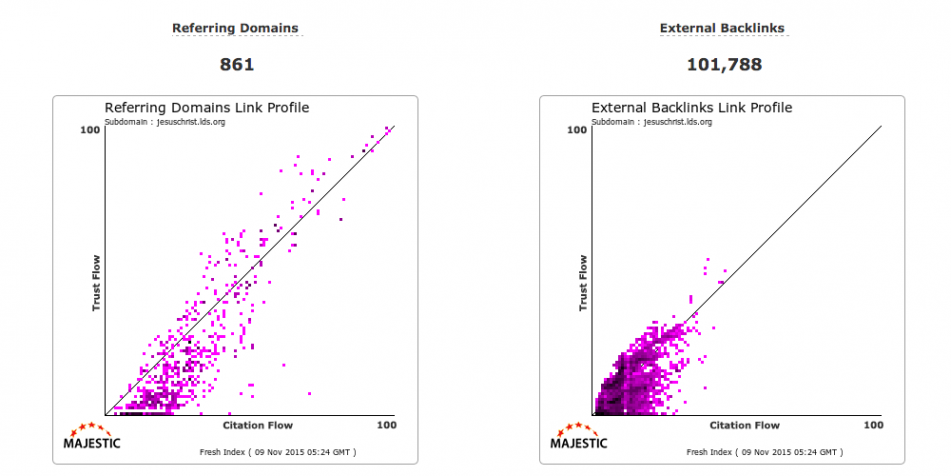 The x-axis in both charts represents the Majestic SEO Citation Flow, an internal assessment of the number of links each page or domain has. This is something like a proxy for the quality of the page, or where it might fall on a Google SERP. The higher the score and the more to the right of the chart a domain or backlink is, the more valuable that referring domain or page is.

The y-axis in both charts represents another Majestic SEO signal, this time being Trust Flow. Trust Flow is a measure of how trustworthy a site is likely to be and, while Google and the other search engines have their own measures and rankings of trust, Majestic SEO is largely in line with their findings and trusted sites (Wikipedia, university sites, academic sites, and government sites for example) are more valuable sources of backlinks than a newly launched personal blog.

For both charts it is far better to find yourself linked by sites that bunch in the top right corner (highly trusted and often cited) than the bottom left corner (less trusted and less cited).

Let’s dig a little deeper into the nature of those backlinks.

The Backlink Breakdown chart gives some context to the 100,000 backlinks that the page has earned. The vast majority, unsurprisingly, are text links, with a smaller proportion links from images. Almost every link is a do-follow link, signaling to search engines that the site is trusted and credible according to the linking site.

When it comes to anchor text – that is, the text that is highlighted and clicked to send the visitor from a referring page or domain to the LDS Church site – it is clear that there is power headed the way of the church’s page. More than 1 in 10 of the referring links use the keyword (jesus christ) as the anchor text, and more than a third of the anchor text includes either one or both of the two words in the keyword phrase, or the ‘naked’ URL of the LDS Church page.

That’s a lot of backlink juice and a big reason that the page has made its way to the top of the 175 million-strong Google ranking.

In Part II of this research coming tomorrow we’ll explain what else the LDS Church has done to make sure it is in SEO heaven.