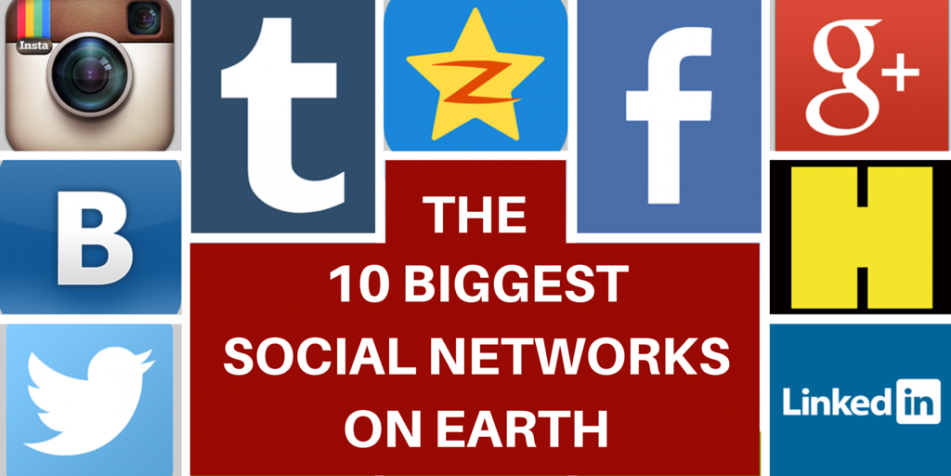 The 10 Biggest Social Networks on Earth

It’s an eternal question for Cosmopolitian magazine but, when it comes to social networks, the answer is surely YES.

Every social network begins with a single user. And all hope to expand to the point where that single user it but one of hundreds of millions.

But few get to that point, and the ones that do dominate the social media landscape in a way that their smaller competitors can still only dream of.

In this post we count down the 10 Biggest Social Networks on Earth that, combined, represent more than 5,5 billion user accounts.

Whether you have an account on every one of these networks or whether you’re still only just dipping your toe in the social ocean, here are the ten biggest social networks on the planet today.

But there are bound to be a couple of networks that are unfamiliar. Maybe their user base is regionally or linguistically focused somewhere where your focus is not. Or maybe it attracts a user that is older or younger than you.

To help you find your way through the list, then, we’ve added some additional information to provide a slightly broader picture of these networks.

You’ll see when they were launched, the sort of user they attract, whether they are regional or global concerns, why people join, and prospects for the network in the near future: are they getting stronger, weaker, growing, shrinking, or are they ready to explode?

Here in the DOZ office the average team member is present on about five of these ten social networks – how about you?

Future Prospects:        Strong in their niche. LinkedIn is the default social network for professionals in the West and while there are some regional challengers in France and Germany, LinkedIn has attracted a global user base willing to pay for their professional networking opportunities.

Future Prospects:        Tumblr is simple to use and makes sharing simple, too. Blogging and reblogging takes only a click, and building a Tumblr profile is the work of seconds, not minutes or hours. Tumblr powers some important blogs on major media sites, but suffers from a reputation that has been strongly influenced by a user base that trends towards the younger, less mature end of the spectrum. Relatively recent attempts to monetize the platform with advertising, though, have been somewhat successful so, for the moment, Tumblr is here to stay.

Future Prospects:        VK has established itself as a force to be reckoned with in the Russian speaking world. While sometimes referred to as ‘the Russian Facebook’, VK established itself as the market leader in Russia and the former Soviet republics and pushed Mark Zuckerberg’s global juggernaut into second place. Long term – and as the Russian market becomes more important to Facebook – VK may face stiffer competition, but its early-mover advantage will be hard to shake.

Future Prospects:        It’s difficult to see a long future for Habbo, at least relative to the other social networks on this list. Their teenage user base eventually tires of the gaming and the networking and moves out of the network, and Habbo relies on attracting younger users to replace them. If tastes in social networking change, technology overtakes what Habbo can offer, or if teenagers move away from the gaming side of Habbo altogether, then Habbo is toast.

Future Prospects:        Facebook saw the potential of Instagram and paid a pretty penny – $1 billion in pretty pennies, actually – to purchase the social network in 2012. This injection of capital, knowledge, and support pretty much guarantees that Instagram is set moving forward and there’s little chance that it will collapse anytime soon. More importantly, though, Instagram is getting its advertising and eCommerce elements in order which means sustainable revenues are (hopefully) not too far around the corner.

Future Prospects:        The future for Weibo is both strong and weak. It’s strong because with a user base of more than 300 million people and a an ‘in’ with the government in China (and a proven willingness to censor content when required by the Chinese Communist Party) there is some incredible traction from an early mover. On the other hand, Weibo’s expansion outside of China is limited to the Chinese speaking world, with the odd celebrity or politician seeking an outlet to speak to the Chinese people somewhat directly not withstanding. One to watch, in any case.

Future Prospects:        Qzone is to Weibo as Facebook is to Twitter: it’s not microblogging but a more traditional social network. Users are active, spend money on the platform, and this creates some real traction for the company moving forward. While it is limited in its geographic scope – again, confined mainly to East Asia – the company’s revenue streams are positive signs for the future of the network.

Future Prospects:        Strangely for a network that has more than a half billion users, Twitter’s future is far from assured. While it has established an incredibly high profile in the mainstream media and around social, political, and cultural events, Twitter has failed in attempts to monetize its platform thus far. Promoted tweets and advertising are creating revenue streams, but there are doubts in some quarters as to whether these streams will grow to the point where Twitter can prove its worth as a company valued at more than $8 billion by investors. Call it a 50/50.

Future Prospects:        The grand-daddy of social networks, Facebook is not going anywhere anytime soon. With a global footprint (save for a few countries where governments do not allow the American giant to operate freely) and a global brand to match, Facebook dominates social networking in a way that other networks can only dream about. When Facebook can buy up a social network like Instagram – also on this list – and still have billions to spare, it has established itself as a true technology giant. Facebook will continue to evolve, but it won’t disappear.

Future Prospects:        Weak. Does that sound strange? The world’s biggest social network with more than 1.6 billion users and we’re saying it has weak prospects? Sad, but true. Google+ has a large user base by virtue of Google’s own large user base for other Google products. Forcing users to join Google+ or pushing an account on them that sits largely dormant – effectively taking the ‘social’ out of ‘social network’ – means Google+ can claim a massive user base without the associated massive interaction. Unless Google gets serious about social, there’s not much hope that Google+ will ever be much of a force.

How many of the top 10 social networks on this list do you have an account? Is it more or less than our average of five in the DOZ office? Let us know in comments below!