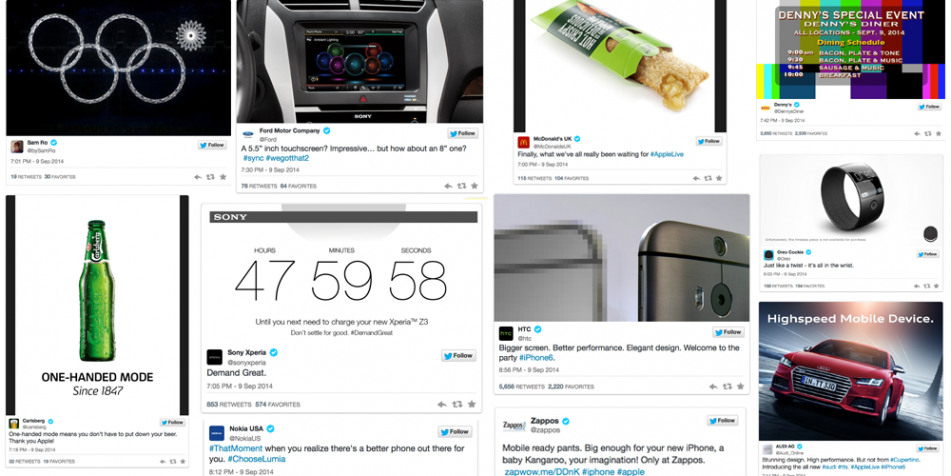 Yesterday at 10 am, Apple introduced a number of new products during a keynote at Flint Center. This is where Steve Jobs introduced the Macintosh in 1984 and the iPad in 2010. This time, Tim Cook and his team introduced two new iPhones, the iPhone 6 and the iPhone 6 Plus, as well as a new payment system known as Apple Pay and a wearable device called Apple Watch.

Over the years, we have seen typical arguments between Apple fans and Android fans, claiming one brand is better than the other. But for the last few months, we have seen a new level of interaction between brands reacting instantly to the news on social media.

Here is a selection of the best brand reactions to Apple’s keynote.

Finally, what we've all really been waiting for #AppleLive pic.twitter.com/XSsBj7PZQT

We had #ForceTouch before it was cool… #AppleWatch

Just like a twist – it's all in the wrist. pic.twitter.com/UDzFDAb78G

Mobile ready pants. Big enough for your new iPhone, a baby Kangaroo, your imagination! Only at Zappos. http://t.co/k0dBtgIRau #iphone #apple

One-handed mode means you don’t have to put down your beer. Thank you Apple! pic.twitter.com/IGIauKTbsz

We didn't reinvent the Apple, just the way we bite into it. pic.twitter.com/efIXMQTRjv

It is important to note, the Apple live stream did not go as planned and users watching the keynote from around the world had trouble accessing the livestream.