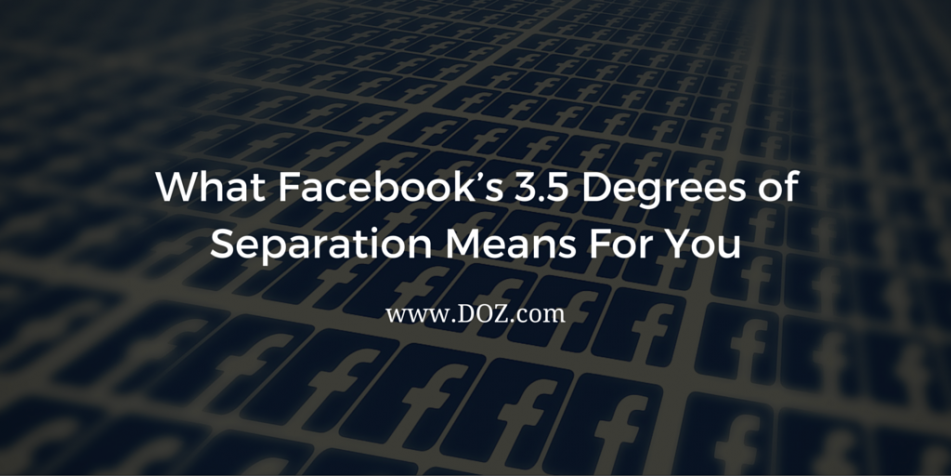 What Facebook’s 3.5 Degrees of Separation Means For You 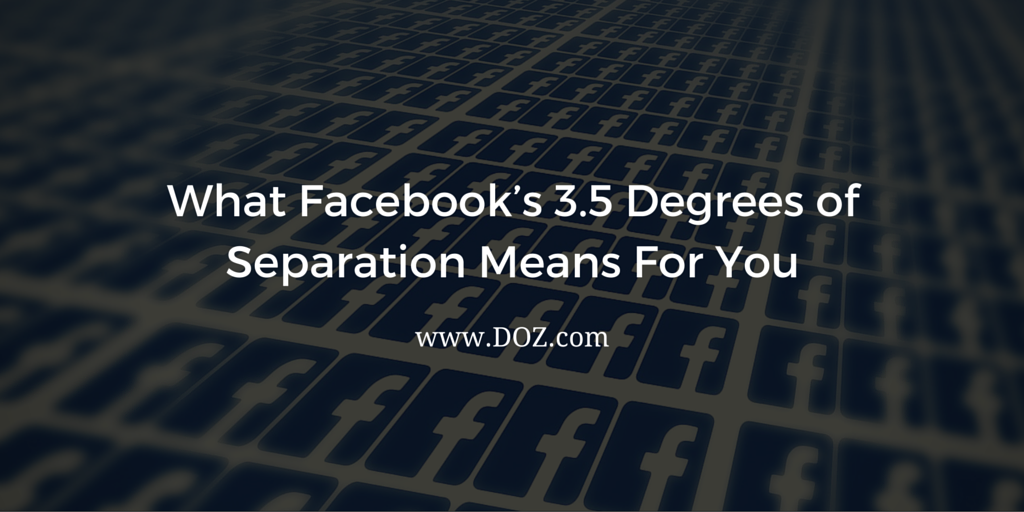 All this week on The DOZ Blog we’re celebrating Valentine’s Day. Today we dive into one of the social networks that has done so much to bring people closer and, yes, sometimes drive couples apart: Facebook.

In recent weeks Facebook has revealed some incredibly interesting research from its internal labs.

There was a study that demonstrated that people who communicate online feel better than those who are online but not communicating with others. There was research reporting that more gay Americans are coming out on Facebook than ever before. There was even a report on online laughter with a compelling case made that ‘haha’ is not the same as ‘hehe’ or ‘lol’. If you’re a date geek and a social media freak – or both – there was plenty of great research to dive into.

Last week, though, and in the run up to Valentine’s Day, Facebook released some new research that put the lie to a long-held cultural truth: the six degrees of separation, it seemed, is now outdated.

And unlike reports on the ubiquity of ‘lol’ and the mental health of people who use Facebook Messenger, there are some pretty startling implications for social media security and social media privacy.

The idea that every person in the world might be connected to any other person in the world by just a few steps is an appealing one. It suggests that there is more to connect us than to divide us, and this humanist perspective found its foundations nearly a century ago in the work of Frigyes Karinthy.

The Hungarian author wrote in a short story titled Chains of a world where it would be possible to pass a message between any two people by way of common acquaintances:

A fascinating game grew out of this discussion. One of us suggested performing the following experiment to prove that the population of the Earth is closer together now than they have ever been before. We should select any person from the 1.5 billion inhabitants of the Earth – anyone, anywhere at all. He bet us that, using no more than five individuals, one of whom is a personal acquaintance, he could contact the selected individual using nothing except the network of personal acquaintances.

The idea caught on and sociologists, anthropologists, political scientists, mathematicians and dreamers alike pursued it across the twentieth century. However, despite the academic interest, it was not until a theater piece written by American playwright John Guare that the idea of a closely connected world found widespread appeal. As one of Guare’s characters in the play Six Degrees of Separation put it:

The idea caught on in the cultural zeitgeist, and inspired everything from episodes of Lost to the game Six Degrees of Kevin Bacon wherein every Hollywood actor can be linked to Kevin Bacon via connections with co-stars.

Three and a half degrees of separation?

Here’s how the researchers put it:

In honor of Friends Day, we’ve crunched the Facebook friend graph and determined that the [average degree of separation] is 3.57. Each person in the world (at least among the 1.59 billion people active on Facebook) is connected to every other person by an average of three and a half other people. The average distance we observe is 4.57, corresponding to 3.57 intermediaries or “degrees of separation.” Within the US, people are connected to each other by an average of 3.46 degrees.

Our collective “degrees of separation” have shrunk over the past five years. In 2011, researchers at Cornell, the Università degli Studi di Milano, and Facebook computed the average across the 721 million people using the site then, and found that it was 3.74 [4,5]. Now, with twice as many people using the site, we’ve grown more interconnected, thus shortening the distance between any two people in the world.

The math on this initially surprising result is surprisingly simple. Imagine you have an individual on Facebook with 300 friends. If that persons friends also have 300 friends, and those 300 friends have their own 300 friends then, in just degrees of separation the number of linked individuals is potentially huge:

And at the fourth degree of separation?

If your average Facebook user has 300 friends then it takes only four degrees of separation to reach 8.1 billion fourth-degree connections.

And as a reminder, in February 2016 the global population is just 7.4 billion.

More than a fun factoid to reveal to disbelieving friends and relatives (via a Facebook status update, natch) there are some important implications for security and privacy on Facebook for users to consider.

Facebook’s privacy settings allow for selective sharing of content. It is possible for users to choose on a case-by-case basis the audience for their status update, photo, or other content, though most people take a set-and-forget approach to their sharing.

Next, understand that according to Pew research, the average Facebook user has 338 friends.

Now, consider the potential audience for a vacation photo of yourself and three friends you tag:

So, at one end of the sharing scale you have one person (you) and at the other end of the scale you have a billion people (everyone). But in the middle – and this is the option that many people choose – the potential audience can be more than 100,000 strong.

And a lot of people don’t realize this number is quite so big, nor do they want their images to be accessible to a group this large. Or consider another example: that photo from the family reunion where the entire 12-person clan is tagged?

If you allow friends of friends to access that image, then the potential audience is more than 1.3 million.

Facebook’s research in incredibly interesting but should serve as a reminder that sharing on Facebook can quickly result in a big audience for your images, status updates, and content. With the entire Facebook community less than four steps removed from any other user, sharing content to friends and friends of friends can result in potential audiences that are well beyond what many might expect.