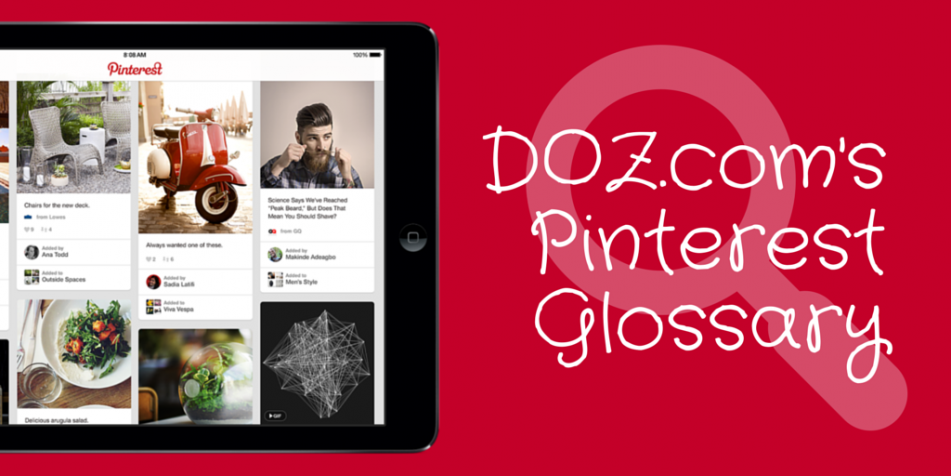 While most social networks are relatively intuitive, there are always a couple of things that seem to invented only to confuse the novice user, especially one only coming onboard some years after the network launched. Sure, some things can be the same – a like button here, a hashtag there – but usually there are a bundle of different terms you need to get a handle on quickly just to know what is going on.

Today we aim to help you negotiate the nouns, verbs, and adjectives in the world of Pinterest.

Pinterest is an image and media sharing website that allows users to collect, share, browse, and comment on images and media collected by others. It is membership only – though membership is free – and the five year old network boasts nearly 100 millions users and more than a billion pins.

One of the most attractive features of Pinterest for social media marketers is the user base that trends strongly female. Unlike competitors like Facebook and Twitter, Pinterest attracts many more female users than males, with recent surveys reporting that 80% of Pinterest users are women, and more than 90% of the pins are made by those women.

Brands love Pinterest’s visually stimulating interface and, as Hootsuite has noted, there are good business reasons to engage with the Pinterest community:

Pinterest users have proven that they trust their Pinterest networks to endorse solid products. These people trust their networks so much, in fact, that 47% of U.S. online consumers have made a purchase based on recommendations from Pinterest.

If these figures seem attractive – and why wouldn’t they be? – then you’ll need to understand the language and vocabulary of Pinterest and Pinterest users. Without further ado, here’s our guide to navigating the Pinterest lingo.

Pinner
That’s what Pinterest calls their users, the people who do the pinning. There are hundreds of millions of pinners in two hundred countries worldwide.

Board
You’ll need to pin your media to something, and on Pinterest that something is a board. You can organize your media across different boards, and typically pinners do so by category. For example, you might have a ‘Travel’ board, a ‘Bucket List’ board, and a ‘Fashion’ board, each with its own collection of relevant images.

Pin
On Twitter you tweet, on Facebook you post, and on Pinterest you pin. The word can refer to the act of adding an image to your board (‘Pin this’) or a specific image on a board (‘Check out this pin’). Warning: once you start pinning it is hard to stop!

Repin
Again, a comparison: on Twitter you can retweet someone else’s tweet if you like it, and on Pinterest you can repin something you like from another person’s board. Let your imagination run wild and don’t limit yourself to the boards of friends. Search keywords and phrases to find the perfect pin to repin from across Pinterest.

Like
See a pin you like? Well let the pinner know. Clicking like works much the same as a like button on any other social network and signifies your appreciation of a pin while giving the pinner a heads-up that they are posting good content.

Comment
Inspired by a pin? Why not leave a comment for the pinner. Let them know that you like it, that you have something similar on one of your boards (great for networking), or take the conversation in a different direction altogether. Remember that Pinterest is a social network, so work on communication and sharing in comment threads

Mention
Like other social networks, you can tag Pinterest users in a conversation or a pin by adding a pinners username with a mention. They’ll get a notification that you mentioned them and be able to jump to where on the network you did. It’s a great way of bringing a pin to the attention of someone else, or making sure a friend gets to see something you’ve pinned just for them on one of your own boards.

Follow
Like what you find on someone’s boards? A fellow pinner consistently finding fantastic images right up your alley? That’s someone you need to follow so you can find all their pins as and when they make them. It’s something akin to a friend on Facebook or following someone on Twitter, and many pinners follow dozens of friends, brands, and celebrities.

Secret Board
You’ve got boards that are visible to everyone, and secret boards that are not. A secret board is visible to the person who creates the board and anyone else with an invitation to view that board. It’s a way of sharing without letting everyone else in on the fun. It makes sharing ideas for a birthday present possible between a group of friends without the birthday boy or girl suspecting a thing, even if they are also a keen Pinterest pinner.

Map Boards
Working with FourSquare, Pinterest allows pinners to create map boards. Pinners can connect pins to a map, linking an image or media with a place. Have a great image of a concert venue? Pin it to a map so others can find it. Think of it as a sort of Google Street View but with images you’d want to see rather than just whatever was outside when the Google car passed by.