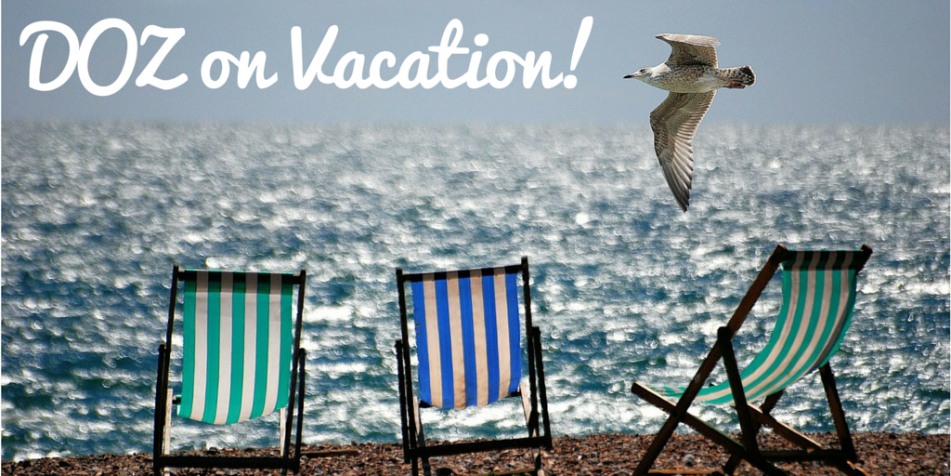 It’s summer time and the DOZ team is going to relax a little bit.

Don’t worry: we’re not leaving all at once – there’s always going to be a team on-board to make sure the platform is running smoothly, and that clients and marketers are satisfied. But in between weeks at work the team will be enjoying their DOZ vacation in various places across France, Europe, the US, and Africa.

With temperatures in DOZ’s Lyon headquarters hitting the high 90’s and even topping out over 100°F a couple of times in the past month, it’s no surprise that some members of the team are heading for the coast.

Corporate Development chief Thibault is leading the charge, heading for the Île de Ré near the French town of La Rochelle. He plans on catching up with old friends and family, fishing, boating, taking some long bike rides, and enjoying the sun in his favorite part of France.

Community Manager Cécile is also heading west. After a week in France’s Basque Country she’ll head to the Sables d’Olonne. She’ll spend time with family and enjoy the long days by the beach, eating traditional food from the region, and relaxing in the sun.

Accounts Manager Ben is also heading to beach, but he’s going south to the Mediterranean instead. After a week relaxing with his girlfriend in the sun he’ll head to the west coast to spend time with family in the city of Bordeaux before returning to Lyon.

Sales Executive, Jeremy is heading south, too, to St Tropez with his girlfriend to enjoy the summer sun. He’ll go swimming and is looking forward to pleasant bike rides in the sunshine and eating ice cream on the boardwalk.

DOZ’s Administrative and Financial Manager Monique is breaking with the rest of the team and heading north instead. She’ll be passing her vacation in France’s Brittany region where she plans on exploring the waters by boat and letting her stress float away on the waves.

Not everyone is heading to the beach to cool off.

Operations Assistant Justin is heading to his family home in Lozère to spend time with friends. Lozère is far from the coast but he’ll still be getting wet with plans including canoeing, rafting, swimming and – when he returns to dry land – some friendly but competitive games of pétanque.

Stateside, Customer Success Manager Diana hit the waters off Alaska for a week of kayaking, exploring glaciers, and stopping every once in a while to read a little, too. Perhaps the ultimate way to chill out on those hot northern summer days?

Web Developer Gary is heading to the Ardèche region of France to the Lac d’Issarlès to see friends and family. He’ll be swimming, sunbathing, and playing pétanque, too. The Tour de France is passing close by so Gary will try and catch the riders when they do.

Content Manager Dylan is also going to be catching up with the cyclists in the Tour de France, but he’ll be in Paris. With family flying in from his native Australia he’ll be playing tour guide on the last weekend of the race, before heading south-west to the beach.

Some of the DOZ team will be traveling a little further afield this summer.

Designer Hafid is flying out for Morocco and the warm sun of the north of Africa. He’ll pass his time relaxing with his family and enjoying the beaches on the other side of the Mediterranean.

DOZ CEO Anji is also traveling to north Africa, but instead of Morocco he’s headed to Tunisia. He’ll be catching up with his family, eating fine local food, and will find time to squeeze in some fishing, too.

Lead Operations Carine will be staying in Europe but still heading to the coast when she arrives in Portugal. Some time in the city of Seirós to see family and enjoy barbecue cookouts, before a few days in Porto with friends.

DOZ CTO Faouzi is jetting off for sunny Barcelona, Spain, before heading further south to Morocco. He’ll enjoy the sun, the sand, and catching up with family.

Finally, Product Developer Eric will be enjoying his relaxing summer break taking care of his newborn son at home in Lyon. With temperatures hovering around 35°C or 95°F in Lyon, let’s hope he keeps himself and baby in the shade.

Wherever you’re headed for your summer vacation, the DOZ team wish you a happy and safe break!

Heading somewhere exciting for summer or just lazing around on the beach? Let us know your plans on Twitter!