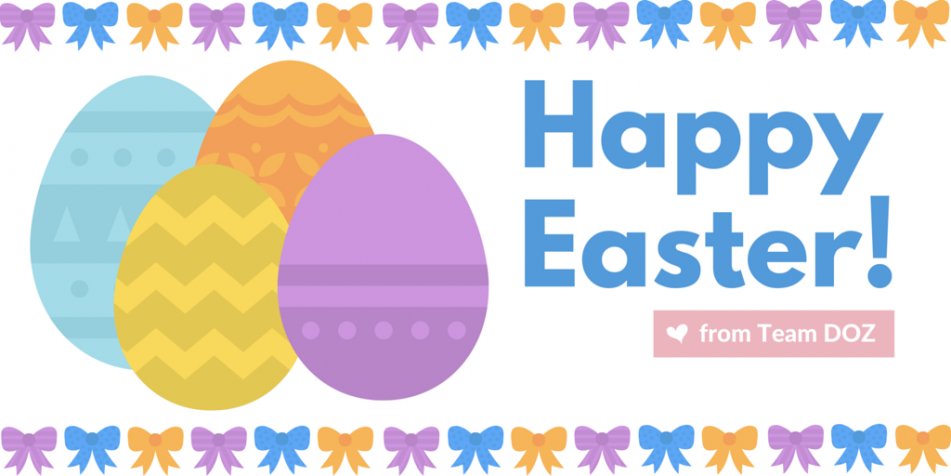 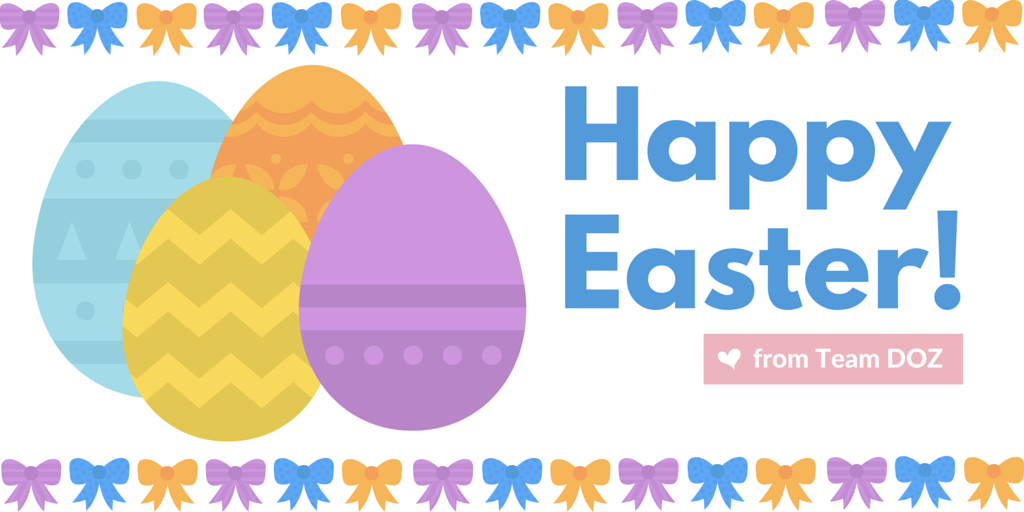 Spring has sprung and it’s time to celebrate with some Easter chocolates and plenty of fun and games with the DOZ team.

As regular readers of The DOZ Blog would know, DOZ works with clients around the world – 21 countries and counting right now – and all of those countries celebrate holidays in a slightly different way. We know that the New Year is not celebrated quite the same in China as it is in Australia, and that the Fourth of July is a national holiday in the US, while meaning very little to someone in Germany.

So how will DOZ clients around the world be celebrating their Easter this weekend? Read on!

While many in the United States might associate Easter with chocolate eggs, Easter egg rolls, and egg hunts in the garden, in Louisiana things are little different. In the south the tradition of egg knocking is still a part of some communities as people compete to see whose egg is the strongest.

Egg knocking is pretty straightforward. The crowd of competitors pairs off and groups of two people knock eggs together. The egg that suffers a cracked shell first is out and the winner advances to face another winner from a different pair. The match-ups continue until there is a ‘knock off’ between the final two eggs left, with a winner emerging pretty quickly afterwards.

It sounds like a lot of fun but don’t be fooled: locals take their egg knocking very seriously. As one site revealed, keen competitors don’t use store bought eggs but hunt for local chickens with a reputation for quality. They’ll even go as far as to lift the calcium levels in the chicken feed to encourage stronger shells and use some knowledgeable ‘tapping’ with the teeth to sound out the best eggs.

Want in on all the fun? The biggest and best of the egg knocking competitions take place in Marksville, LA.

Back in 2012 a columnist in the Guardian mused that, for almost anything you can think of, “the Germans have a word for it – and it’s a very long one”. It’s a little tongue-in-cheek, of course, but in the case of the Easter traditions in that Central European country, the argument holds.

Yes, while children around the world hunt in gardens for the Easter eggs that friendly bunnies have left for them, in Germany the eggs are suspended in the trees. As Wikipedia reports, “The tradition in Germany to decorate the branches of trees and bushes with eggs for Easter is centuries old, but its origins have been lost. The egg is an ancient symbol of life all over the world. Eggs are hung on branches of outdoor trees and bushes and on cut branches inside.”

The Germans don’t joke around with their Easter egg trees, either. This isn’t a tradition that sees little effort expended but rather a point of pride for people celebrating Easter in the traditional way. Example? Here’s an Easter egg tree from Saalfeld with more than 9,000 individual eggs! 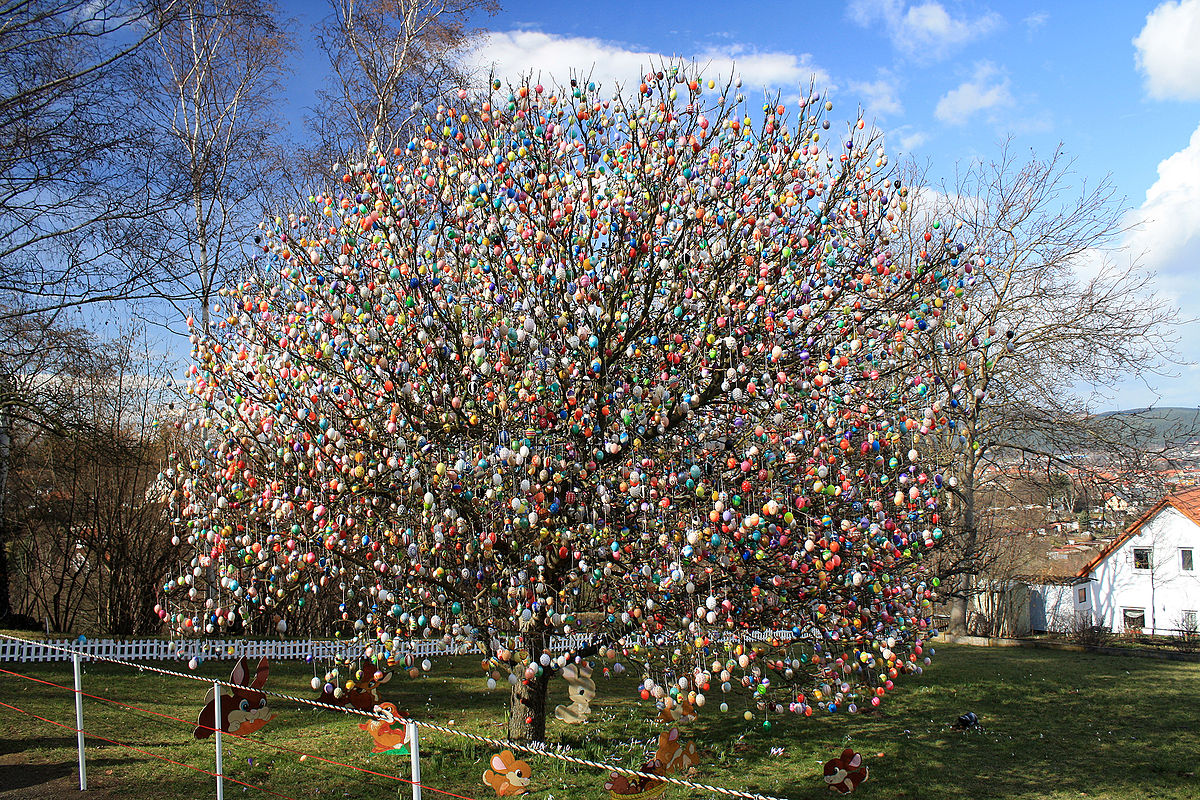 In the northern parts of the Netherlands a local Easter tradition is the Easter fire. Such fires are common throughout northern Europe and in northern Germany, too, and traditionally burn from Saturday evening through to Easter Sunday.

The fires have a long history and have even spread from the north of Europe through to the United States, too. Indeed, one of the most notable Easter fires is lit each year in Fredericksburg, Texas:

Blazing on the hills around Fredericksburg each Easter Eve, combined with a local pageant, these fires recall an old tale. In March 1847, when Comanches and whites signed a major peace treaty, the Indians lighted huge signal fires on these hills. To calm her children’s fears, one mother– recalling Easter fires in her native Germany– told them the smoke came from pots in which the Easter Bunny was dying eggs with flowers. As the tale spread and pioneers kindled the fires in each year of peace with the Indians, the local yearly celebration arose.

Easter fires are also common in Denmark, Norway, Sweden, and Finland where, though it might be officially spring, the cold can still bite at this time of the year.

Americans visiting Sweden this Easter might be caught checking their calendars to ensure they haven’t arrived in October. The reason? A Swedish tradition involves children moving door-to-door through villages and towns and receiving candy from the owners, much in the same style as Halloween back home.

It’s all part of a tradition known locally as ‘the Easter Witch’:

On the Thursday before Easter, young girls paint their faces, put on scarves and long skirts, then roam from house to house collecting candy. On the hillsides, people light bonfires to scare off the evil spirits, and the blasts of firecrackers can be heard as revelers simulate shooting witches from the sky. Intertwined with the supernatural festivities is the traditional Christian holiday. The Swedish symbol of Easter is a birch twig decorated with colored feathers, and as the holiday approaches these colorful charms fill the markets, along the ubiquitous candy Easter eggs.

While there are superficial parallels with Halloween, you’ll see no Batman, Superman, or superhero costumes in these celebrations. Instead, look out for traditionally dressed young girls using copper kettles to collect their candy treats.

Easter, of course, is a Christian tradition and China is not traditionally a Christian country. While there are relatively small numbers of observant Catholics and Orthodox Christians in mainland China (and more in Hong Kong) the majority of Chinese people are not Christian. Hence, celebrations of Easter adopt the mostly commercial aspects of the Western traditions while eschewing the religious parts.

What does this mean? Sales, sales, and more sales – and increasingly dining offers and chocolate!

Time Out in Shanghai has links to many different hotels and restaurants offering Easter feasts, with the Yi Café offer typical of what can be found:

The chefs at Yi Café has prepared an Easter Eggstravaganza Buffet featuring traditional carved roast beef and baked bone-in ham, an array of seafood specialties, mosaics of cheeses and a cornucopia of flavorful salads. Delicious pastas, local Shanghainese favorites and also decadent cakes and desserts. Word has it there will also be a visit from the Easter Bunny

In other words, there’s something for everyone: traditional Easter roast for expat Brits, pasta for Italians, local food for, well, locals, and the Easter Bunny for the kids. What more could you ask for?

As in other countries – including the US – Russians like their Easter eggs moving. Or more precisely, rolling.

As the Russland Journal explains:

It is still very popular to roll Easter eggs on the ground or down a hill. The aim of the game is to break the eggs of other players without damaging your own ones. Experienced players pay special attention to the form of the eggs and even make special gutters for the eggs to have a better roll. Farmers believe that rolling eggs keep the soil fertile.

For nearly 140 years the president has welcomed hundreds of children and thousands of guests to the White House south lawn on Easter Monday for a day of fun, including the Easter egg roll – and this year the rolling will be supplemented by the first White House fun run.

If you’ve had a little too much chocolate the day before, the fun run might be just the thing to get that diet back on track.

Wherever you are this Easter and however you celebrate, the team at DOZ wishes you a very Happy Easter and hopes that the Easter Bunny makes his way to your house this year.