Political Problems? Marketing to the Rescue!

In the United States there are two political parties with a real shot at winning the White House: the Republicans and the Democrats.

Sure, there are some minor parties that will make it onto the ballot in one or more states like the Green Party or the Libertarian Party. But not even these parties content that they have a real shot at governing. When it comes to putting someone into the Oval Office, it is going to come down to a choice between two parties.

In Australia, things aren’t quite as simple.

Elections are somewhat unpredictable – that’s a feature, not a big in a democracy – but at the macro level we can make a few predictions. The election campaign currently underway in Australia will see either a Liberal Prime Minister or a Labor Prime Minister in office the day after the vote. But the minor parties in Australia have long been able to win places in the national Senate, sometimes with only the weakest level of popular support.

And this is problem number one: parties that very few people support can still win a place in the parliament.

A quirk of Australia’s electoral system means that even very weak support can translate into one of the coveted and powerful seats in the Australian Senate. How weak?

Well in 2013 one person in the state off Victoria was elected with just 17,000 of the 3.5 million votes cast in that state. In other words, 99.5% of people did not vote for this person and yet – due to the way the Australian electoral system works – the person was elected to the national parliament.

This leads to problem number two: the relative ease of getting elected means dozens of parties throw their hats in the ring.

The chance to be elected even with minimal support encourages all sorts of groups to nominate their party for election. Australia has a Future Party, a Sports Party, a Wikileaks Party, and a Pirate Party, too. There is a Sex Party, a Motoring Enthusiast Party, a Smoker’s Rights Party, and a party that is simply called Bullet Train for Australia.

At the last election there were 49 different parties on Australian ballots – and this takes us to the third problem: the parties on the ballot can have some very similar (and hence confusing) names.

Australians heading to the ballot box will likely ponder questions like these:

Make no mistake: the minor parties know their names are likely to be confused with other more popular parties; indeed, they bank on wining votes from the confused or mislead voter to get them over the line.

In short, the quirks of the electoral system makes it easy for small parties to win a Senate seat, which in turn encourages many more parties to get on the ballot, and the confusing names of sometimes radically different parties made it hard for voters to determine exactly who they were voting for.

So the Australian government came up with a solution.

If the names of the parties are confusing why not help the voters by providing them with a logo instead?

After all, research has demonstrated that even Australian children too young to read can easily recognize the logos of brands like McDonald’s, Toyota, and Disney. It stands to reason that if even a child can remember what they are watching or where they are eating by glancing at a logo, adult voters should have an easier time voting for the right party if there’ a logo on the ballot paper to help them.

This year will be the first election that will have logos included on the ballot paper for all parties. While they are all a standard size and while they are all printed in black and white, they should help overcome the problems caused by too many parties with too many similar names.

The electoral quirks? Well, they’ll remain – but if the logos help cut the appeal of the minor parties then this problem might solve itself in future elections, anyway.

So: which logos work and which don’t?

One Australian newspaper, the Sydney Morning Herald, recently assessed some of the logos that will appear on ballot papers this election. The Herald’s design team joined expert marketers from local universities to determine which logos worked and which ones did not.

How close to the mark were their assessments? Read on.

The Herald Says: “Well, what does it mean? No clear visual message to the voter…None of the designers knew who this was or which party.”

DOZ Says: Agreed. A voter who doesn’t recognize this sitting Senator won’t have a clue what party this is.

The Herald Says: “It has the boldest image, but I don’t understand what it means… Most of the designers Fairfax Media spoke to loved this logo because it was eye-catching and used a lot of black, which would stand out on the ballot paper.”

DOZ Says: It’s a great logo and it won’t confuse the voter. The white text on the black background makes it easy to read on what is otherwise going to be a crowded ballot paper.

The Herald Says: “This logo gives an instant message of what the party is about and is dynamic…The illustration and typographic style doesn’t feel like a logo at all – more like clip art. The name of the party should be included rather than the speed of the train, according to Elizabeth Carruthers.”

DOZ Says: The image is striking and it is, indeed, dynamic. However, despite what the Herald might have you believe, that’s not a speed on the logo; it’s a distance. Perhaps it was meant to be indicative of the speed of a bullet train, but it’s no so thing in practice.

The Herald Says: “Anti Paedophile with a “Don’t” across it, does that mean they are against Anti Paedophiles?? …Visually, running text across that outline “no” circle does not work really great.”

DOZ Says: The Herald is spot on here: this is a terrible logo. The messaging is confused, the “Don’t” cross is poor, and the text is hard to read with the lines from the circle. Was this logo designed by Michael Scott? 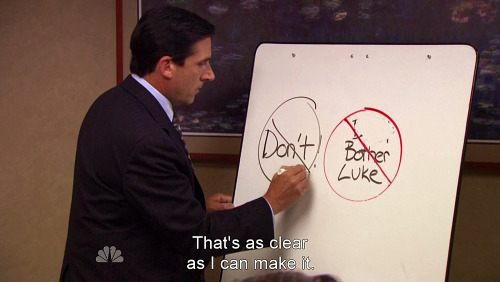 Check out the Herald article for more commentary and assessments of the logos.

Faced with a problem that threatened a national election, the Australian government and the Australian Electoral Commission needed a solution. There were too many parties competing for too few places in the parliament and with confusing names to boot.

The solution was found not in the political science classroom but in the marketing textbook.

In short, faced with a political problem Australia turned to a marketing solution. Will it work? The results will be in on the 2nd of July and we’ll know for sure.