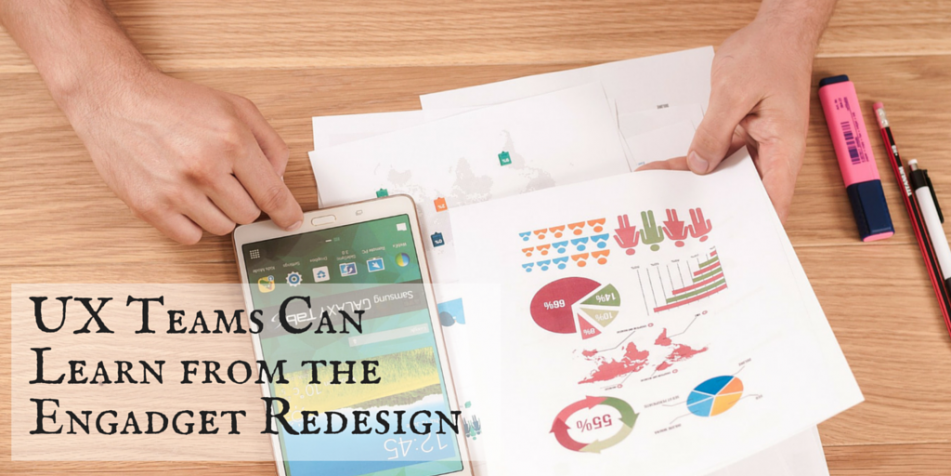 UX Teams Can Learn from the Engadget Redesign 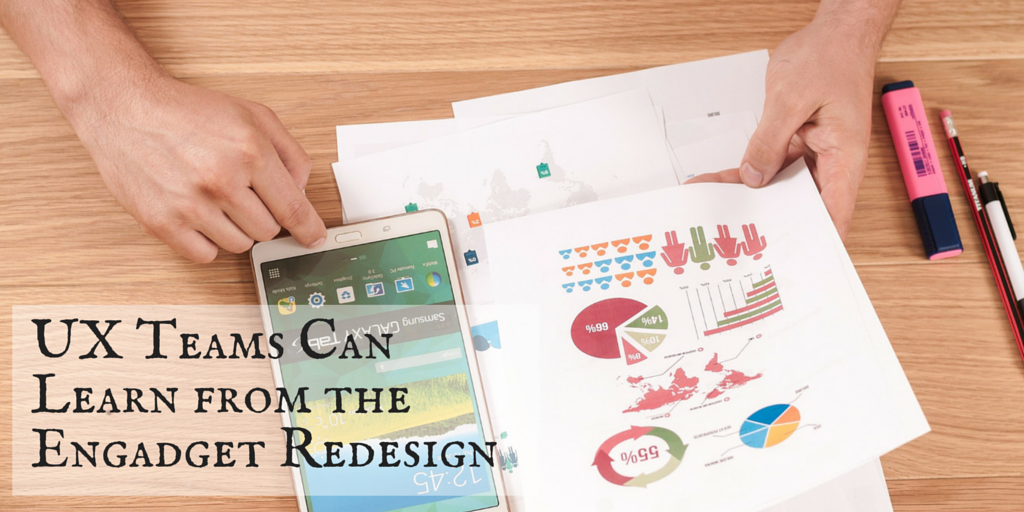 In early December long-standing tech site Engadget re-launched their site with a full facelift and an explanatory blog post from Editor-in-Chief Michael Gorman:

A year and a half ago, I told you that Engadget’s editorial mission was going to change. Since then, we’ve delivered on that promise, telling stories about how and why technology is affecting the world we live in. Our editorial evolution continued, but the site remained largely untouched. It’s time our visuals caught up with our vision. And unlike Darwin, we didn’t need any birds to show us the way.

Engadget, long a staple of the technology news sector and digital journalism more generally, saw its redesign discussed across the web and also in the mainstream media.

In the traditional media The Wall Street Journal lauded Engadget’s “face-lift” and “new outlook on life”, though noted this was just the latest such redesign of AOL-owned sites. Meanwhile online, Digiday remarked on Engadget’s redesign and also noted it was “embracing a new editorial mandate that goes beyond gadget reviews to highlight how technology plays into areas such as music, art, culture, politics and privacy issues”.

But while such reports got the corporate word out on the redesign, one thing that both the Journal and Digiday missed was the user response. It was instead a thread on reddit’s r/technology subreddit that was left to state what any visitor to the redesigned site could see for themselves:

Engadget has ripped out their old website and replaced it with a clickbait link dump. They’re calling it Engadget 5.0. Have a look at the comments section on that page to see over 500 people panning the new site.

Indeed, beneath Gorman’s post were a plethora of comments ranging from the (perhaps expected?) pile-on hatred of anything new on the internet through to more restrained – but no less critical – itemized take-downs of the new Engadget site.

And while it is impossible to summarize hundreds of comments into a single critique, there was one thread that held most of the critical commentary together: the user experience (or lack thereof) on the new site.

What is User Experience?

User experience, or UX, “includes the practical, experiential, affective, meaningful and valuable aspects of human–computer interaction and product ownership.” It’s about the way that the user interacts with the website or product, how the product or site makes them feel, and how easy and intuitive it is to work with.

An example of a product with a great user experience is the Apple iPad Air. Personally, I was initially apprehensive about spending so much money on something that didn’t even come with an instruction book; after all, I was planning on using the iPad Air daily and for all sorts of productivity tasks yet there wasn’t even a booklet in the box to tell me how to turn it on.

Of course, I shouldn’t have worried – and not because there is a full user guide on the Apple website.

The Apple iPad Air is so intuitive and the experience of the user is so central to the design of the product that I didn’t need a guide to figure out what did what. A button? I pressed it and found the home screen. Want the screen to move? Slide a finger to the left, right, up or down. If this button turns the volume up, then the one next door will turn it down.

For a mid-30s man it took only a few minutes to become comfortable with. And for my toddler son, it was even quicker – and if a user who is still in grade school can figure out your product and use it effectively, it’s a good indicator that your user experience is on track.

Be aware, though, that user experience doesn’t mean that your website or product needs to be pretty or have a knight of the realm employed to make the edges curve ‘just so’. The Drudge Report and Craigslist, for example, are two sites that would struggle to get funded from a design perspective were they pitched to a group of investors today, yet both offer a user experience that is incredibly strong. All the information a user wants is there on the front page, the action demanded of the user is simple to understand (click, click, click again) and neither site attempts to distract you with images or flashy graphics – or even any graphics at all.

User experience, then, is about designing with the emotions and desires of the audience as the first and overwhelming priority.

And it seems that this user-centric approach is exactly what Engadget forgot when it re-launched its site.

The reaction from Engadget readers when Michael Gorman posted about the redesign was overwhelmingly negative. And reading through the comments, it’s clear that the problem that most readers were identifying – even if not all could put their finger on the exact term – was the user experience.

Check these comments pulled from more than 500 reader responses:

While Gorman did specifically ask for feedback from readers about the redesign and must have expected that some of the responses would be negative, he could hardly have expected the overwhelming, near universal disparagement of the Engadget site.

At the time of writing this post it’s not yet clear whether Engadget will attempt to weather the storm and retain its new layout, tweak the new style to address the concerns of its users, or even revert to the old design – though this seems the least likely option among the three. Whatever the outcome, there are some important lessons to be learnt from Engadget for UX teams.

The first lesson that can be extracted by UX teams from the Engadget redesign is the need to keep users at the center of any redesign or re-launch. The Engadget team seems to have focused on the product (the journalism and reporting focus) and the revenue (design for ads and clicks) rather than the user, and this has only infuriated users who were regular visitors to the Engadget site. While ad rates and click-through in the short term might improve, in the longer term users get turned off by a design that is not centered on their needs.

The second lesson that can be extracted by UX teams from the Engadget redesign is the need to design outside of a vacuum. Yes, there is a need to keep some things secret and not to leak what can be a big draw for a site or product on launch day. Would Engadget have made the Wall Street Journal if the design was leaked months ago? No. But this is not to say that design should be completed in a bubble. If the only time you ask your users for feedback is after the design is finalized and launched, it is way too late. Get your feedback early and fold it in to the design process often.

The third lesson that can be extracted by UX teams from the Engadget redesign is to consider the impact of every decision from multiple perspectives, and then make sure the user perspective comes out on top. A good example of Engadget getting this wrong is with regards to the article extracts that their front page used to use. The short extracts helped readers determine whether the entire article was worth clicking on and reading further. Engadget removed the extracts leaving the user to make that decision based solely on a headline and image pairing. By removing the text the site can appear ‘cleaner’, but the useful information valued by the reader is now gone. This is case study-worthy bad UX.

Engadget’s redesign has been widely criticized by users even as it garnered mentions in some of the highest profile mainstream and digital press in the United States. The new site stands as an example to other UX teams of what not to do, and UX teams and designers generally can learn from the Engadget criticism when they come to launch, or re-launch, their own sites and products.

What do you think of the Engadget redesign? Have you made UX an important part of your business? Tell us about it in comments below or on Twitter!