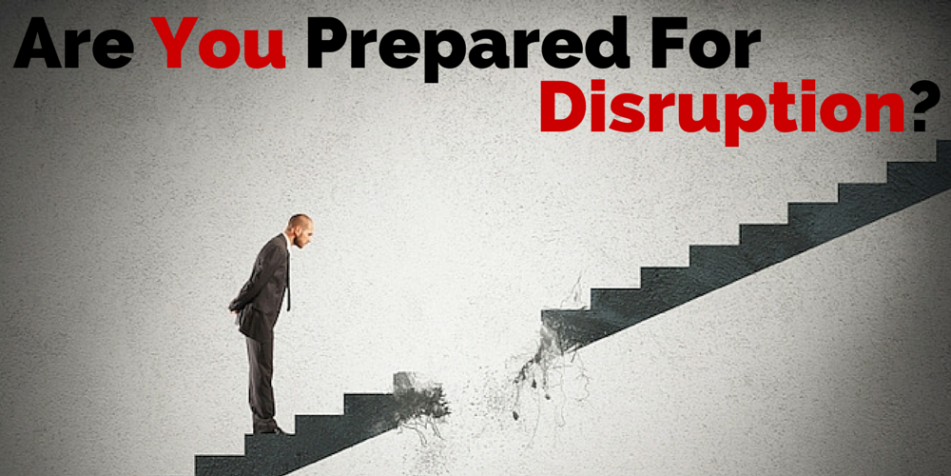 Why Your Industry Is About To Be Disrupted

In 2014 CNBC published their annual list of disruptors. You might imagine that the list would be heavy with technology startups and businesses with big dreams but low or even negative revenues and – to a certain extent – you’d be right. But a closer look at the list reveals not only tech companies looking to make their mark but a wave of disruption sweeping across almost every industry.

Take a closer look at the CNBC Disruptor 50’s top ten places to see this breadth of disruption in action:

Whether it is a company shooting for the stars – literally – or a company delivering music on-demand to consumers, disruptors are everywhere. And if they aren’t already disrupting your industry, they will be – and soon.

Let’s start by defining exactly what we are talking about when we use the word disruption.

Disruption is not about rapid growth, though disruptors can grow very rapidly. It’s also not about massive revenues, though revenues can and do flow to successful disruptors. Neither is disruption about being a tech company, having a high-tech product, or doing something that no one has ever done before. Disruptors might have or do one or more of these things, but they need not.

Instead disruption takes one of two distinct forms.

There is new-market disruption where a product or service addresses a market that couldn’t previously be served.

And there is low-end disruption where a company offers a simpler, cheaper, or more convenient alternative to an existing product.

SpaceX is an example of a new-market disruptor. Private space exploration was not an option in previous decades but, today, is more accessible than ever. The SpaceX company exists to serve this new market for space exploration.

Uber, on the other hand, is a low-end disruptor. It’s product is no cheaper than the alternative it seeks to displace, but it is more convenient and it is able to leverage that convenience in ways competitors cannot.

A Long History of Disruption

Disruption is not new.

And by ‘not new’ we don’t mean ‘people were disrupting back in the 1990s’. We mean this has been going on for hundreds of years. Indeed, as long as there has been capitalism, there has been disruption.

Carlota Pérez’s 2002 book Technological Revolutions and Financial Capital traced different eras of disruption, each of which was powered by a new ‘mania’ for an emerging technology. Starting back in the 18th century she traced five separate eras of disruption:

In the 1790s there was disruption from Canal Mania in England. A rapidly industrializing economy saw dozens, and then hundreds of new canals constructed to move goods cheaply and easily from manufacturers to consumers. Though there would be a ‘canal bubble’ of sorts and, indeed, a ‘canal crash’ that followed the bubble, the infrastructure that was developed during this period of disruption would fuel growth in the country for another hundred years.

In the 1840s the world found itself in the grip of Rail Mania. The railways that would be built in England, Europe, and the United States would redefine the industrial and social environment of those countries that invested – and, yes, over-invested – in rail transport options. Leisure time changed, new markets for rail travel emerged, and industries pivoted from moving goods by water to moving goods by rail. Disruption, again, left an infrastructure dividend for those that invested heavily.

In the 1880s the disruptive technology was steel. This new alloy would find a place in many industries including housing, manufacturing, agriculture, defense, transport, and shipping. The strong and relatively cheap metal would change the face of cities, counties, and continents, and the Steel Mania that gripped investors and governments alike led to massive investments in infrastructure that would reshape the ways that entire economies evolved.

In the 1920s new methods led to a disruption of the factory work. Henry Ford’s example and the mass production of consumer goods saw economies flourish, at least at the start of the decade. The crash that followed this Production Mania would see the US and the world plunged into Depression for years before finally emerging on the other side of the Great Depression a little wiser, and a lot better prepared for the decades of growth that would follow a decade of stagnation.

Finally, from the 1970s on, the world has found itself in a period of disruption driven by information technology and the internet. This Internet Mania has, like other periods of disruption before, had its bubbles, its periods of massive growth, and its infrastructure dividend for cities and countries alike. Unlike the other ‘manias’ however, this one is still affecting industries today and shows little evidence of slowing down just yet.

Disruption in today’s economy is driven by information technology and the internet, but it is about more than just leveraging new technologies. As the CNBC list of disruptors demonstrates, there is no industry that is not affected by technology and barely any that have not experienced disruption in some way, shape, or form thanks to the influence of technology.

The lesson is clear: if your industry has not yet been disrupted, don’t fret – it soon will be.

The Next Disrupted Industry Is…

Experts differ when it comes to predicting the next industry to face disruption. In response to a Quora question on just this topic answers included:

In short, if you can imagine it then you can disrupt it. Whether new-market or low-end, the disruption is coming, it’ll be driven by technology, and it’s on it’s way today.

Will you be ready?