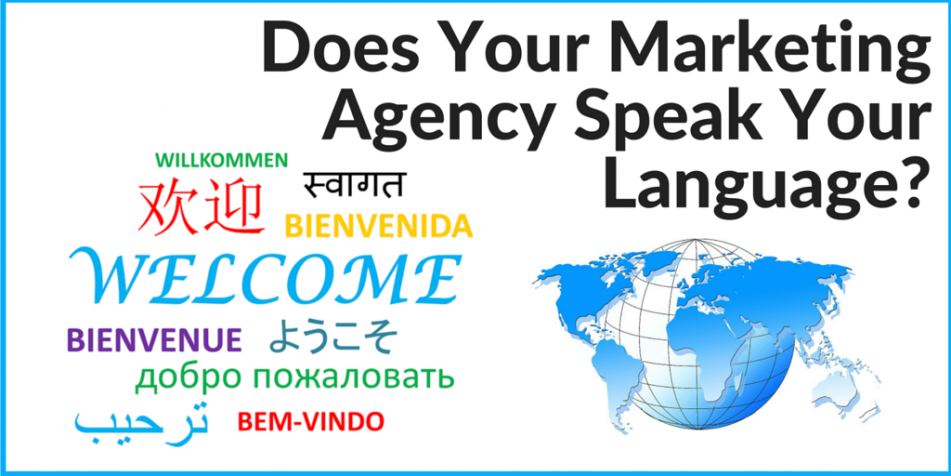 Does Your Marketing Agency Speak Your Language? 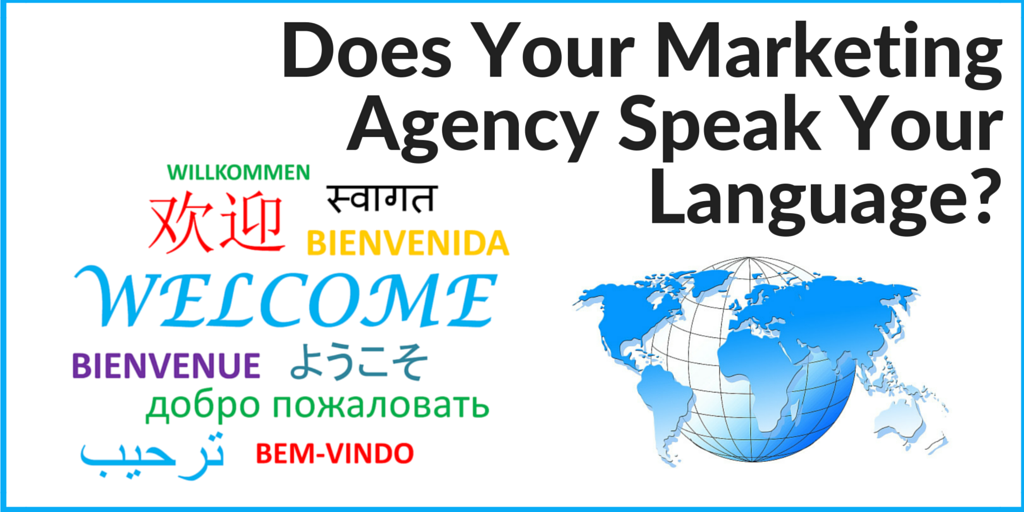 First there was globalization, the interconnections of commerce, culture, and finance that underpin the modern world. And just behind there was global marketing: the efforts to sell anything and everything to the consumers and companies that live and thrive in this globalized world.

Today marketing is a truly global activity with freelancers in France delivering social media in Sydney, and consultants in Chicago working on digital projects in Denver, Dubai, and Denmark.

The skills in the toolbox of the modern marketer are applicable in markets and across industries worldwide.

The SEO strategies that work on Google in Georgia also work for Google in Vancouver, London, Mumbai, and Singapore.

Even a momentary glance at the media, advertising, and marketing awards presented this year in Cannes indicate that good marketing works across cultures with winners drawn from almost a dozen different countries in the Branded Content category alone.

Yet there are some elements of marketing that have trouble translating across borders. We’ve written before about the issue of culture when it comes to communicating a marketing message internationally, but there is something even more basic than culture that can make it hard – if not impossible – to market effectively outside of a company’s home country.

Marketing in a Foreign Language is Hard

When taking a marketing message to another country there’s a fairly strong chance that the marketing team will have to start communicating in another language.

Sure, you could be lucky and be translating your campaign from Australia to New Zealand or from Germany to Austria, but in many or even most cases moving just one country over on the map means adjusting to a new language.

(And don’t forget: even if the language next door is officially the same, this doesn’t always mean your message will translate perfectly. Example? Ask an Australian and an American what thongs are and you’ll get tow entirely different answers…)

There are plenty of examples where marketers have been lazy and run their slogan through the equivalent of Google Translate to determine exactly how they’ll sell their product or service in a new country. We laugh at these and even cringe, promising ourselves that this would never happen in our company – yet time and again these sorts of errors are made as firms succumb to their lack of language skills.

So What Languages Should Your Marketing Agency Speak?

If you are taking your brand global then your marketing agency is going to have to be able to keep up.

They’ll need the staff, the resources, the creativity, and the professionalism to deliver for you.

But they’ll also need the language skills to keep up in a global world.

At a minimum they’ll need to speak English – after all, you speak English and you’ll want to be comfortable communicating your demands, goals, and expectations to them.

But what other languages will help you reach the world’s biggest consumer audiences?

Let’s dive into the data.

First, consider which languages have the most native speakers. The global top 5 reads like this:

So should you focus on firms that can deliver services in Mandarin, Hindi, and Arabic? Not necessarily. Things are a little more complicated than that.

Alongside this list we can look at what languages have the highest total number of speakers, both native and second language users:

But now consider which of these languages are truly global; that is, how many are official languages in more than a handful of closely related countries?

Mandarin, for example, is an official language in just three countries: China, Taiwan, and Singapore. It might be the most widely spoken language in the world, but unless you are marketing in those countries its unlikely you’ll need marketers with a good working knowledge of Mandarin.

English, on the other hand, is the official or de facto official language of 60 countries worldwide – everywhere from North America to Africa to Asia to Australia and Europe, too.

Arabic might be associated with the Middle East, but is well-understood and spoken widely in Africa, too.

Spanish has its home in Europe, but it is hard to market successfully in South and Central America without a knowledge of the tongue. If you’re interested to learn how to speak Spanish, try this curso de español.

Hindi, Bengali, and Urdu are like Mandarin: regionally focused and important only for marketing to the large groups of native speakers who have this language and no other in their arsenal.

French, on the other hand, will give you access to markets in Europe, North Africa, parts of the Middle East, the Pacific, the Caribbean, and not forgetting Canada, too.

So with all of this in mind, what languages should your marketing agency be confident marketing in?

On top of the advice previously given to choose an agency that speaks English, what else should guide your decision when it comes to the language skills of your marketing agency. Here are three guidelines to keep in mind:

Don’t go by the books

So an official language of the country is French – does this mean you should market in French? Unfortunately, no. The official language of a country is a good guide to how you might communicate with the government or with a certain sector of the population, but it doesn’t always mean all the locals speak it well. Consider Switzerland, for example, where you’ll need at least three different languages (French, Italian, and Swiss German) to communicate with the country, and perhaps a fourth, too, if you want to target rural areas, too. A French campaign in the landlocked Alpine country will have very little cut-through despite the language’s official status.

So your agency says they speak German and Spanish and are ready to take your campaigns to some of the biggest markets in Europe? Great – now test them. Unfortunately, what one person considers a ‘fluent’ level of language knowledge might only appear to be ‘conversational’ to a consumer, or even worse. Test your agency with a small task, have an expert look over their work, and make the agency earn your confidence and trust before putting them in charge of your brand in a new market. Don’t accept an agency on their word alone – look for the proof that should be in their linguistic pudding, so to speak.

Marketing is a global game and making sure your marketers are up to the job of hitting your targets in a linguistically diverse world is essential. Like SEO skills and the ability to produce fantastic copy on demand, the ability to deliver marketing in the languages your customers speak is an important part of any agencies professional arsenal.

When choosing your agency for an international campaign, then, you need to take care to do your customer research first, avoid being misled by official documents or superficial impressions of the country, and test your agency with smaller tasks until you are sure they can deliver.