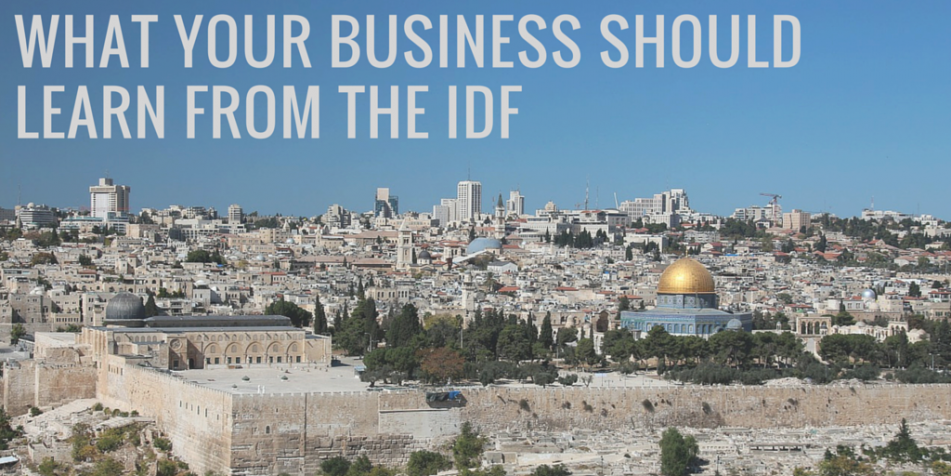 What Your Business Should Learn from the IDF 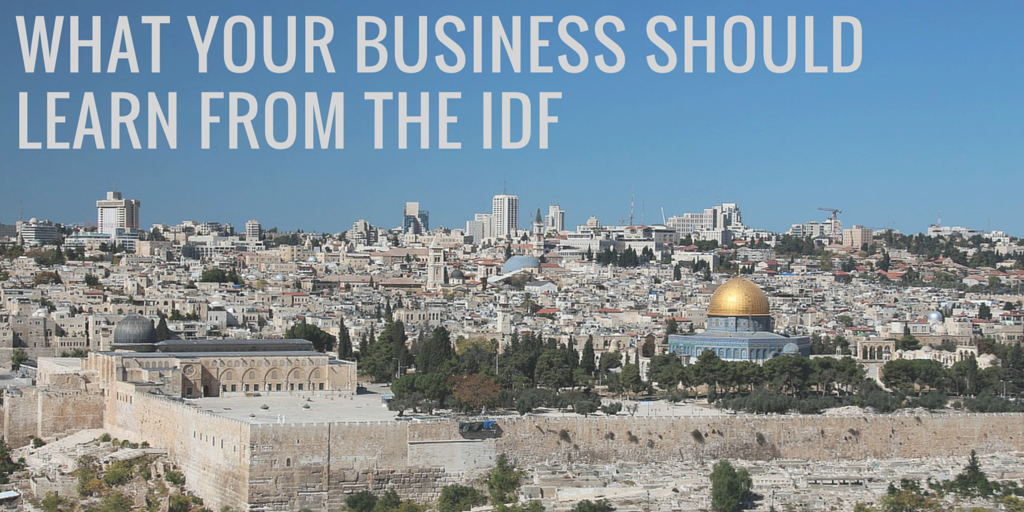 In the business world we often use words and phrases that suggest conflict.

We talk about being “at war” with our competitors, we talk about “taking a hit” when a product underperforms, and we use terms like “walking wounded” and “target rich environment” to discuss the market and those who compete in it.

The war analogy might sometimes seem appropriate but no matter how aligned the fight for customers seems with a fight to survive, it’s also clear that business world is not really a fight for survival to the death. At the worst you might lose your job, your income, and your business; you won’t lose your life.

Yet this doesn’t mean that an inexact analogy should prevent us from taking a look at what might be learnt from people whose job it is to keep their country safe. Indeed, there are lessons to be learnt from armed forces worldwide that can be applied in business as easy as they might on the battlefield.

For example, if your business has ever had to absorb another enterprise or if you are trying to integrate diverse team members into a single group you could do a lot worse that take some lessons from the French Foreign Legion. The Legion has been recruiting, training, and deploying non-French soldiers for more than 150 years, transforming them in the process from a group with no common language, heritage, or nationality into a single and feared fighting force.

Or consider the logistics lessons that the US Army can teach businesses. When you have to deploy tens of thousands of soldiers on the other side of the world, support them with fuel, food, armor, and everything from a post office to Wi-Fi internet, you learn how essential a strong logistics game is. The business world takes note of their success and industry experts pointing to risk-management and predicative supply efforts as two of many points where the business world can learn from the military mind.

But maybe your team is already well integrated and your supply chain is smooth and strong. Is there still something you can learn from the military? In this post I’ll argue yes, and point to one armed force that has developed a process for assessing military intelligence that any business can apply to its benefit.

Here’s what your business can learn from the Israeli Defense Force.

The IDF and AMAN

The Israeli Defense Force (IDF) was created in 1948 with the foundation of the state of Israel. Just two years later the Directorate of Military Intelligence (known by the acronym AMAN) was established and charged with the role of gathering and analyzing intelligence for the IDF. It is one of the three primary intelligence agencies in Israel alongside the higher profile Mossad, and the Shin Bet.

AMAN is officially part of the IDF but it does not fall under the command of either the Israeli army, air force, navy, or any other element in the armed forces. It serves all branches of the military and is independent of each, too. It is the largest of the Israeli intelligence agencies and employs some 7000 uniformed and non-uniform personnel.

AMAN gathers information and intelligence through a variety of means. Some of the intelligence gathered comes from human sources (known as HUMINT) and other information is gathered through surveillance (known as SIGINT). AMAN also interacts with foreign intelligence services and trades intelligence with allies in its mission to support and protect the country from its enemies foreign and domestic.

Yet there is something that AMAN does that can – and should – be applied in almost any business.

When you have a group of intelligence professionals analyzing information it shouldn’t be surprising that these professionals come to similar conclusion. After all, they come from the same background, have the same goals, and are trying to reach the same ends.

However, as anyone involved in a situation where agreement quickly transforms into groupthink, this can be dangerous. And when the security of the nation is in the balance, this can mean a lot more danger than a poor business decision or a not-so-good line call.

The AMAN, then, recognizing this, instituted what the Brookings Institution called The Devil’s Advocate.

in order to make sure that different and opposing opinions are heard within the Israeli intelligence community, AMAN has a culture of openness, where individuals are expected to voice dissenting opinions. The organizational slogan that reflects this openness is, “Freedom of opinion, discipline in action.”

Delivering on this goal, AMAN embeds in their culture the notion of arguing against colleagues and taking on the position of ‘the devil’s advocate’; that is, arguing for the opposite conclusion to the rest of the team. Brookings continues:

The devil’s advocate of office ensures that AMAN’s intelligence assessments are creative and do not fall prey to group think. The office regularly criticizes products coming from the analysis and production divisions, and writes opinion papers that counter these departments’ assessments.

The staff in the devil’s advocate office is made up of extremely experienced and talented officers who are known to have a creative, “outside the box” way of thinking. Perhaps as important, they are highly regarded by the analysts. As such, strong consideration is given to their conclusions and their memos go directly to the office of the Director of Military Intelligence, as well as to all major decision makers.

The devil’s advocate office also proactively combats group think and conventional wisdom by writing papers that examine the possibility of a radical and negative change occurring within the security environment. This is done even when the defense establishment does not think that such a development is likely, precisely to explore alternative assumptions and worst-case scenarios.

In short, intelligence officers look for the things that could or even only might go wrong, assess things in the most pessimistic light, and ensure that every option has been explored instead of simply being dismissed as ‘unlikely’ or ‘not probable’.

The Devil’s Advocate in Your Business

So how can your business learn from AMAN? And how can their ‘devil’s advocate’ approach to intelligence analysis be applied in your business? What’s more, should it?

The answers are clear.

Applying a devil’s advocate approach to analysis and decision making in your business is a great idea when you want to make better decisions and fully think through the implications of your decisions. Instituting a devil’s advocate approach in your business means that your team members can think out loud without feeling like they are departing from the company line, and criticize a decision by pointing to potential pitfalls without felling like they are undermining the boss.

It also gives you a chance to convince your team that the decision you’ve made is the best possible decision. Why? Because when the devil’s advocate arguments are made, explored, analyzed, and eventually rejected, what’s left is the decision that everyone is happy with. The team is better informed and can get behind a choice that is entirely thought through.

Of course, there’s also the possibility that the devil’s advocate will signal a hole in the favored decision. A problem? Far from it. This provides the opportunity to reassess the original decision and reinforce it in the light of new and perhaps originally dismissed information. Everyone wins.

The military can teach business a lot, be it diversity, logistics, or – in the case of AMAN and the IDF – how to make better decisions. By instituting a devil’s advocate system to your business’s decision making process, it’s possible to make the best possible decisions for your business while considering the broadest possible range of options. You might not be fighting for the future of your country, but you’ll be acting in the same responsible and strategic manner that militaries around the world do with every ‘life on the line’ decision they make.