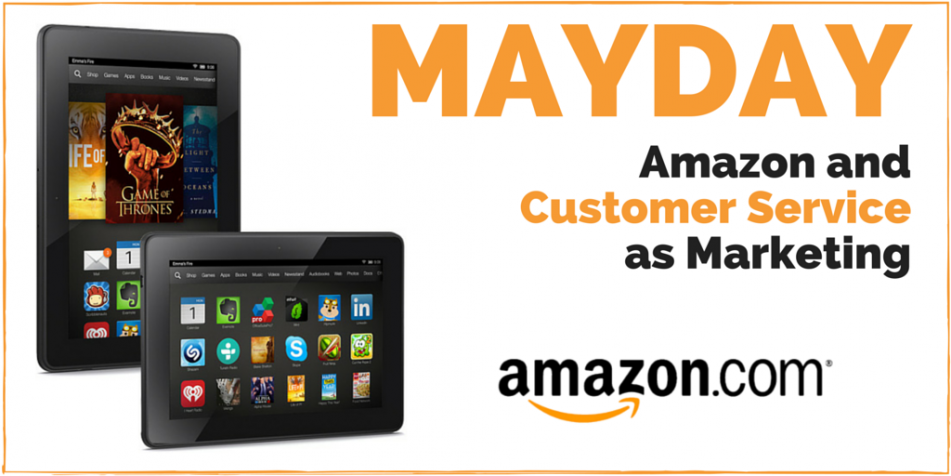 It’s May 1st – May Day, as it is know in much of the world – but this post isn’t about welcoming spring, dancing around poles, or taking to the street to demand worker’s rights. It’s also not about that famed distress call, mayday mayday mayday, or any of the books, songs, films, or TV specials that bear the name.

It’s about another Mayday – Amazon’s Mayday – and how it just might be the best marketing move the company ever made.

The launch of the Amazon Kindle, the company’s market leading e-ink tablet, in 2007 was truly revolutionary. While other ereaders had entered the market, none were back by the bookselling behemoth, retail know-how, or could connect as effortlessly to the dominant Amazon book ecosystem as the Kindle.

The e-ink display made reading on a screen closer to the experience of reading a physical book than any competing product. By the end of 2013 more than 40 million Kindle’s had been sold, evidence of a phenomenal change in the consumption of books in the United States and around the world.

Yet while the Kindle was an amazing reading experience, its e-ink display was not suited to presenting non-text websites. While text heavy sites like Wikipedia were not painful to read or review, much of the web remained poorly rendered or inaccessible from a Kindle. In addition, while the ebook purchasing experience was efficient and even enjoyable, Amazon’s expanding library of streaming media, video and audio, and applications segment was impossible to consume on the Kindle. For a company with millions of customers happy to be locked in to the Amazon ecosystem because of the ease and speed of the company’s ebook delivery, this was a problem in search of an elegant solution.

In September 2011 Amazon launched a tablet computer it called the Kindle Fire. Designed to be a better than average reader and a competitive media consumption device, the Kindle Fire boasted the color screen and processing power that the Kindle ereader lacked, and opened the door to the entire Amazon shopping experience. Video, audio, books, shopping, applications, and surfing the web – everything you could do on a competing tablet you could do on the Amazon Kindle Fire.

Fire to HD to HDX

The original Kindle Fire was well received but faced some difficulties conquering a market dominated by Apple’s iPad and it’s own App Store ecosystem. While the Fire would quickly assert itself as superior to all other Android-based tablets – indeed, only Apple has sold more tablets than Amazon – it also needed to keep up with a rapidly evolving market and consumer expectations.

The Kindle Fire beget the Kindle Fire HD with, obviously, HD resolution, a faster processor, and specifications that outpaced almost every other Android tablet on release. Amazon’s own application store hummed along and the as streaming media and second-screening meant that tablets were quickly becoming ubiquitous in American households, the sales of the Kindle Fire and Kindle Fire HD continued to tick over smoothly.

The ‘up-specing’ of the Fire range continued with the introduction of the Fire HDX (Amazon dropped the ‘Kindle’ moniker for the Fire range of tablets to differentiate them from the ereader devices) in late 2013. Available in two sizes and equipped with a HD screen, fast processor, and new UX features, the HDX was well received and received good reviews on release. However, it was one feature of the Fire HDX that had people talking more than any other: Mayday.

Mayday was technical support re-thought for the on-demand economy. In a world where the press of a button will have a car headed to your location to pick you up, where pizza, cookies and flowers can be ordered 24/7, and where delivery by drone (another Amazon innovation) is coming soon, Mayday was the technical support that people didn’t know they wanted but soon couldn’t live without. In a nutshell, Mayday allowed a user of the Fire HDX to click an icon and, in 15 seconds of less, be connected to a real, live human being who can answer questions, share a screen, and solve problems in person.

Here’s Mashable checking out the feature:

Mayday was tech support for the on-demand economy. And it might also be Amazon’s best marketing move, yet.

When products are difficult to differentiate technologically or even practically, the one area where a business can differentiate itself is in its customer service. Perhaps they can offer an extended warranty to give customers some piece of mind before purchase. Perhaps they can try some live chat, or create a public forum where users can crowdsource help from each other. Making it easy to return a faulty product and dealing with customer complaints promptly whether they arrive by mail, phone, email, tweet or text is also going to show a commitment to the customer.

But what Jeff Bezos and Amazon have done with Mayday is take customer service to the next level altogether.

Mayday is an example of customer service delivered when it is convenient for the customer. No delays, save for the 15 seconds it takes to connect to a real face, and available on-demand, anytime. Customers aren’t left trying to figure out if a company’s business hours refer to the east coast, west coast, or stuck with issues when they are traveling on the other side of the world. Amazon delivers the support any time and, as long as a customer’s billing address is in the US, from anywhere in the world.

More than customer service, this is marketing. Amazon realizes that this differentiation with regards to service. Apple might have a strong following and their OS and App Store might still be a cleaner experience than Amazon’s Fire OS and more limited store, but Apple doesn’t come close with regards to service. Customer service is a marketing angle that Amazon, at least for the moment, owns in the tablet market.

And if they roll it out to other devices in the Amazon stable, it might just prove to be Amazon’s best marketing move yet.