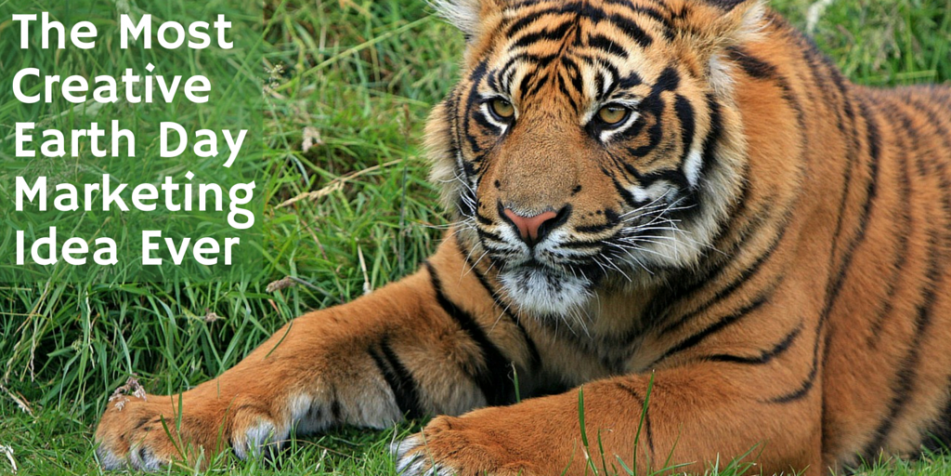 The Most Creative Earth Day Marketing Idea Ever 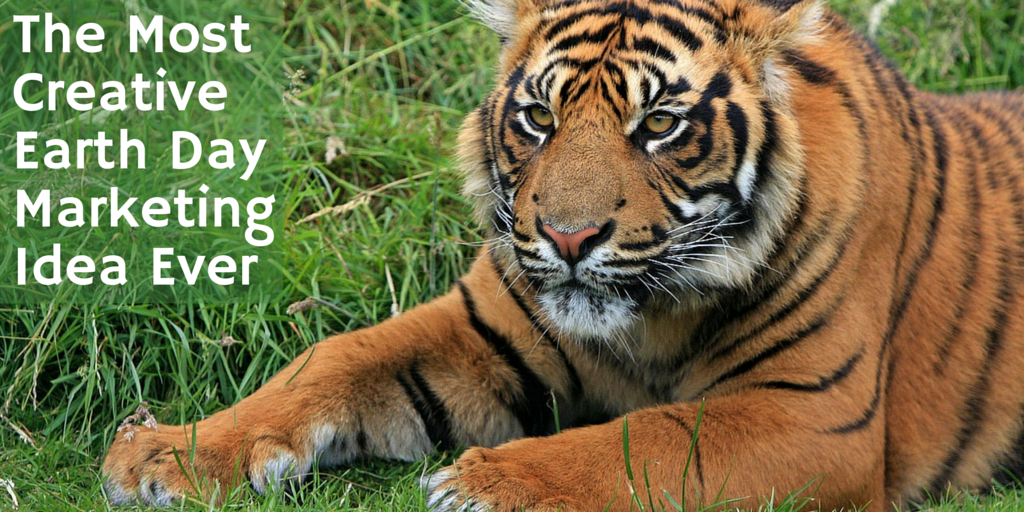 All this week on The DOZ Blog we’re taking a look at marketing around Earth Day. Yesterday we brought you ten facts about Earth Day that are important to keep in mind as you build your Earth Day strategy and today we’re holding up an example of what is the most creative Earth Day marketing event idea ever.

Drawing attention to environmental issues is something that businesses and brands can engage in every Earth Day. Being involved can be as simple as washing out the company logo with green for a day or a week, or it can be a little more involved and engage the audience with competitions, giveaways, and branded content. Sometimes brands take it bigger with billboard marketing, TV advertising, and web mini-sites designed to raise awareness of environmental issues while nudging the visitor towards the brand backing the promotion.

While such efforts can be effective and have been proven well-received both online and offline, they are also the safe choices. And, while safe can be good, its not always headline-grabbing marketing as it lacks the creativity that people expect from truly original event marketing.

Getting Creative vs. Playing it Safe

Of course, getting creative in your marketing can be a double-edged sword.

If your original idea hits the mark, gets the coverage you’re hoping for, and goes viral on social media then it’s simply amazing. Watching the Google Analytics live feed as your site explodes is something that every marketer hopes to be able to do – and trust me: it’s so good when it happens to you.

But when your totally original and oh-so-creative idea misses the mark, when it doesn’t quite find its audience, or, worst of all, when the joke that was oh-so-funny in the office falls oh-so-flat in public it can sometimes leave the marketing team wondering why they didn’t just keep things simple, boring, and workable rather than try and be special.

There are costs, then, to playing it safe just as there are to going for the big, creative win, and if you’re taking the latter route you better be sure to nail it. What does this mean in the context of event marketing around Earth Day?

It means something like the 2014 Smithsonian Earth Day campaign known as Endangered Song.

For Earth Day in 2014 the Smithsonian National Zoological Park and Conservation Biology Institute sought to take the creative route. They identified a goal, thought deeply about how to engage the public in reaching this goal, and rethought the way that technology and social media could be brought to bear to support this engagement.

First, the Smithsonian chose a clear focus point for the Earth Day campaign: the endangered Sumatran Tiger. This tiger was critically endangered with only 400 individual tigers still living anywhere on the planet. Despite its critically endangered status, the tiger is well-known in popular culture and enjoys recognition in the general public in way that a less-well-known, less-cuddly, and less-storybook friendly anima might.

Second, with the tiger selected as the focus point of the campaign, the Smithsonian was tasked with communicating its endangered status to the public. The difficulty here is communicating just how few tigers are left in a world where anything measured in three figures is still usually significant. The Smithsonian settled on releasing a vinyl album in a limited edition – 400 copies, of course – and distributing them to supporters of the project and the band that recorded the song on the album. Unlike an endangered species, most everyone understands the concept of a limited edition.

But how does a limited edition of a song simulate an endangered species that is dying out? Wouldn’t the owner of the limited edition album simply keep the album to themselves and enjoy the music? The answer to the latter question is ‘yes’, and so the Smithsonian took a step to ensure that the song was not simply something that the individual lucky enough to secure the album could enjoy in their home.

Just like the Sumatran Tiger if nothing was done to prolong its existence. 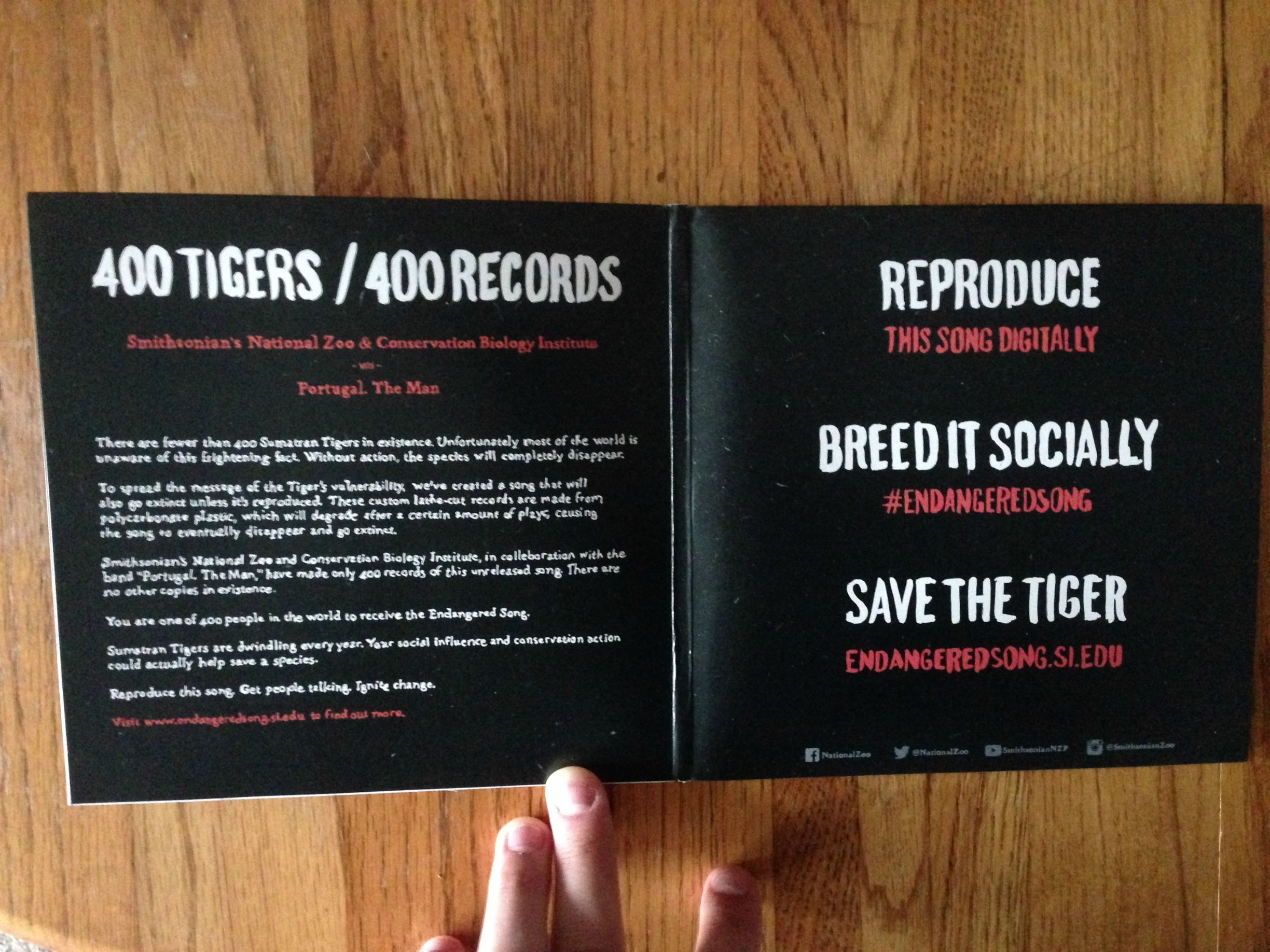 The fourth step in the strategy, then, was to encourage the sharing of the song on the album. The 400 people who received copies of the album were also provided with instructions on how to digitize the music, to share the music, and to promote the song on social media. As the Smithsonian explained:

If you’re one of the 400 who received the Endangered Song, take a look at our video on how to digitize it and reproduce the song…Help us reproduce the song and build awareness for the critically endangered Sumatran tiger by sharing on your social channels using #EndangeredSong.

The fifth step in the strategy is implied in the extract above: social media. The individuals who shared the song were directed to YouTube, to Soundcloud, to reddit, and to other social bookmarking sites to share their digital copy. The common hashtag made finding the song easy for those who didn’t get a physical copy of the song, and it also enabled the Smithsonian to track and analyze where potential supporters of their Sumatran Tiger conservation project were spending their time.

It was smart, it was creative, and it was social – but would it work?

The Smithsonian described their project as “a song manufactured to go extinct unless it’s reproduced”. Success would be realized if the song grew from its initial 400 copies and reached an audience through the magic of social sharing.

And shared it was.

Here are the figures from only the top four YouTube uploads alone:

Add to this plays on Soundcloud, shares on Twitter and Facebook, sharing on reddit (including an AMA with the band behind the song on the r/music subreddit) and the 400 copies of the song quickly reached first hundreds of thousands and then millions of people.

What’s more, the Smithsonian also won considerable exposure in the mainstream media (for example, The Washington Post) for its efforts with everyone from the nightly news to specialized music publications (Rolling Stone) and industry publications (Ad Week) covering the Earth Day marketing coup.

Not every creative effort results in the sort of social and mainstream media win that the Smithsonian managed with their Endangered Song project. But when the creativity is brought to bear in a strategic way, when the project manages to engage and encourage virility, and when there is close alignment between the message and the marketing channels, it can pay off in a big way.