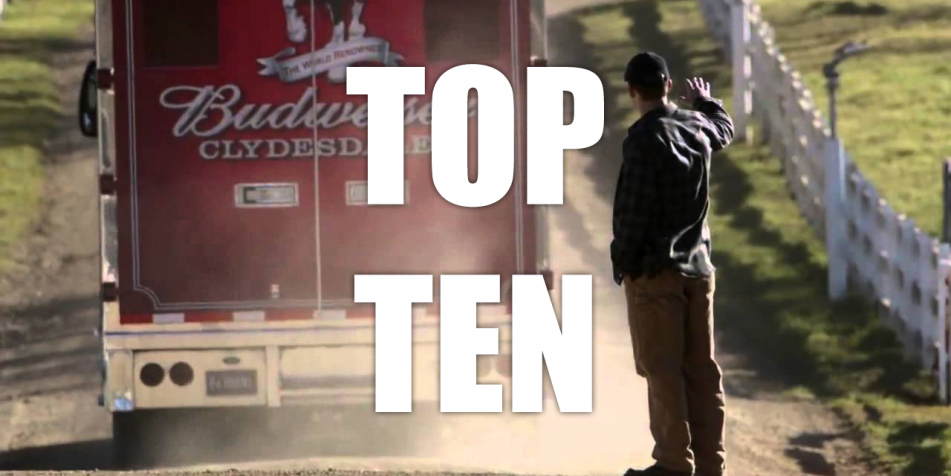 In the last couple of days we’ve looked at how freelancers have used the Super Bowl to launch themselves into the marketing stratosphere, we’ve identified how ambush marketers can use major sporting events like the Super Bowl to fame (or infamy) for their brands, and we’ve checked out the ROI for a Super Bowl spot (TL;DR not always so good).

Today we’re taking a look a final look at the commercials themselves. With 30 second spots costing a cool $4.5 million this year a Super Bowl commercial is a serious undertaking for any business and hundreds of hours are spent ensuring that the Sunday afternoon pitch is perfect.

But what makes a perfect Super Bowl commercial anyway?

Entertaining? Yes. Funny? It can help. A little nostalgia or patriotism doesn’t go astray, and celebrity faces can go a long way to keeping those viewer eyeballs glued to the screen.

Cultural references need to be broad in order to reach as many of the 130 millions viewers as possible, so the Muppets and Star Wars are good while the characters from that under-appreciated HBO series are not.

Kids and animals can tug at the heart-strings while ‘fish out of water’ tales can make the audience laugh out loud.

Here’s the DOZ Top 10 Super Bowl commercials of all time.

What sort of startup would we be if this effort didn’t make our cut?

Apple’s famous effort invited viewers to make the switch to their Macintosh, setting aside the IBM compatible, Windows-based machines that then – and still now – dominated the market. It set the scene for decades of Apple marketing as the choice of the non-conformist, the trendsetter, and the bucker of trends.

This ad had it all.

An instantly recognisable theme, a kid toying with ‘the Force’, a father messing with his mind, and a perfect shot of the product. A classic for sure.

Monster – When I Grow Up

Again with the kids – but oh, so effective. In 30 seconds every adult is transported back to their childhood where they dreamed of being a doctor, a leader, a scientist, or an astronaut. Didn’t make it to the moon yet? Don’t worry – Monster.com will help you find the job of your dreams. Perfectly executed.

The Budweiser Clydesdales make regular appearances in the company’s Super Bowl ads, but rarely do they bring a tear to the eyes of viewers like this effort. The combination of the soft, subtle music, the globally understood relationship between a trainer and his horse, and the touching hug at the finish make this a wonderful piece of minute-long filmmaking.

Detroit had fallen on hard days when Chrysler presented this ad at the Super Bowl. A city falling apart, crumbling in economic decline, disheveled, dirty, and broke. Detroit was seemingly another world compared to the rest of the United States, but Chrysler teamed up with hip-hop superstar and Detroit-local Eminem and delivered an ad to put them back on the map.

A second Chrysler ad on our list but deservedly so. It’s a silent, photo-filled taste of an American lifestyle that few in the cities will ever know. The farmers, the men and women who go out and grow the food that sustains an entire nation, are celebrated here and Chrysler rightly received accolades for their effort that broke with tradition and delivered straight to the heart.

Old Spice – The Man Your Man Could Smell Like

Fun, direct, and self-satirizing. The Old Spice effort immediately became a classic and parodies abounded in the weeks following the Super Bowl. Appealing to men and women alike, this ad put the P&G brand front and center in the minds of shoppers, and follow up efforts and engagement with customers cemented the brand and its pitchman in the American psyche.

Slapstick humour is always good for a Super Bowl ad and – if you can work in a football reference – so much more the better. The manager praising Terry Tate’s positive influence on the office interspersed with co-workers being pummelled by the player make for an ad you cannot help but smile at – and a firm reminder to check you put the cover sheet on your TPS report come Monday.

Selling beer or corn chips to a Super Bowl audience is one thing. But how about selling a mortgage? Ameriquest’s effort was spot on for humor, and almost anyone can imagine themselves falling victim to the same turn of events. The tagline – ‘Don’t Judge Too Quickly. We Won’t’ – is perfectly presented and reinforces the values of the brand.

Google is a strange Super Bowl advertiser. Think about it: they dominate the market, give their premium product (search) away for free to consumers, and awareness of their brand is so high it has become a verb itself. Need to advertise? No. Deliver a perfect, tearjerker of an advertisement anyway? Yes.

Did we miss your favourite ad? Let us know in comments below, on Facebook, or on Twitter.