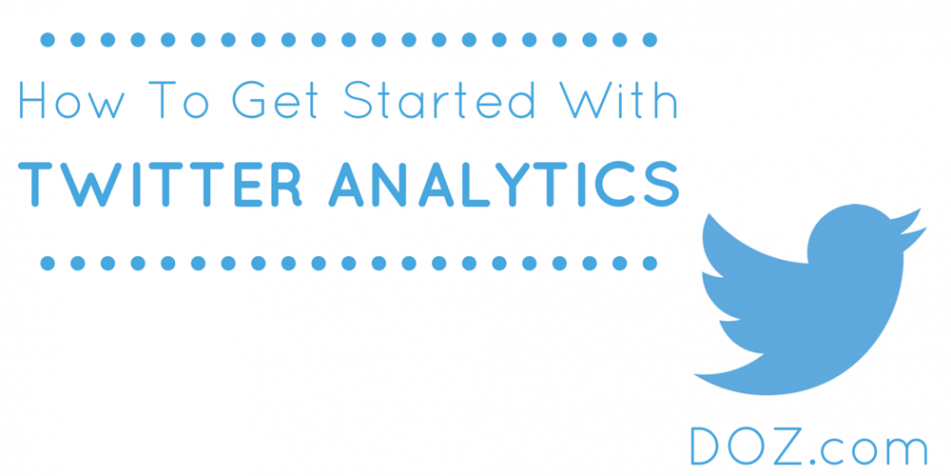 Almost everyone has heard of Twitter. The network’s hashtag is ubiquitous, appearing everywhere from online advertising to the breaking news bar of the television evening news. More than 280 million active users log in daily – usually many times every day – and share content, emotions, exasperations, and cat photos with their followers.

Many people use Twitter just for fun. Ask them about numbers they associate with the network and they might tell you how many retweets they earned the day before, or how many people favorited their epic tweet last week.

But if you are taking Twitter a little more seriously, the platform offers some great data tracking and analytical tools. You don’t have to be a power user or a big business to dig deeper into your tweet stream or follower list. Anyone with a Twitter account can click over to Twitter Analytics and get a quick and compelling snapshot of their tweets and the sorts of people who enjoy to read them.

Here are five ways you can get started analyzing your data with Twitter Analytics today.

If you check your profile you’ll see two numbers under your Twitter handle: the number of tweets you’ve sent and the number of followers you have. These numbers are useful, but they don’t tell you much about the reach that you have when you send 140 characters out into the ether.

In the screenshot above you can see that my tweets earned more than 25,000 impressions in February – and this despite having only around 100 followers. By writing good tweet and earning retweets and favorites from others, I was able to reach 250 times more people than I could via my follower list alone.

The next thing to check is the level of engagement that your tweets have. Twitter records an engagement when someone who sees your tweet retweets it, adds it as a favorite, replies to the tweet, or clicks on a link contained in the tweet. Hence, if you manage to get a lot of eyeballs on the tweet but few people click on the link inside that tweet, you can have a high number of impressions but low levels of engagement.

Impressions are nice to have but engagement is better. Hence, the tweet above and it’s 1.9% engagement rate is probably better than this tweet with nine times the impressions but less than half the engagement:

In the end you’ll want your impression and engagement numbers to be as high as you can get them – and if you couple this with a growing follower count you’ll be on your way to Twitter stardom.

Want to dive deeper into a single tweet? Hit the Tweet Details tab and prepare for the data to drop!

You can pull up the Tweet Details for any tweet you sent. When you do you’ll see the tweet (including any Twitter Cards) on the left of the screen and the details of the tweet on the right. In the example above it’s clear that the number of impressions the tweet earned was maximized in the first hour after it was sent, with a steady decline over the next 24 hours to basically zero. This is reflective of Twitter as a medium that values the ‘now’ over the ‘this morning’ or ‘yesterday’, and if you haven’t got traction in the first few hours after you send a tweet you probably won’t get a lot of traction for that tweet, period.

Interestingly, you can also see here a breakdown of the engagement statistics mentioned before. In this case the engagements were broken down into a single retweet, a single favorite, and a click through to my profile. That last one is significant – and a good reason to spend time making your profile page look good – as it suggests the reader wanted to know more about me, the tweeter, as well as about the subject of my tweet. By clicking through to my profile page they are served my most recent tweets and, if they like what they see, I might win a new follower. Neat, huh?

I’ve got about 100 followers on Twitter – but you didn’t need Twitter Analytics to tell you that. Clicking over to my profile shows that number for all to see. It’s public information.

The growth in my followers, though, is something that only tools like Twitter Analytics can demonstrate. As the graph above shows, those 101 followers have been attracted fairly consistently over the course of the last four months since I returned to Twitter. The graph is not smooth and there are days an weeks when I go up, only to dive down a couple of followers the next day. But a graph like this gives me a nice graphical representation of how and when I am attracting new followers on Twitter.

It also tells me when something strange is going on.

See the big jump in November? And the equivalent big decline in December? Something’s going on there that is out of the norm for my Twitter account. In this case I managed to pick up a couple of dozen spam accounts as followers in the space of a couple of hours one afternoon. I didn’t follow any of these accounts back and, a few weeks later, either the people behind the accounts or Twitter (in one of its regular clean ups) stripped them from my follower list. Again: neat, huh?

Knowing how many followers I have, when I got them, and the rate at which my follower numbers are rising or declining is one thing. But Twitter can tell me a lot more about the people I tweet to than just how many of them there are.

As the screenshot above demonstrates, Twitter is able to tell me what my followers are interested in (mainly finance, technology, education, and entrepreneurship), some of the more unique interests they have (SEO and Eastern Europe), where they live (the US, France, Italy, and the UK), and even what cities they live in (more than half live in either New York, Montpellier, or Lyon). I can even see that men outnumber women in my follower list by about 6 to 4.

Twitter also tells me what other Twitter accounts people who follow me follow. This is useful as it stands to reason that what my followers tend to enjoy following is also likely to be something I’ll enjoy to follow. It’s no surprise to see news, tech, and local Twitter accounts listed on the right of the screen.

Twitter Analytics is a free and easy way to dig deeper into your tweet stream, learn about what sorts of tweets work best for you, what your most popular tweets have in common, and exactly who you are tweeting out to. Never forget that Twitter is a social network and, like any social interaction, the better informed you are about who you are socializing with, the more effective your networking will be.