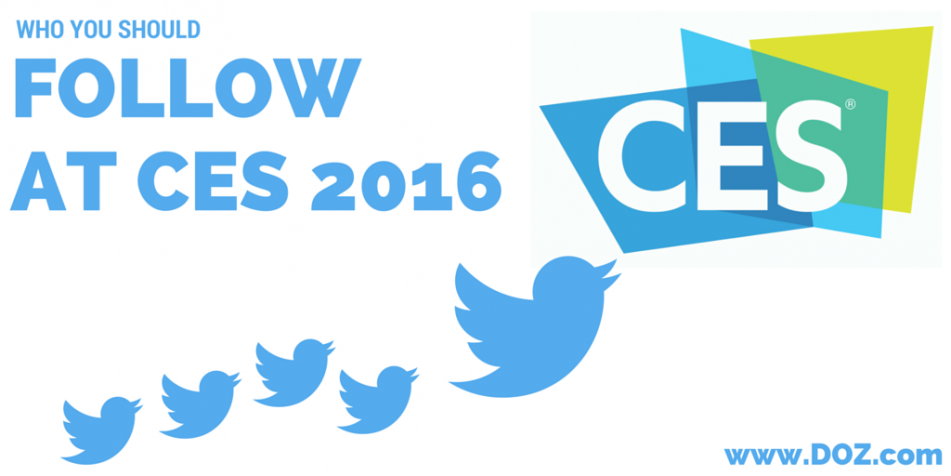 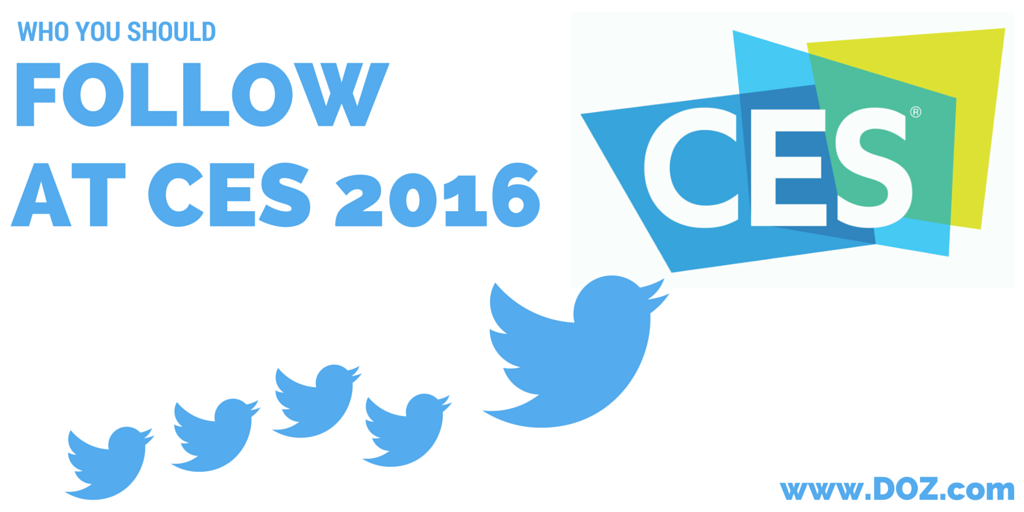 Not everyone is lucky enough to be on the ground in Las Vegas for CES 2016.

But that doesn’t mean that you can’t keep up with all the latest in consumer electronics, the product launches, and the industry news emerging from the world’s largest consumer tech event of the year. In this day and age of social media, 24/7 cable news, and websites delivering updates for readers scattered around the world, there’s no reason why interested people cannot follow CES 2016 closely from wherever they are.

Indeed, there are many people whose livelihood depends on making sure what happens in Vegas doesn’t stay in Vegas.

But just who should you be following? Who delivers the best value? And who has the best – or most amusing – take on the hundreds of pitches and products that companies will present at CES 2016?

DOZ has scoured the internet and are proud to present the six people that you should be following on Twitter to stay on ahead of the curve and well on top of everything at CES 2016.

Peter Kafka has been writing about technology and new media for almost twenty years now. He started his career at Forbes in 1997 and later moved to their eponymous online division in 2005, He has written for Silicon Alley Insider, Business Insider, AllThingsD.com before joining Re/code, now a Vox Media site. Kafka’s coverage of media and consumer tech at Re/code is solid and his tweets are amusing and eminently retweetable.

A Hollywood publication with a must-follow voice from CES 2016? You bet. Natalie Jarvey is the tech and digital media reporter at The Hollywood Reporter and regularly delivers some of the best reporting in consumer technology around. Jarvey’s connections allow her to break stories on the west and east coast alike – see her recent exclusive on the New York Times soon-to-be-launched podcast – and she keeps her Twitter feed full.

My propensity for falling asleep by 10 pm is not conducive to Friday night Netflix binge watches. #MasterOfNone

Mashable is a daily read for the marketing team at DOZ, and Lance Ulanoff’s technology beat is a big reason behind that. Not only does he head up technology reporting for the site, he is a also a force on social media with more than 80,000 followers on Twitter and nearly 22 million loops of his Vines having been viewed. He’s got a playful side when it comes to social media and has the industry connections to deliver breaking news first.

So whatcha working on today, @Elon? Asking for a friend.

Danny Sullivan is a stalwart of the marketing and technology scene and, though he might be best known for his interests in and writing about search engine marketing, he’s no stranger to consumer technology and new media, either. Marketing Land maintains a special sub-site for its CES coverage and the live blogs from the event floor are a highlight. On Twitter, Sullivan is likely to be active and his idiosyncratic style always raises a smile.

Kids, Google+ is this thing that was like Facebook. You heard people making jokes about it, perhaps.

Scott Stein is the go-to guy at CNET when it comes to wearable technology. And with wearables set to be big in Vegas once again, Stein is going to be a voice to heed when it comes to what’s hot, what’s not, and what’s pushing the envelope of watches, earbuds, and health/fitness monitoring. On Twitter he is always keen to share tidbits of his daily life, laughs, and frustrations, along with a plethora of tech news, too. Look for him to Periscope from the floor.

VR in 2016 will be a massive flood of utterly insane experiences to try nonstop. Should be fun!

A Senior Writer at leading industry news site TechCrunch, Jordan Crook led the coverage of CES for TechCrunch.com at the 2015 Consumer Electronics Show. For CES 2016, Crook will be back and breaking stories for TC and their hundreds of thousands of regular readers. Expect Crook to be reporting, tweeting, podcasting, and producing video live from Las Vegas – her style is accessible and fun, and always supremely informed. Just don’t keep her waiting at the airport.

.@united you are either understaffed or incompetent in terminal 2 at Heathrow. Five people have been in line for half an hour.

In our CES 2016 list above we’ve focused on journalists, writers, and influencers.

But of course, these aren’t the only people (or businesses) that will be breaking news out of Vegas this week. Indeed, a lot of the news will be broken by the PR machines of the companies that are banking on CES to drive sales, increase buzz, or prove a concept is potentially profitable in the weeks and months before its wider, public launch.

So who else should you be following on Twitter to make sure you get the breaking news first? Among the companies expected to announce something significant at CES 2016 (and therefore worth following) are:

We narrowed our list of who to follow down to eight individual Twitter accounts and four other accounts that should serve up some interesting news during the week of CES 2016.

But don’t forget: CES is the world’s biggest consumer electronics, new media, and digital technology convention on Earth. Tens of thousands of people will be on the convention floor every single day and this means there are plenty of influencers, creators, inventors, makers, and journalists we didn’t include.

Did we leave you smacking yourself in the head and asking, “How could they leave her out?” or shaking your head wondering “Are they seriously not listing him?”.

If so, let us know in comments below or on Twitter – we want to hear your ideas!