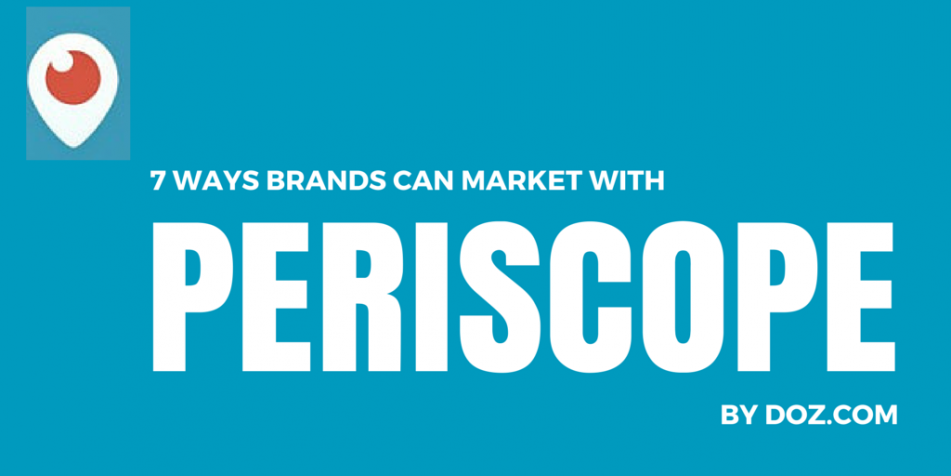 7 Ways Brands Can Market with Periscope

For a few weeks in March there was a new app that everyone was talking about: Meerkat.

Meerkat offered users the opportunity to livestream video of, well, anything to a global audience. Download the app, tap a few times, and whatever you were pointing your phone at could be streamed live to anyone on the planet. The smartphone had evolved once more: no longer just a means of staying connected 24/7, it was now a television studio in your pocket.

Brands quickly took to the platform and, at SXSW, Meerkat was the talk of the town. The tech, media, and marketing worlds logged on and watched parties, events, and more than a few self-promoting individuals livestream their days and (mostly) nights. Meerkat quickly secured $14 million in funding and the latest ‘next big thing’ in social media was born.

Quickly, though, Meerkat was overtaken by a Twitter-owned alternative called Periscope. With a cleaner design, a nicer UX, and the ability to access recorded videos after a stream is closed, Periscope overtook Meerkat in a matter of days.

It was through Periscope that the team at DOZ watched DOZ CEO Anji Ismaïl deliver his keynote address at ClickZ Live in New York City – in fact we watched on two different Periscope streams from two different people in the audience – and it was clear to the entire team that this was an application and platform that would change the way that brands share content.

Here are ten ways we can imagine brands taking advantage of livestream social video in the near future.

The product launch that was livetweeted can now be livestreamed, and for brands who spend a lot on preparing and hosting launch events this is going to pay off. The celebrity who is paid a small fortune to appear at the event is so much more effective as even a temporary spokesperson when the world gets to see them in person rather than just in 140 character bursts. Twitter will remain important for outreach, but brands won’t be limited to text or have any need to spend big for live virtual events.

Everybody likes getting a peek behind the curtain and offering fans a chance to go behind the scenes is great for engagement (that’s the reason those hours of ‘extra footage’ are consumed by film fans). With Periscope brands have a chance to not only take their followers and fans behind the scenes, but to do so live. This adds a raw, uncensored feel to the experience and generates that most important of qualities: authenticity. If a brand is willing to bare its soul – or at least part of it – live, trust and engagement will rise.

Picture it: ‘We’ve sent our team out into the city and they are streaming what they see live. Be the first to find them and win!’. Consumers love promotions that are fun, active, and allow them to turn to a friend and exclaim ‘Hey – that’s right around the corner, let’s go!’. Smart brands will find ways to use live video streams to engage consumers in promotions, real life product hunts, and giveaways. Winners will have their winning ‘Hi, Mom’ moment streamed to the world and hared – great for influence marketing on social media.

We’ve written about ambush marketing before and its prevalence at sporting and cultural events worldwide. Periscope and apps like it are going to take that sort of ambush marketing to a brand new level. A brand that is going to try and sneak a camera crew into a stadium to film a stunt is going to be stopped before they get close to their seat. But a brand that sends ten employees into a stadium with nothing more than an iPhone in their pocket and knowledge of the coming stunt? Perfectly possible. Get set for some next-level ambush marketing ahead.

GoPro-style videos are incredibly popular on YouTube. Getting the participant-eye view of a speedy mountain bike descent or snowboard session is interesting to almost anyone as you get a ‘in their shoes’ take on an adrenaline-packed activity. Periscope allows you to take that to the next level with live video streaming of the race, the descent, and all the action before and after. Why should adrenaline junkies have to wait for their heroes to get home to upload their GoPro footage when sponsoring brands can help them watch live and in living color?

For brands craving authenticity a live streamed interview is going to triumph over a well-edited, perfectly-lit, and audio-balanced YouTube upload any day of the week. Periscope connects the subject of the interview with the fan base immediately and in real-time – what could be more authentic than that? Add in the ability to respond to questions from the viewers of the stream and you’ve established an authentic medium for communication with the people who support, love, and promote the brand.

Brands sometimes need to take their ideas straight to their communities and test them out. Maybe it is a new perspective, maybe its a new feature, or maybe it is a whole new direction – whatever it is, customer and client feedback is going to be important. Periscope allows brands to reach out to its most connected and engaged customers immediately for an on-demand focus group session. With viewers encourage to hit ‘heart’ to send positive feedback, getting a read on your crowd might be as simple as firing up an iPhone.

People are quick to call any new app a ‘game changer’ and throw good money at the latest thing – Pets.com, anyone?

But streaming music and streaming video sites are popular, social media and social sharing are popular, and apps like Periscope that are well-thought out, well-designed, deployed widely, and backed by the know-how and cash that companies like Twitter have to spare are exactly the sort of game-changing product that should be getting attention and investment.

Brands have a real opportunity to grab hold of Periscope and livestream video to fans, followers, and the world at large. The seven ideas above are just the start of how Periscope might add to a brand’s media marketing arsenal, and we can’t wait to see what comes next.