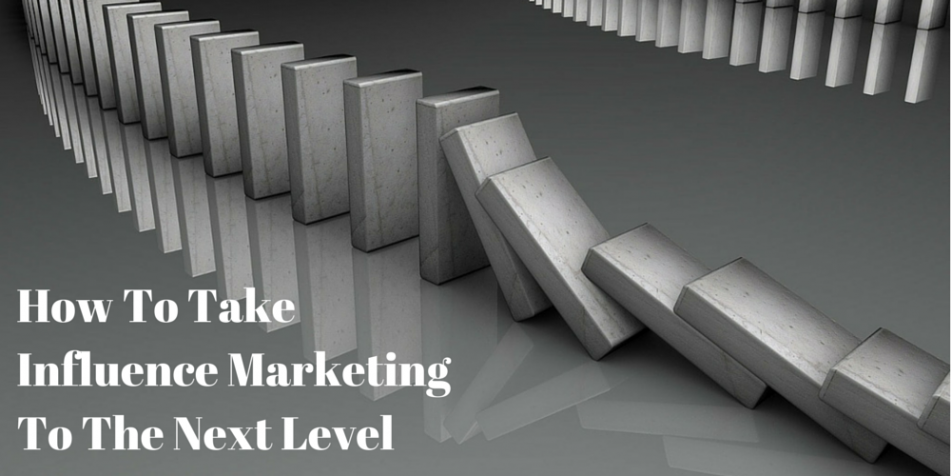 How To Take Influence Marketing to the Next Level

We’re all a product of the people who have influenced us.

Our parents, our brothers and sisters, family, friends, colleagues – these people represent a world of influence in our everyday lives.

Then there are the other influencers.

The voices on the radio, the talking heads on the television, the politician who knows how to deliver a line, and the actress who can do the same but with a more intriguing smile.

We’re influenced in our actions by the movies we watch, the billboards we pass, and the music we listen to.

Marketers know this – indeed, the marketing industry relies on being able to influence the choices of an audience. That’s what marketers do: we seek influence.

For a long time the search for this influence meant broadcasting a marketing message to the largest audience that you could find. Marketing managers would tell clients to advertise in The New York Times because everybody buys the Times on a Saturday morning. Agencies would press clients to buy that TV spot in prime time because that’s where the audience was waiting to be influenced. And a Super Bowl spot? Well that was perfect: 100 million sets of eyeballs glued to the screen waiting to be influenced.

Agencies and marketing managers don’t do that quite so much any more.

And if you’re working in digital marketing, you do it rarely, if at all.

The reason why is simple: we’ve learnt that you cannot influence people by shouting at them for 30 seconds on Super Bowl Sunday as effectively as we can influence them by reaching out via those people who influence them every single day. The mothers, the fathers, the friends, and the colleagues.

We now know we can convince and convert a greater share of our potential audience by specifically targeting influencers, and not by spraying the target audience with messages that fade into the noise.

We also know that, by reaching influencers, we can build brand awareness, develop brand loyalty, and create brand advocates, even brand ambassadors.

It’s for this reason that many agencies, digital marketing firms, and consultants have embraced influencer marketing a key plank in their marketing strategy. Influencer – a term rarely heard last century – has fallen into the jargon of almost every marketing professional. It’s a buzzword, in some senses, and even a quick Google search for ‘influencer marketing’ now returns over 13 million results.

Indeed, while there are standout success stories in influence marketing we can all point to, there are just as many attempts at marketing to influencers that have failed; failed either to gain traction, to deliver anticipated results, or just failed, period.

So let’s go back to basics, start at the beginning, and define this idea of ‘influence marketing’.

At DOZ we talk about influence marketing having four levels.

The first level involves identifying who the influencers in an industry are, having some idea of who on this list are the most important – in essence, creating a ranking of the most influential people in a sector. Let’s call this first level the WHO level.

The third level of influence marketing is where we market via the networks of our influencers. We raise the awareness of a brand or a product by taking advantage of the influencer’s own networks. They broadcast our message and hopefully bring in the eyes and ears of their network. Let’s call this third level the THROUGH level, because we’re marketing through them.

We call this fourth level the WITH level.

At DOZ we believe that brands and companies need to move towards working at the WITH level, the fourth level. We also believe that many times companies fail to succeed as influence marketers because they never escape the WHO or TO levels.

The goal of this post is to take you through each of these levels and show how you can move yourselves, your agencies, and your clients from simply talking about influence marketing and identifying influencers through to working with those influencers to the benefit of everyone: client, marketer, and influencer. This process of moving from knowledge to collaboration, from understanding to execution, is something we refer to at DOZ as creating collaboration.

Level One: The WHO

We always start at that first level of influence marketing: the WHO.

Figuring out who is an influencer means doing some basic research about the industry of the client we’re working with. Usually it is not too difficult to determine who the key influencers in an industry are. We look for LinkedIn connections, Twitter followers, thought leaders writing or getting written up in Fortune or Time, Fast Company or Inc.

How many people should make this list of influencers? Short answer is: all of them.

In reality, that answer needs to be a little longer. Identifying the influencers is one thing but being able to contact them all, engage with them all, and work with them all is going to be something that is outside of the reach of many small and medium campaigns. It’s just not physically or fiscally possible for a lot of brands to reach all of the influencers they’ll be able to list.

So why list them? Because if you get influence marketing right then you’ll grow. And when you grow you’ll want to know where and who to contact next. That information will be in your long list.

So make it as complete as you can, include people at the top and the bottom of the ranking you may not contact for a year or more – but make sure they are there.

Once you’ve got your list it’s time to move on to the next step: the TO.

Level Two: The TO

The task here is to reach out to the people you know are influencing others and market directly to them. Make them customers, make them fans, get them on board, get them buying, and hopefully get them mentioning that they did.

This is not broadcasting; indeed, it’s the opposite. It’s the narrowcasting. You’ve identified a group of people not by demographics, economic status, likes or dislikes, but influence. The group is relatively small, you can list them in a couple of pages, and when you reach out to this small group it can be a narrow, targeted, right-on message that speaks to them and their values, concerns, and needs.

At this TO level we are hoping to complete sales, to convince and convert these influencers to our message and our product. We know that if we get these influencers side they’ll likely tell their friends and pass the word to their network. Satisfy these people and we don’t only win a single customer, we win an influencer and we hope this convinces others to get on board with us, too.

But that’s about all we can do at this point: hope.

Because we’re not doing anything other than selling to a very specific group of people, and then hoping that they’ll do a little bit of promotion for us. We’ll win sales and maybe a recommendation. We’ll win a customer, and hope for an ambassador. There’ll be a little bit more cash in the drawer, but will it actually lead to anything more?

Not necessarily. So we have to move from TO to THROUGH.

Level Three: The THROUGH

We’ve seen incredible results when marketing through influencers. Mentions on major websites about a product of one of our clients can drive interest and deliver revenue streams. A blogger with an audience is much like a TV news anchor with viewers – they have influence, the chance to reach out to their network regularly, and an opportunity to influence them directly.

Renting these networks – and this is what we’re doing at the ‘though’ level – is effective.

But marketing through someone else’s network is always going to be a limited strategy. There is always the danger that the audience will be withdrawn or that the influencer will decide they are better served by collaborating with a competitor of yours. They might be a fan of the revenues that you deliver for them but it is only temporary. In short, there is not necessarily any loyalty to the brand or to your company, your product.

And that’s why taking the final step in influencer marketing, that step from THROUGH to WITH, is so very important.

Level Four: The WITH

When you choose to market WITH influencers you are working with brand ambassadors, not simply paid brand advocates. You are working in a partnership, not with a contractor.

And the relationships you build are more real, longer lasting, and more fruitful than those that rely on someone opening their network to you for sales and revenue reasons alone.

When you market with an influencer you still take advantage of their network.

But not because you are renting it.

It’s because you have earned it through the trust and relationship you have developed with the influencer who owns it.

WITH-level influence marketing is about working with an influencer to the benefit of you both. It differs from THROUGH-level marketing because the influencer is now an advocate and an ambassador for you and your product. They are excited about your product, they take on the marketing of your product for you, maybe even without your permission.

If that sounds scary, it shouldn’t. This is what brand ambassadors have been doing for decades.

From Influencer to Brand Ambassador

Of course, we never used to call them brand ambassadors. We called them customers, and we talked about how many people a person would tell about their happy experience with a business. We never thought about telling those customers what to tell their friends. To do so would have taken away the authenticity of that engagement and authenticity is what we are looking for and aiming for.

In short, if your influencer is not pinching themselves at some point, shaking their head, and saying to themselves ‘I can’t believe I am getting paid to promote something I love this much’, you are probably not working at the WITH level.

And trust me, the WITH level of brand advocacy and ambassadorship is what you need to be aiming for to leverage influencers in favor of your business.

Marketing is More than Making Money

Some people have said that marketing is all about securing sales.

What’s becoming clear now is that these people are wrong.

Marketing is not about securing sales; the sales arrive all by themselves if the marketing is authentic enough.

But what we also know is that connecting is not enough. The connection needs to be real, valuable, and rewarding for both the marketer and the influencer, and as a result, for the customer, too.