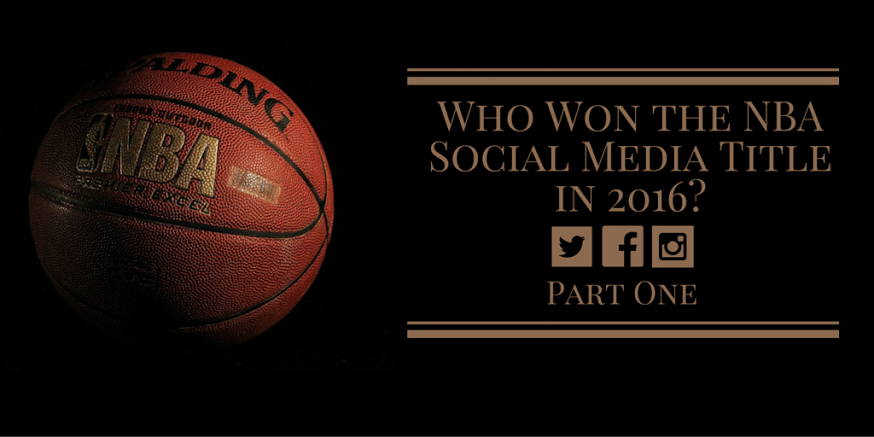 Who Won the NBA Social Media Title in 2016? Part One

The NBA season is over for another year and the Los Angeles Lakers are champs again.

What? You thought the Cleveland Cavaliers had won the title? Brought the championship back to Ohio? You could’ve swear that you saw Lebron James celebrating on the court, and you are sure you saw that Nike ad.

The Cavs walked away with the title after coming back from a 3-1 deficit against the regular season powerhouse Steph Curry and his Golden State Warriors.

And the Lakers? Well they won the off court game, the social media game.

And in the era of second-screening, live tweeting, and live streaming on Facebook that’s an important game to win.

In this post we take a closer look at the NBA teams and their season on social media. We’ll explain who came out on top on Facebook, on Twitter, and on Instagram. We’ll explain why a team with one of the worst on-court games has one of the best online games, and why the Utah Jazz might be a mid-conference team on the court but can’t seem to compete on any network in the social world.

The NBA Teams on Social Media

Here’s what we found.

After looking at all 30 teams across all three of the social networks we developed an overall social ranking. This was determined by adding the team’s rank for each network and then dividing by three. Hence, for the Oklahoma City Thunder we find it is ranked:

Here’s how the table looks for the entire league.

Breaking the Data Down

Based on their social score we can divide the teams in the league into a few different groups.

The Lakers, the Heat, the Bulls, and the Warriors represent a Golden Four. All are in the top five in terms of reach for all three of the social networks and the top three for at least one of those networks. Their average social score is a near perfect 2.8.

The Celtics, the Spurs, the Thunder, the Cavaliers, and the Knicks represent a Silver Five. Except for the Celtics who are ranked 11th for Instagram, every team is ranked in the league top ten for every social network. Their average social score is a respectable 7.1.

The Rockets, the Clippers, the Pacers, the Mavericks, and the Raptors represent a Bronze Five. These teams are close to the top ten in terms of reach for at least one social network, with the Rockets, Clippers, and Mavericks sneaking into the top ten for one of the three. Their average social score is a slightly above average 12.3.

Next up come ten teams that are performing below average when it comes to social reach. They hold up the rest of the table and average a social score of 20.4.

Then there are the Pelicans, Bucks, Nuggets, Wizards, and Kings, the teams we call the Terrible Five. These teams are ranked among the very worst in at least one of the social networks and 80% of the time they are ranked in the bottom third for social reach in the league on each network. Their average social score is 24.6.

And then there’s the Utah Jazz, a case we simply have to call the Worst Case Scenario. The Jazz are ranked 30th for Facebook reach, 30th for Twitter reach, and 30th for Instagram reach for a perfectly bad social score of 30. They are in a class of their own at the bottom of the table – and we’ll explain why a little later.

But before getting to the Jazz, let’s take a look at what makes a team successful on social media. In other words, what explains why the Lakers, Heat, Bulls, and Warriors have such great social reach and the Nuggets, Pelicans, Bucks, Wizards, Kings, and Jazz are just so damn bad?

We think there are four factors that come into play.

A History of Championship Teams

This year saw Cleveland clinch the title and bring a little bit of joy back to a city that hasn’t celebrated a major sports franchise wining a championship in more than fifty years.

Other teams, though, have a better track record bringing home championship rings and this seems to correlate with the social reach that those same teams enjoy.

The Lakers, for example, have taken 16 championships from 31 finals appearances. The Bulls have made it all the way to the final 6 times and won every single time. The Warriors were there this year, and the Heat has made it to the quarterfinals in recent years.

Between them, the Golden Four have won 42% of all of the NBA titles since World War II. This record of success has helped these teams to grow their fan base and reach out to a greater number of followers on social networks than other teams. Even when the current season is not great – the Lakers won only about a quarter of their games this regular season – the history of success helps keep fans following.

The same seems to hold for the Silver Five teams. The Celtics hold the NBA record for title’s won despite appearing in ten fewer finals than the Lakers. Overall, the Silver Five have won 36% of the post-WWII NBA titles, meaning that the top nine teams in our social rank account for nearly 8 out of 10 titles in the history of the league.

At the other end of the social ranking there are the hapless Jazz. The Jazz have made the championship game two times in the late 1990s and failed to convert both times. Ouch.

A History of Champion Players

We can connect the NBA’s own list of the 50 Greatest Players in NBA History to the teams in our social ranking. No surprise, the teams at the top of the table have played host to some of the greatest champions in league history.

Of the fifty greatest players in league history 21 have played for teams in our Golden Four. The Heat claims 1, the Bulls claim 5, the Warriors have been home to 6, and the LA Lakers have had nine of the top fifty on their list.

The other highly ranked teams – our Silver Five – also fare well in this regard. Indeed, they fare better than the Golden Four with more than half of the top fifty players of all time having spent time at one of those five team.

However, as shown in the chart, The Five Silver have in common more than half of the Greatest Players in NBA History (52%), meaning that either the correlation is not as impactful as we thought, or appealing marketing has not been done in the mean time.

And Utah? Well despite a couple of conference titles they have only managed to snare one player from the league’s top fifty in the shape of Karl Malone. Malone, of course, retired after a final season in Los Angeles with the Lakers, the number one team in our social ranking.

Yet to be fair, there are plenty of good players and many in the top fifty that have played with our Terrible Five teams, too. It seems that while having a champion player on your team is correlated with social reach, it helps immensely if the player is either currently playing hoops or only recently retired.

It seems to help teams grow their social reach if their local audience is large enough to provide room to expand.

The Golden Four teams are based in large cities or metropolitan areas which might also help explain their considerable support from over the world. Los Angeles and Chicago are the second and third biggest cities in the US, respectively. Miami, and Oakland are smaller with around 400-450,000 residents but both are significant draws for other reasons: Miami boasts a massive tourist industry, and Oakland’s proximity to the enormous San Francisco Bay Area provides a large base for fans, too.

The Silver Five teams are a little different with the size of New York – America’s largest city – mixed in with the far smaller Oklahoma and Cleveland, run the gauntlet of large urban areas to smaller state capitals.

The Bronze Five enjoy an average population of more than 2 million but perhaps demonstrate the limitations of the local population on social success. Despite the potential to reach millions of people every day the teams find themselves competing with other sports for attention. In Dallas, Houston, and Toronto the NBA is not the biggest game in town. Most everyone has heard of the Cowboy’s Stadium in Dallas – but can those same people place the Dallas Mavericks’ American Airlines Center? Even when the local population is huge as is the case with the Clippers, rubbing up against the LA Lakers makes for a hard drive to the rim.

At the other end of the table the Terrible Five average about half a million in each of their local centers. Is it any surprise that their social performance ranks below the bigger cities, too?

And poor old Utah? Well with a local population of less than 200,000 in Salt Lake City they are the smallest city to host a team in the league and is half the size of the 5th smallest city in the league, Minneapolis. It’s hard to reach out to the locals when there just aren’t many locals to be found.

Having a valuable team means fans will be intrigued, motivated, and driven to follow each and every move the players make. But what defines a valuable team?

Forbes has developed a nice ranking of where the value in the NBA is stacked and, no surprise, the teams with the most significant social followings are also among the most valuable commodities in the league.

Indeed, with just one exception (the Indiana Pacers) all of the 14 Golden, Silver, and Bronze teams can be found in the top 15 slots in the Forbes list.

In this case, lowly Utah actually redeems itself a little: they might struggle to find a local audience and their social network reach is the worst of any team in the entire competition, but they are still valued at a cool $875 million, and ten places and $225 million higher than the bottom ranked New Orleans Pelicans.

Lessons for Your Business?

Having a history of winning, some strong players, a local population to draw from, and some embedded value in your franchise all seem to correlate with success when it comes to social media reach. If you are one of the rare people who both reads The DOZ Blog and owns a professional sporting franchise, this is good information to have – but what if you don’t?

If your business doesn’t involve filling stadiums dozens of times a year, paying professional athletes millions of dollars to throw, jump, and run, or if a major part of your influencer marketing strategy involves something other than courtside seats for Jack Nicholson, can you still apply the lessons of the NBA teams and their social strategies?

The short answer is: yes.

The long answer? Well that’s coming in Part II to this post next week. Want to make sure you don’t forget to drop by and read it? Drop your email address in the box below and we’ll make sure to email you the link when it’s live.