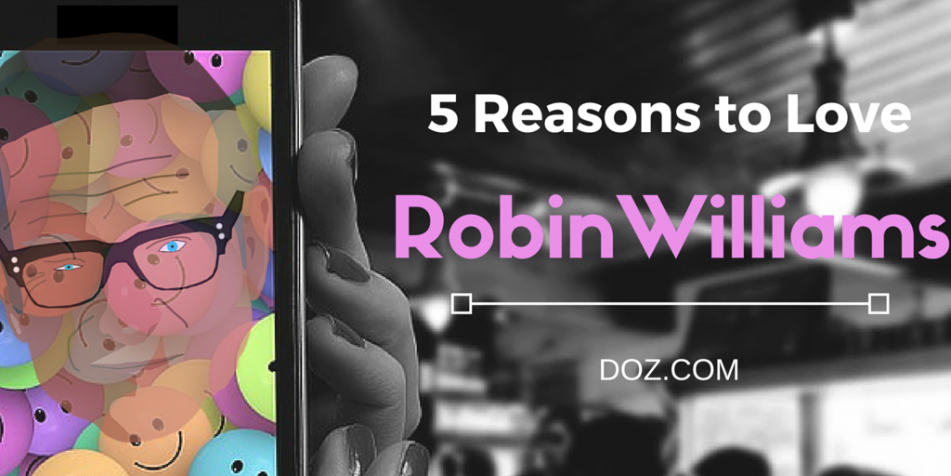 Although this 63 year-old man was loved and admired by pretty much everyone, he still couldn’t stand his Parkinson’s disease and his persistent depression, which drove him to commit suicide. Unlike human beings, your business cannot suffer mental, or physical disease; either people love it, or not. Either it works, or it doesn’t.

The gifted comic taught the world life lessons thought his acting, and made people love him for it. So, let’s dig into the process, and get out some profound successful business ideas.

Here is why Robin Williams was loved, and how you can get your business to be as successful as he was.

Robin Williams taught people a whole new and creative way of seeing life, people, and fame. He wasn’t the typical Hollywood actor: he didn’t look down at people, and would rather encourage them than despise them.

Try to be the same with your employees. Reward them with a compliment when their work was outstanding, and do not disrespect them. Trust your subordinates and treat them as members of your team, not as material used to make profit.

In the move Dead Poets Society the actor embodies a literature teacher showing his students new perspectives. This is what you want your team and your business to be: new, and flourishing.

From an outward perspective, giving your company a creative, unique vision will enable customers to feel closer to it, or at least to think about it as smart.

Allow your business to somehow change its vision into something valuable, that make people beliefs and emotions echo along with yours.

Have a look at these inspiring business purposes from different worldwide companies.

When US President Barack Obama stated Robin Williams was ‘one of a kind’ he was choosing his words precisely. The actor was unique, and managed to always add his touch to every character, making them lovable and amazing.

Without even mentioning stellar performances in Good Will Hunting or Mrs. Doubtfire, Robin Williams added so many libs in Aladdin, that the movie was ineligible for the Academy Award for the Best Screenplay. Instead, the man won one for the Best Adapted Screenplay. Crazy no?

Make your business also be a little surprising by giving it a culture your customers will feel part of. Just like Robin Williams did at a TED Conference by standing up on the stage during technical problems, try to improvise from time to time. Making spontaneous change in your commercial or ad-campaign, which would emphasize your culture and values will add a little ‘something’ to your brand – and make customers buy it.

One of the most noticeable things about Robin Williams is that, whenever you mention his name, everyone goes ‘O boy I loved him!’ and starts talking about how talented and amazing he was, and about how much they miss him.

Indeed, Robin Williams was not some kind of random comic, or actor. He was adored and admired. Just take a look at all the comments on his YouTube videos, and the many other pages that pay trubyte to his work – almost all of them are positive! He made people remember him for the good reasons.

His eponymous role in the movie Mrs. Doubtfire reminded how much he loved kids, and how daring and special he was. The movie is basically another example on how Robin Williams could shock in an exciting, and mind-blowing way.

If you can manage to do such a great job at entertaining customers with your business or your product, by triggering such powerful emotions; your clients will remember you and be willing to come back.

Be willing to impress them, whether they are having dinner with you or simply waiting for a service. This will increase their customer satisfaction and, therefore, their loyalty to your brand or company.

Not only was Robin Williams an improvisational master, he also knew self-derision very well. As an alcoholic, he often made fun of his disease, cheering up anyone who might also suffer from the condition. He always had something nice to say to everyone. He could talk about almost anything, and interpret almost any role.

In Good Will Hunting, he played the psychologist who helped Will (Matt Damon) with his life. Not only did he do so in the movie, but also in real life – he helped Matt Damon and Ben Affleck reach Miramax producers to produce their first movie.

And it was not all about filmmaking; he used to visit kids with terminal diseases in hospitals and cheer them up. As Ben Affleck stated ‘Robin had a ton of love in him’.

When talking about a business, everything is not only about clients. Think of all services that your clients may be waiting for but also think of your employees as well. Don’t be egoistic upon any of them: give them more. You’ll be surprise how much you receive.

Try to humanize your company by making your clients feel that they are not only another number on your endless list. Hire smiling, professional, and easy-going employees to satisfy your clients. Give your corporation a fun, and peaceful aspect to reward your employees. Learn that everyone benefits from generosity.

In his role in Jumanji, Robin plays an old guy stuck in the game for so long that he totally forgets about how it was outside of it. He helps kids out through the game’s jungle, making them survive and get out of the trouble. Once more, he was the one being trusted.

Make your customers feel they can experience more with you, more practical, more useful, more attentive, and more likable. Start to build customer trust by being as transparent as you can be, and as patient as you can afford to. Explain again, and don’t try to ‘lock them in’. Remember: they will stay if they like it. Your clients are birds – don’t cage them. If they feel they can trust you, they’ll come back to eat some more.

Robin Williams was a source of inspiration, and not afraid to speak his mind or even shock people. Somehow, he always ended up being loved and admired. People were drawn to him because of who he was – but most of all because of how he made them feel.

Make sure your business works according to these values and you will do it right. Make people be shocked, impressed, and inspired by your business model.

Make these birds want to come back and eat some more; the key is your hand, Mrs. Doubtfire.