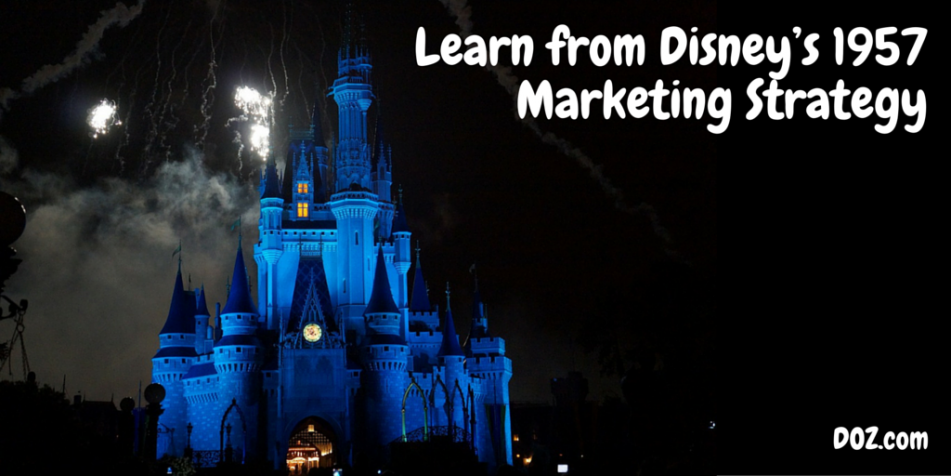 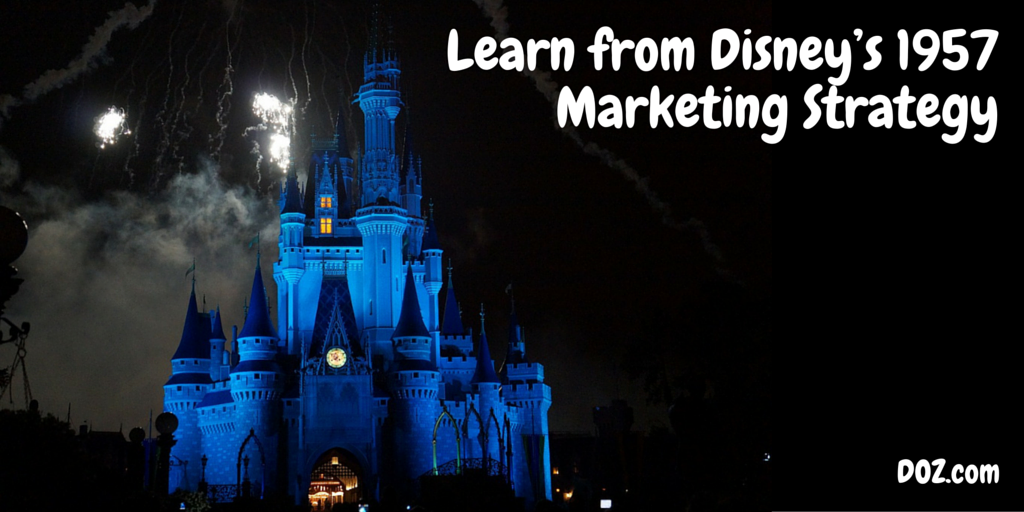 In a world where we talk about the values of tweets, engagement rates on Facebook, viral videos on YouTube, loops on Vine, and advertising on mobile devices, is there anything for the modern digital marketer to learn from a 60-year-old marketing strategy?

In this post we’ll be taking a look at Disney’s marketing strategy from back in 1957 and explaining the different elements, the way they work together, and the way that digital marketers can apply Disney’s decades-old model to their digital marketing campaigns in the present day. 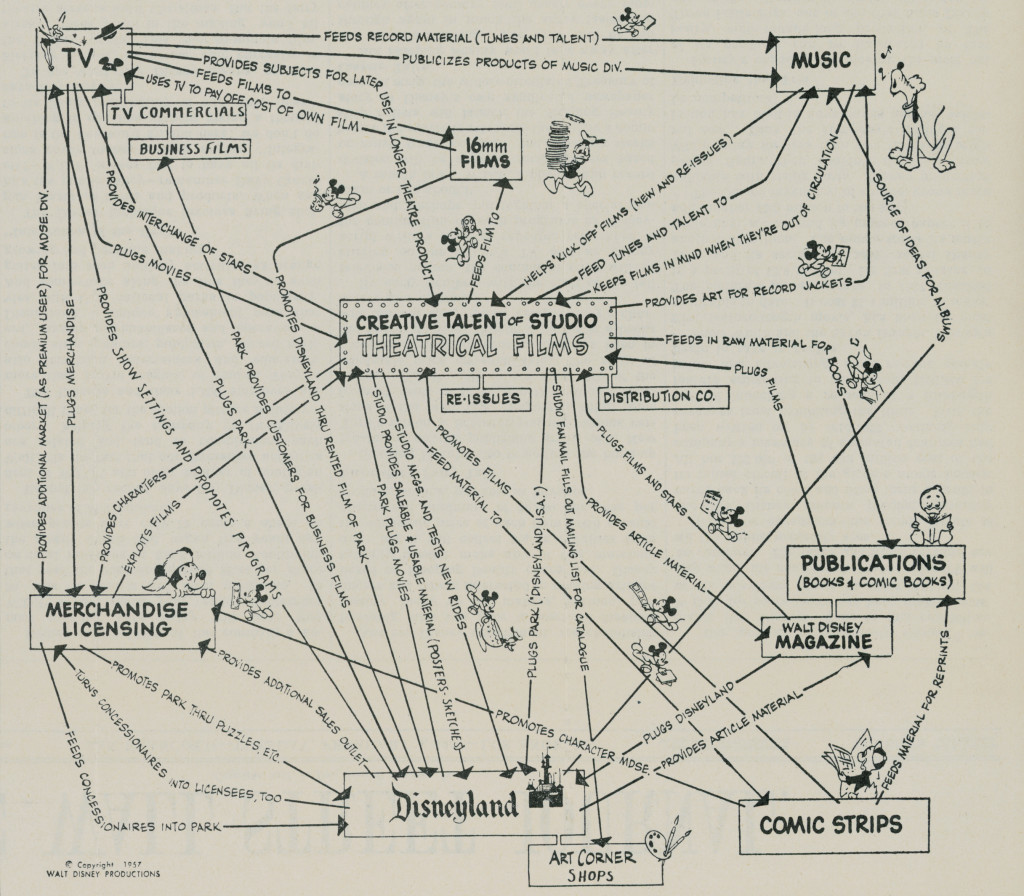 At first glance it is something approaching a flowchart or a very basic infographic. But what it really is is a marketing strategy that is applicable today as it was in the 1950s when it was developed.

Let’s unpack the elements in the image.

At the center of the strategy are Disney’s Theatrical Films. They are what Disney is best known for and the basis for the rest of Disney’s business. Whether classics like Snow White and the Seven Dwarves or Dumbo, or in more recent years the collaborations with Pixar or in-house global hits like Frozen, these are the first things that people associate with Disney.

Other key elements in the Disney strategy are represented in the boxes surrounding the Theatrical Films centerpiece.

In the top-left corner there is TV, with associated elements like TV Commercials and Business Films also parts of the Disney plan. Moving clockwise, next comes Music and then Publications. The latter includes both the books and comic books that feature Disney characters as well as the Walt Disney Magazine that highlights the entire company.

Next are the Disney Comic Strips. These would be published not only in the company’s comic books but also in newspapers across the US and, eventually, the world. There’s also Disneyland, the company’s eponymous theme park and resort (at the time there was only one park) where Disney characters dominate the entertainment and attractions.

Finally, there’s Merchandise Licensing, the final key in the Disney marketing and revenue generation strategy. If this was important in the 1950s it is even more so today: as Bloomberg reported, Disney expected to record $734 million in US ticket sales for the most recent Star Wars film, a figure dwarfed by the $5 billion it expected in merchandise sales.

With the elements outlined, let’s look at some of the ways these elements work together as part of a coherent strategy.

To demonstrate how the different elements in the Disney strategy work together we can follow a hypothetical Disney film from the center of the strategy through the other elements of the strategy.

So consider a new Disney film based on adventures at the world’s leading marketing marketplace and SaaS solution for businesses: The DOZ Story.

Hey, we can dream, right?

So Disney develops a feature film and, when the musical score if produced, it gets pumped up by Disney’s music division. The music division will promote the songs from the movie – Let it Go, anyone? – and drive further interest in the movie either as a new or a re-release.

The movie is released on 16mm film (today that would be digital, of course) which is fed into television, too. The TV division will produce commercials to support the film and promote it to audiences, and may even use the characters from the film in corporate promotions, too.

Of course, the TV support will help drive the merchandising of the movie. Disney will license almost any product in support of the film and so t-shirts, coffee cups, beach towels, and posters will be produced in the millions to drive fans to spend up in Disney stores and affiliated retailers, and to drive even further interest in the film.

As the merchandising takes hold it’s on to Disneyland. Life-sized characters can interact with children and adults alike in the theme parks, and rides and attractions can be developed to further capitalize on the film. The theme parks help Disney to generate revenues from a film long after it has disappeared from cinemas. Example? A Dumbo carousel, Snow White and her tiny co-stars leading a Main Street parade, and even Mickey Mouse driving engagement at Disney parks worldwide decades after he first whistled a tune in Steamboat Willy.

The Disneyland attractions and experiences around the movie will provide fresh content for the Walt Disney Magazine and the characters from the film can form the basis for a comic strip or a comic book, or even a comic book series.

What was ‘just’ a movie is in fact only the first step in a multi-element marketing exercise that squeezes revenue from keen consumers at multiple points.

There’s the box office, the television program, the soundtrack, the inevitable merchandise offers, the books, the comic strips, comic books, and the rides, souvenirs, and attraction at the company theme park.

It’s both simple and complex at the same time, and there is a lot that modern-day digital marketers can learn from the strategy.

Three Things to Learn from Disney

First, there’s the notion of reusing content or atomization. When Disney makes a movie it is not content to wait on box office receipts to see a return on their investment. Instead, every film is cross-promoted as a musical endeavor, a TV special, a theme park attraction, a book, a comic book, an entire range of merchandise, and eventually re-released as a film to generate revenues decades after it is first in theaters.

It’s a smart strategy that any marketer can apply in the current context. Publish a post on your company blog, then repurpose it for LinkedIn, Quora, and Medium. Take the best parts and package it into a SlideShare deck, and combine the best articles on the same theme into premium content like an eBook. You can narrate the post and release it as a podcast, or film yourself doing so for a video podcast. Share a relevant GIF on Twitter linking to the piece, launch an Instagram contest around the theme of the post, and look for ways to reuse the content to reach a bigger, qualified, and interested audience.

Second, there’s the idea of building a cross-content support strategy. Disney is not just atomizing their content and repurposing it to develop revenues elsewhere. They are also ensuring that the content they repurpose supports the original content, too. The soundtrack not only helps the film it also supports sales of the film. The merchandise derived from the film adds to interest in the film, the appeal of the rides at Disneyland, and the eventual TV specials and comic book releases.

Marketers today who repurpose their content need to make sure they are doing more than just pumping out more content on different platforms. The audio podcast needs to support the blog from where it was born, the slide deck needs to link to the podcast and the blog, and the blog needs to promote the video, audio, and infographics that are produced. This has the effect of creating a web of content in which a reader or customer can find themselves enmeshed quickly and with positive effects for the business and brand.

Third, there’s no need to embrace every new platform to get a marketing strategy to work. Disney was sticking with what they knew well: film and TV production, the music that emerged from the film, comic books and comic strips based on their animation, licensing of their images and brands, and a theme park. There’s nothing there about billboards, newspaper ads, o radio, for example, all marketing technologies that were popular at the time. Further, by merchandising instead of manufacturing, the company stuck with what they were good at (IP) and not what they weren’t (printing, producing, and building).

Transport yourself to the present day and consider what your company does well and knows inside-out, and what they don’t. Stick to what marketing efforts you know well and can produce at best-in-class level and leave the rest to people who understand the area better than you. Want a podcast but don’t know where to get started? Don’t try and be the specialist that you’re not – outsource it to someone else. Don’t market yourself on a platform that will see a payoff lower than your investment of time, energy, and financial resources. Like Disney, focus on what you do well and leave aside the areas where you cannot do well.

Disney’s 1957 marketing strategy is a great example of timeless truths in marketing. The fact that it is nearly 60 years old doesn’t mean it is outdated; rather, the evidence suggests that Disney’s strategy is just as applicable in today’s marketing environment as it was back then.