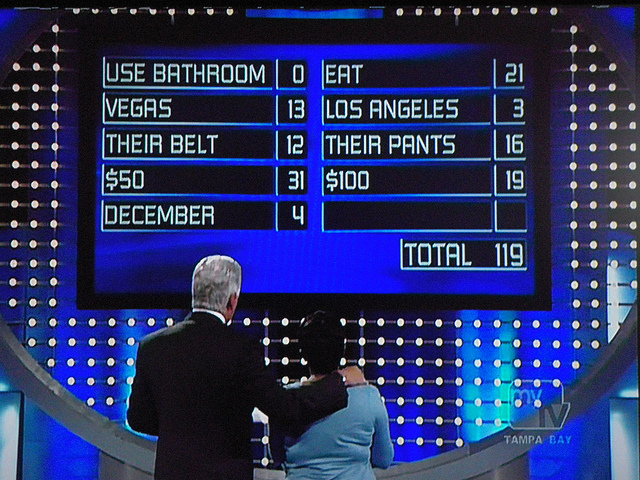 You may never have heard of Mark Goodson but it’s almost certain that you’ve heard of some of the TV shows he produced in his 50 year career in American television. Born 100 years ago on this day in Sacramento, California, Goodson was the mind responsible for bringing such winning TV recipes as The Price is Right and Family Feud to screens in the US and around the world. All in all Goodson produced more than 50 different game shows before retiring at the age of 76.

Goodson, along with partner Bill Todman, was known as a ‘gameshow guru’, responsible for bringing smiles into lounge rooms across the world. Yet he was above all else a master of marketing, always seeking the niche he might exploit to improve sales and drive viewers to the channels he served. Looking back at his long career there is plenty that a marketer can learn about how to approach promotions and product, whether selling gameshows to TV stations, products to consumers, services to enterprise, or anything else besides.

It’s a keystone rule of business but it bears repeating: not everything you touch will turn to gold.

Goodson might have been the ‘gameshow guru’ but take a look at his career and you’ll see many more shows that failed than ones that became household names. For every Family Feud there’s a half dozen you’ve never heard of. Call My Bluff lasted a single six month season back in 1965 before being canned by the NBC network. Number Please lasted a little longer back in 1961 but was cancelled by ABC before the end of the winter. Count them up and around a quarter of all of Goodson’s gameshows never aired for longer than a year and only around half managed to stay on air for more than two years.

In short, one of the most successful gameshow producers in history saw just as much failure as he saw success. Keep that in mind the next time you’re thinking about beating yourself up for another product that went undersold.

Goodson was well known in the US and his gameshows kept millions glued their screens in that country every night for decades. But he never limited his ambitions to the United States. Indeed, Goodson was quick to see the potential of television as a technology to deliver his shows to audiences worldwide, as long as he tweaked the titles and formats to local cultures and tastes.

Take one his big hits, Family Feud. The idea of two families fighting it out on television to see which one comes out on top fits perfectly with the ultra-competitive American culture. Yet try and sell the idea of feuding families to the more restrained British and you’ll run into problems. Hence, when Family Feud made its way across the Atlantic it became Family Fortunes, with the emphasis on the prize rather than the fight.

Or take another of Goodson’s hits, The Match Game. While this show ran for nearly 20 years in the 60s, 70s and 80s (and even enjoyed a brief revival in the 1990s) the name would be almost entirely unknown in other countries. The UK version of the show enjoyed its own 20 year run under the name Blankety Blank while the Australian version added a letter to be known as Blankety Blanks. Gameplay was similar but adapted to local tastes and humour in every one of the nine countries that saw a local version of The Match Game.

Even in the age of the interconnected, globalised world, if you’re taking your product or service international it pays to tailor your marketing to local tastes and to the local culture. Maybe you’ll need to rename your product, maybe you’ll need to use a local marketing firm to make your pitch, or maybe you’ll have to hire a couple of local consultants to clue you and your team in about local concerns before you make the pitch yourself. What you shouldn’t do, though, is close your eyes to culture if you want to see your product succeed.

You Don’t Always Have to Reinvent the Wheel

Take a look at Goodson’s resume and you’ll see recurring themes: guessing the price of a consumer product, gameshows pitting families or friends against other families or friends, games that give celebrities a chance to interact in a less than serious fashion, and games where people play charades, act out, or otherwise perform for the camera.

This repetition in theme and style doesn’t mean that Goodson was out of ideas or was incapable of innovating. Instead, it speaks to a universal truth of business recognised by everyone from Goodson to Jobs: you don’t always have to reinvent the wheel to have a successful product.

Not every product you sell or service you provide is going to be entirely new and there is no shame in reproducing something that works elsewhere or has worked for you before. Indeed, there can be great value and significant returns in revisiting previously successful products or services, tweaking them slightly, and selling them on. At the very least you’ll have a proven track record to inspire confidence in your customers, and at best you’ll see your derivative works go on to the sort of success that Goodson enjoyed.