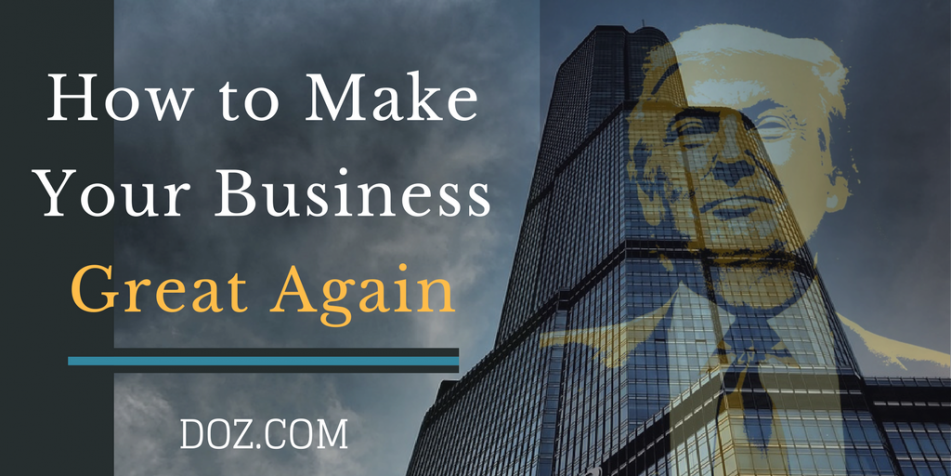 How to Make Your Business Great Again 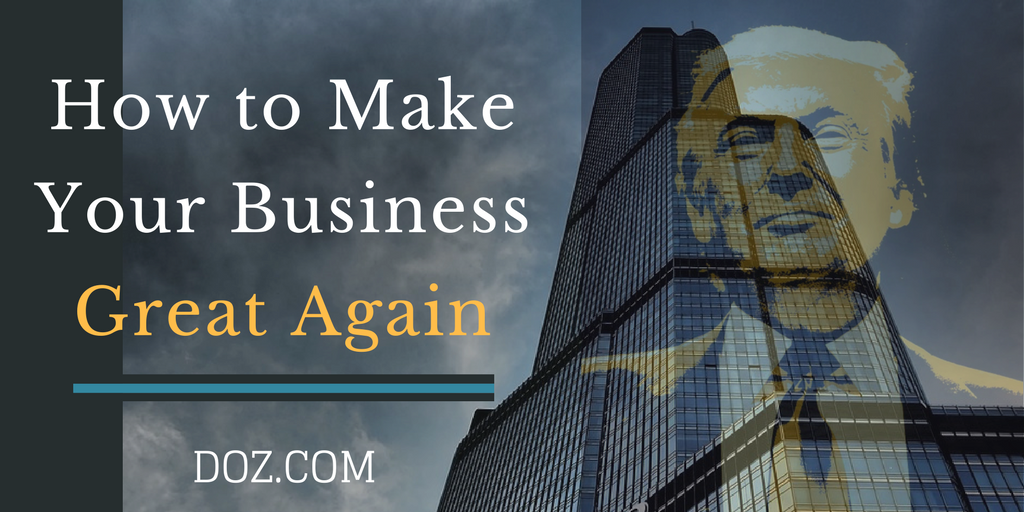 Tomorrow the world will assist to Trump’s inauguration ceremony as the 45th President of the United States of America. Other than the weird transition between two opposite Presidents (Obama – Trump), we can acknowledge that the current 45th did a great job in terms of marketing campaign. Indeed, the product (himself) was sold to a whole country, and the 300 million U.S. citizens are now unveiling Mr Donald Trump as a President.

Here are the positions President Trump took during his Presidential Campaign, along with his promise to make America Great Again.

And here is how you can, as a marketer, schedule your own outstanding campaign, and make your business rise up to the Presidential level.

The Country is a Business

One of the big characteristics that defines Donald Trump is his current status as a businessman. Whether he is successful or not is another matter to discuss; however, people remember from him his billions of dollars, his multiple companies, and his house made of gold.

As he states it (“perhaps it’s time America was run like a business“), he will be making the best of the American economy by treating it like his own company. The least we can say is that whether or not it is a good idea, it still has the benefit of advising us on managing techniques, or strategies we would not have thought about.

Healthcare – “The Stupidity of the American Voter“

One of Trump’s biggest promises terms of healthcare undertaking is the suppression of the ACA aka Obamacare and the massive privatization of health insurance. He also states that public insurance such as Medicaid should be locally managed by the states themselves.

Immigration – “Pay for the Wall”

Although Trump may not have been as clear as this during his campaign, he still brought up the intriguing, yet extreme idea of building a wall between the U.S. and Mexico, in order to reduce illegal immigration, and its downsides. He also thought about deporting the 11 millions of illegal immigrants back to Mexico (mainly) in order to make the U.S. a safer country to live in.

Throughout his whole campaign the ISIS is a topic Donald Trump was excited to mention at every possible time. He shares the Russian’s opinion about foreign policies, and as far as the Middle East is concerned, he believes the U.S. should have nothing to do there other than taking control over the ISIS’s resources and cutting them in order to dismantle the whole terroristic organizations.

Your Business is Your Country

Comparing a business to a country may seem overruled for some, but a smart parallel can be made between both. Thus, if President Trump treats a country the way he would treat his business, let’s try to apply the reverse process.

What Trump advocated in his campaign was the privatization of healthcare, and self-management in states for public insurance. The smart move the U.S. President had of proposing a decentralization in insurance gave the U.S. citizens a feeling of independence and freedom. They felt like they could choose, and dispose of their own income in whatever way they wanted.

Let your employees dispose of their own time. Give them more responsibilities – or at least as much as they can receive depending on their profession – and start trusting them. Building strong bonds, and respectful relationships with them will increase their happiness, which will, ultimately, positively impact your company’s profits. Plus, let’s face it, it feels better to work in an enjoyable atmosphere.

RELATED: How to Reach Success With Good Marketing

As it is commonly known, ambition drives motivation. Discipline, focus, and passion are fairly interesting side-effects of ambition. Thus, being or working for an ambitious leader often – if not always – increases the overall organization’s will to work harder and achieve more. Quite very simply, ambition is an essential component of one’s happiness.

The one big thing that surprised – if not shocked – everyone was Donald Trump’s main claim during his whole campaign to “build a wall” between the U.S. and Mexico and have Mexico “pay for it”. He also wants to deport all illegal immigrants. It is “a package”. This is a project that can be qualified as ambitious. And whether or not you may think about it as crazy, it still remains something big, potentially achievable, that happens to motivate American citizens.

Now, when talking about a business, we are not talking of building any walls of any kind (unless you are in the building industry), but rather of thinking big. What will enhance your employees’ passion, and make your organization a huge rally of productive workers will be the ambition and the exciting projects, and hopes you place in your business. If you believe in it, and figure out the right ways to make it happen, most people around you will be aroused by your ideas. They will volunteer to help you out. Remember: everyone wants to be part of a crazy adventure. Your business is yours, and theirs. Make the most of it.

It is widely known that in order to be in power, one must control the resources. This is why multi-billionaires run the world. On a smaller scale, controlling the resources means holding on an important competitive advantage that clearly differentiates you and places your business on an upper level.

If Trump was against the war in Irak, he still is in favor of gathering and keeping a monopoly on the Middle East’s oil. Oil being ISIS’ main resource, it would help in dismantling their organization and keeping the rest of the world safe. Summed up, Trump’s position is: let’s keep the oil, let’s control the terrorists’ resources in order to eliminate them, since we want peace and they want war.

Current society does not function in a matter of who owns what knowledge. People own money, and delegate the competencies. Thanks to the Internet, anyone can now reach almost any information they are seeking for. Therefore, being a monopolist is not about controlling the immediate resource, but rather about managing your own business effectively, in order to be able to argue against the competition. Indeed, you play along the same rules as your competitors, the only oil you possess is your own – you are not able to take your opponent’s.

What you want to do now is have a complete control over the resources you are currently managing. What will make your business great again is not your ability to “kill” your competitors, but your ability to optimize each of your resources and articulate them perfectly with each other in order to maximize your profits. We mostly talked about managing the people, who are an undeniable precious resource, but we could also argue and talk about your products and services’ true and real efficiency and return.

RELATED: Case Study – The Best Job in the World

Whether the promises Trump made in first place are going to be kept or not. Whether he changes his mind along the way or happens to be unable to make for them, these 4 – or maybe 8 – Trump years are expected to be outstanding. In the same way his marketing campaign was, the world population is waiting for the next big move – no matter how outrageous, no matter how dramatic, no matter how smart – it just has to be big.

Make the most out of the current times; make it big too. For we are attending the era of the ruled and the huge: the country is run by a billionaire business person. You might as well start inspiring yourself from all this disturbance, as it seems to work to be bold or even scandalous.