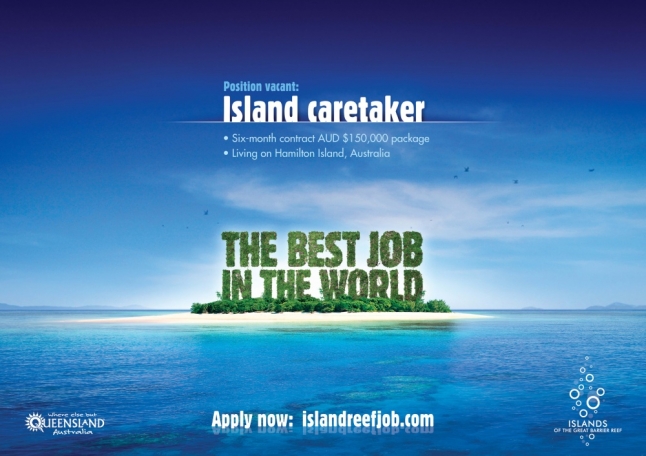 Case Study: The Best Job in the World

Around the world countries, regions, and cities fight for their share of this thirteen-figure total. Of course, a whole lot of this money is generated in and around the major global tourist destinations like London, Paris, and New York City, and rising stars Bangkok, Singapore, and Dubai. Marketing campaigns for these cities can quickly become iconic – consider New York City’s “I ❤ NY” that began back in the 1970s – and suck a lot of the oxygen away from the competition.

If you are a marketer working for a secondary destination and seeking to deliver a serious return on investment, you’re going to have to be pretty creative. Even getting attention in a crowded and noisy market is going to be a challenge, let alone converting that attention into revenue. It’s an uphill battle that has seen many more failures than successes.

It was precisely this difficult environment that Tourism Queensland faced in 2009 when they sat down to imagine a campaign to better promote the Great Barrier Reef as a tourist destination.

Queensland is Australia’s second largest state and located in the tropical north-east of the continent. Known for its white sandy beaches, undisturbed rainforests, and its proximity to the Great Barrier Reef, Queensland would seem to have much in its favour for tourists considering a visit to a beautiful, sunny, and tranquil paradise.

On the downside, however, is Queensland’s relative isolation to the rest of the world, the physical distance between the state and the more popular tourist destinations of Melbourne and Sydney, and the distances between tourist attractions in the state itself. Indeed, Queenslnd encompasses some 1.7 million square kilometres of land, roughly equivalent to the combined size of France, Germany, Spain, and Italy.

In 2009 the world was still reeling from a financial crisis that had seen tourist spending drop significantly as people chose to stay home instead of travel abroad, particularly when that travel was as expensive and time consuming as a trip to Australia.

If Tourism Queensland was going to challenge the world’s most popular tourist destinations for a greater share of the spending pie, and if it was going to see a big return on the marketing investment it would make, they were going to have to shake things up significantly and find a way to reach potential visitors that was truly out of the ordinary.

The Best Job in the World

Tourism Queensland turned to agency SapientNitro who took on the challenge to deliver a global audience with a very limited budget. As SapientNitro described the job before them:

Call it a ponderous challenge. We were asked to create international awareness for the Islands of the Great Barrier Reef – on a drop in the bucket budget. How could we get the world’s attention with that?

The key insight we uncovered was that people don’t truly experience something unless they immerse themselves in it. And in terms of Queensland’s Islands of the Great Barrier Reef, a little-known slice of tropical paradise, the only way we could immerse people was to have them live there…or at least fantasise about living there.

SapientNitro convinced Tourism Queensland to advertise for the position of ‘Island Caretaker’ in classified advertisements around the world. The job would require no experience, demand only a single blog post to be written each week, offer free accommodation on one of the islands on the Reef, and pay a six figure salary. The caretaker job was dubbed ‘The Best Job in the World’ and, to apply, candidates would need to produce and upload a 60 second video to the website www.islandreefjob.com and wait to (hopefully) be selected.

SapientNitro hoped that there would be real interest in the position.

The interest was immediate, global, and overwhelming, and it stands as a case study in getting online marketing right.

As SapientNitro reports, within six weeks of launching the promotion more than 34,000 applications had been received from nearly 200 countries. The website drew more than 6.8 million unique monthly visitors with nearly 54 million page views and an astounding average time on site of 8.25 minutes. More than 46,000 mainstream media stories and 230,000 blog posts referred to the promotion reaching an estimated 3 billion people and earning more than $260 million in media value. Great Britain’s BBC would film a documentary about the promotion attracting more than 4 million viewers, and nearly half a million online votes were tallied in selecting the person who would take on the Island Caretaker’s role.

And all of this on the back of what remains a relatively small $1.2 million budget.

How Tourism Queensland Cut Through The Noise

Tourism Queensland and SapientNitro managed to find a global audience for their The Best Job in the World campaign by getting three things right.

First, they took their campaign online.

These days million dollars isn’t going to buy a lot of TV time anywhere. But a million dollars invested in a largely online promotion buys a whole lot, indeed. It makes going global easier, and an English language promotion can reach billions of native and second-langauge speakers with relative ease. Provided that the website is capable of handling the traffic – and early on the Tourism Queensland site did struggle with loads – the online audience is effectively unlimited.

Second, they got the crowd to provide most of the content.

The real draw of the campaign were the application videos submitted by tens of thousands of people from around the world. None of these were created by the team at SapientNitro or the client, Tourism Queensland, either. More than 550 hours of video was uploaded to the site and these videos kept visitors on the site for a very long time. By outsourcing to the crowd Tourism Queensland was able to generate masses of content and drive the popularity of the promotion well after launch date.

Of course, if you want to reach a lot of people you can buy media spots in the markets with the greatest number of people. If you’re searching for more bang for your tourism marketing buck, you can look for areas with the greatest concentration of potential customers. But if you want to reach the most people most cost efficiently you’ll need to focus on earning free media coverage – and that takes creativity. SalientNitro and Tourism Queensland were able to earn hundreds of millions of media value on the back of their creative promotion, something that they would never have been able to afford on the budget they had.

The Best Job in the World managed a return on investment that few tourism promotions have had before or since. It deserved the dozens of awards it received around the world, including 8 Cannes Lions, and stands as a prime example of leveraging creativity online for tremendous positive returns.