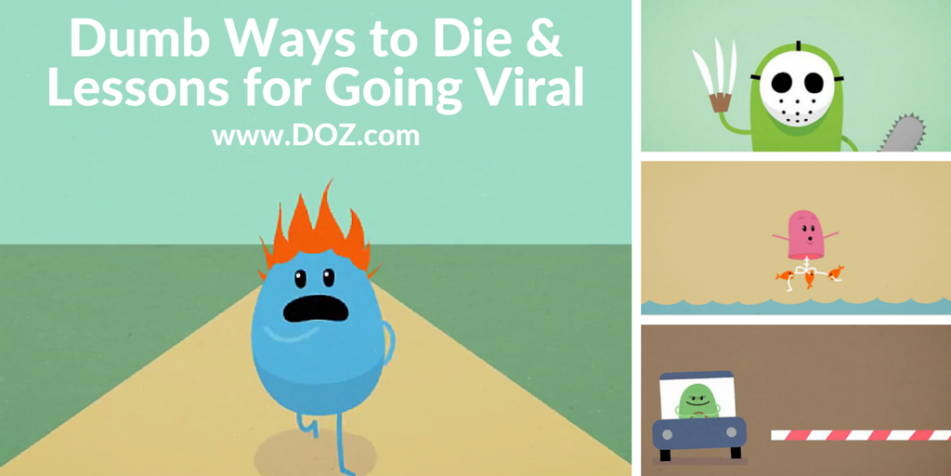 Dumb Ways to Die and Lessons for Going Viral

Every year the world’s advertising agencies gather by the water in Cannes, France for the Cannes Lions. This award ceremony recognizes excellence in advertising around the world, whether it is online or in print, on television or radio, outdoor or on social media. Agencies compete to win the prestigious Lions, with the Gold Lions reserved for the very best of the best.

If an agency can leave Cannes with one Lion they will be happy. More than one? Ecstatic. And a Gold Lion? That’s money in the bank in an industry where creativity, talent, and effectiveness need to be proved to clients. A Gold Lion speaks volumes about the quality of an agencies work on a campaign, and the accolades that follow the award of a Gold Lion are well-deserved.

In June 2013 the agency behind one campaign for a local transport company walked away from Cannes with 18 Gold Lions, 3 Silver Lions, 2 Bronze Lions, 5 Grand Prix awards, and the overall Integrated Grand Prix.

It was the most successful and most awarded campaign in the history of the Cannes festival.

And in this post we’ll analyze that viral marketing case study Dumb Ways to Die.

When it comes to clients there are some agencies that seek out the newest, sexiest, and hottest young companies. If the brand story is still being developed and if there is room to craft a truly original message then its an attractive proposition for any agency.

There are other agencies who’ll seek the high profile that comes with a big client. The prestige that is brought to an agency by landing a ‘whale’ client can help in winning smaller accounts, as well as giving the agency an income boost with a big-spending corporation.

But in between the sexy but new and the large and prestigious are most of the other clients. They aren’t necessarily exciting, but that doesn’t mean that the campaign that is launched needs to be boring. Indeed, if the same creativity that is deployed for an exiting startup or an established global brand is applied to a lower-profile client, great things can happen.

As they did when Metro Trains signed the McCann agency to educate about the dangers of trains, level crossings, and station platforms, especially for younger people.

McCann could have taken an unoriginal approach and rolled out a typical safety campaign. School visits, new signage on platforms, a scary TV advertisement or two, and maybe even a celebrity spokesperson. It might have been effective, but it wouldn’t have been all that creative. Metro Trains might have reached their goals of educating young people about the dangers of trains, but it wouldn’t hold the attention of that easily-distracted audience for very long.

So McCann came up with a different strategy. They began by defining a simple truth about accidents that involve human and trains:

Trains travel in a straight line. If you get hit by a train, you’ve probably done something wrong which makes getting hit by a train one of the dumbest ways to die.

Rather than a typically earnest public service announcement, McCann opted for a mix of offbeat humour, a catchy tune and a collection of amiable animated characters to launch our message as an online music video under the compelling title Dumb Ways to Die.

That video would become the centerpiece of the Metro Trains campaign.

The Dumb Ways to Die Campaign

Parent agency InterPublic explains steps in the launch of the campaign like this.

First, McCann Melbourne created a music video that was funny, irreverent and that featured a very catchy theme song, designed to inspire sharing.

If you’ve never seen the video – and that is unlikely as it remains one of the most shared videos of all time – take a look:

After creating the video, the next step was getting the word out. InterPublic explains that McCann:

…leaked the campaign to a trusted journalist to seed a positive story idea: that McCann is pushing boundaries rather than sticking to tired, safe formulas. The press release was issued in Australia, Asia Pacific and global creative distribution on Friday, November 16, 2012.

A simple res release was all that was used by McCann to launch this winning campaign. If this seems limited for a campaign that would reach hundreds of millions of viewers online and eventually sweep the Cannes Lions awards, it is because McCann was thinking like a digital marketer, and not a traditional marketing agency.

Online communication and advertising is popular when it is found, shared, and authentically endorsed by individuals. It almost always fails when the only people talking about it are the people who built it.

The agency understood that early adopters would be key to success, so we amplified shareability by creating .gifs from the video animation and shared them via Tumblr. The creatives believe this was the main reason DWTD made Reddit’s front page over the launch weekend. After writing the first comment on the YouTube video, which provided the links to buy the song on iTunes or listen/download via Soundcloud, McCann Melbourne resisted the usual temptation to talk about the campaign in the media, on its social media channels, or through its press relations. The agency did not engage in the online commentary in any way and have continued to be entirely non-interventional. This freedom has allowed people to create multiple translations that have facilitated growth throughout Asia, Europe and South America.

In short, McCann and Metro Trains did not promote the campaign but relied on social channels to take it viral.

Tumblr was the first place where the campaign gained traction, and the social blogging platform made it easy to share the GIFs extracted from the advertisement. Tumblr users can share, reblog and like posts on other blogs with just a click, and the platform skews young. This made Tumblr a smart place to sow the seeds of a viral campaign.

Making reddit’s front page within a couple of days of the advertising launch was also a major driver in the success of the campaign. The traffic that would be driven from reddit to the video on YouTube and the posting and reposting of Dumb Ways to Die GIFs on the site only increased knowledge of the campaign. This online attention then translated into mainstream media attention as the traditional media realized a viral hit was emerging from a small corner of Australia.

The video would be viewed by tens of millions within the first weeks of its release, and McCann’s willingness to allow users to remix and parody the original advertisement drove the virility further. By taking a hands off approach, the sharing was entirely authentic and the video spread like wildfire across the net.

After the launch of the advertisement came the launch of the game. Built for iOS and Android, the Dumb Ways to Die game rose to the top of app stores around the world. Now a global phenomenon, the campaign was no longer only speaking to young people in Melbourne, Australia, but to a world that had become enamored by the quirky, not-so-smart characters who found more and more unusual – and dumb – ways to die.

The song behind the advertising topped sales charts and digital download charts across the world, and McCann would eventually release a suite of plush toys for the many young fans that now felt that the Dumb Ways to Die characters were as familiar as the Minions, the Muppets, or Sesame Street characters.

But best of all, the campaign achieved its aims: millions of people were now more aware of the danger of trains and how ‘dumb’ it was to die by falling around on a train platform of near the train tracks.

Learning From ‘Dumb Ways to Die’

For digital marketers there are three major takeaways about going viral from the Dumb Ways to Die campaign.

The strategy that the agency took to take the advertisement viral was entirely authentic. By letting the campaign and the people viewing the campaign spread the word, the campaigns popularity was entirely authentic. As was noted, the sole social media comment made by the agency on launching the campaign was on YouTube, and was nothing more than a link to the ad’s song on iTunes and Soundcloud. If you are a brand seeking to gain viral success, don’t be suckered into the astroturfing that some agencies offer or the ‘buy 10,000 likes’ that are anything but real. Strive for authenticity and know that your viral campaign is truly viral.

As McCann admits, it could have gone with a stock-standard public service announcement and thus continued the long tradition of PSAs that are effective but hardly exciting. Instead, the McCann team harnessed their creativity and asked the sorts of questions that would eventually mean that train safety is associated with a piranha attack on a cartoon character’s private parts. Not only did this prove incredibly effective, it represents the sort of out of the box thinking that only a truly creative approach can develop. If you are looking to take an advertisement viral then doing things the same way everyone else has or offering only what is expected is not the way to do it.

The agency understood that there was no single social media channel that would deliver the virility that they sought. A hit on Tumblr would not be a global phenomenon, nor would a simple reddit post make it something that would end up iPhone screens on every continent, and MP3 players across the world. By offering a means for the content to be shared as a video, as a GIF, as a game, as a song, and eventually as a plush toy, McCann was able to hit multiple channels all at once. There was no single social network that could contain all of the content, and its portability and adaptability to any social channel meant improved social sharing from day one.

Dumb Ways to Die is one of the most successful digital marketing campaigns of all time. It took a local, un-sexy public service announcement brief and built a global viral hit. Digital marketers can learn from the McCann campaign and, by focusing on their own authenticity, creativity, and adaptability, can ensure they are well placed to reach their own viral marketing goals.

4 Reasons Twitter Is The Right Place for Your Career