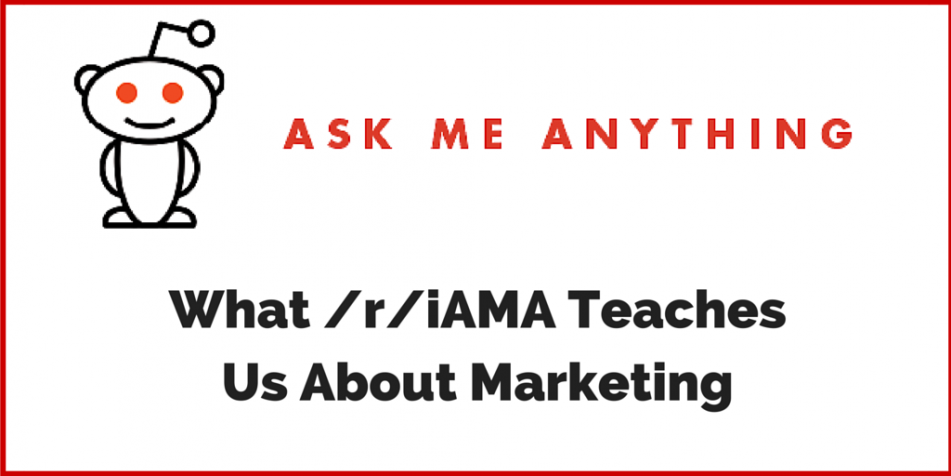 [Infographic] What /r/iAMA Teaches Us About Marketing

Anyone who spends any sort of time online will have heard of reddit.

The community-centered social-sharing site enjoys some of the highest daily traffic of any website in the world, and a link that makes the reddit front page is likely to attract hundreds of thousands, if not millions of clicks.

It’s little surprise, then, that reddit has become popular amongst marketers. After all, for no up-front investment a marketer might be able to generate traffic for their client that rivals the most expensive Google AdWords campaigns or paid social media marketing efforts.

But there’s a catch.

Reddit and its user base is notoriously attuned to marketing efforts. If a story or a link has even the hint of being backed by a corporate PR firm or if there is even if the whiff of a deliberate promotional strategy suggested in a title or an image then it will be quickly downvoted, denounced, and driven from the eyes of potential readers.

Marketing on reddit is therefore very difficult. At its heart reddit considers itself a community of users, not a collection of consumers. Cutting through with a marketing message is tough and has proved impossible for many businesses in the past.

However, the difficulties that marketers face in promoting products and services on reddit need not dissuade marketers from engaging on the platform altogether. Indeed, there is at least one part of reddit where marketers can cut through and speak directly to redditors without being accused of self-promotion because, in one sense, it’s a part of reddit that is all about self-promotion.

Here’s how they describe themselves in their FAQ:

Basically, /r/IAmA is a place to interview people, but in a new way. “IAmA” is the traditional way of beginning the description of who you are; “AMA” is the traditional way of ending the description; the acronym means “Ask me anything.” The interviewee begins the process by starting a post, describing who they are and what they do. Then, commenters leave questions and can vote on other questions according to which they would like to see answered. The interviewee then goes through and responds to any questions that he/she would like, and in any way that he/she prefers.

/r/iAMA is among the most popular of reddit’s subreddits with in excess of 8 million subscribers. The subreddit has its own mobile application and attracts some of the biggest names in business, science, music, television, and Hollywood every week. In just the last week /r/iAMA has welcomed actor Sir Patrick Stewart and guitarist Steve Vai, and in the week ahead will host AMA’s with YouTube stars from the FailArmy Team, Wikipedia founder Jimmy Wales, and candidate for the 2016 Democratic presidential nomination Laurence Lessig.

With such a massive subscriber base threads from /r/iAMA regularly get upvoted to reddit’s front page and attract a readership measured in the hundreds of thousands. For celebrities, business leaders, and activists this presents an incredible opportunity to market themselves and their ideas on reddit, but it does raise the question as to how to do this effectively.

Let us explain exactly that.

Across May and June Udemy looked at the top 50 /r/iAMA AMA’s and found some striking similarities between the most successful interactions between individuals and the /r/iAMA community. Among the take aways:

Based on these commonalities, Udemy concludes that marketers hoping to take advantage of an appearance on /r/iAMA need to:

What’s more, though, marketers can build engagement even after their AMA is complete.

As Udemy demonstrate, by responding to comments even after the AMA is officially over, answering emails from redditors, engaging with redditors on social media (especially by favoriting or retweeting their comments on Twitter), and producing content that specifically references the AMA individuals and brands can drive engagement long after they leave the /r/iAMA subreddit.

The lesson for marketers?

Engagement and outreach is not a one-time effort.

Taking the time to complete an AMA on reddit should not be the end of engagement efforts directed at reddit’s enormous community. Instead, follow-up efforts on other subreddits, on social media, and in traditional media can increase reach and drive positive impacts for the brand or individual.

Udemy and DOZ have teamed up to deliver this exclusive infographic, What Reddit AMAs Teach Us About Marketing. Check it out below or download it, and share.

Have you had success marketing on reddit? Let us know how you achieved this success in comments below or on Twitter!