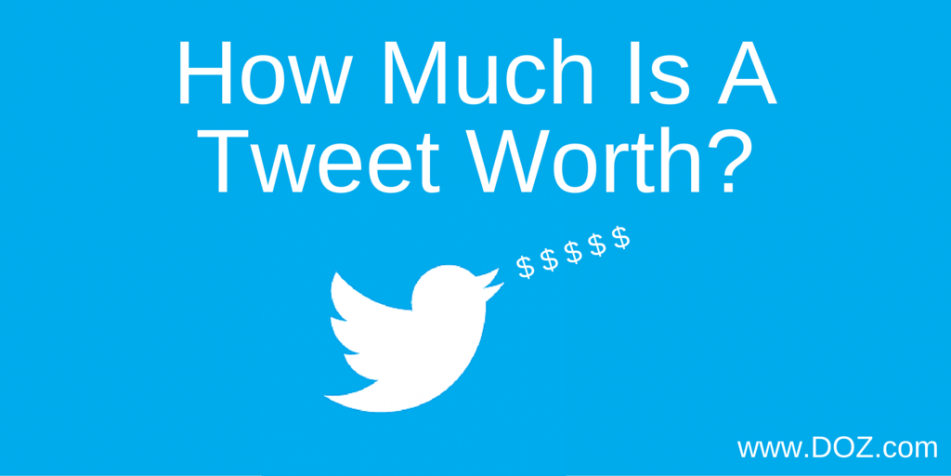 Sometimes it is a photo I took, sometimes it’s retweeting an article from here on the DOZ blog or something I’ve written elsewhere, and sometimes it’s a news story that I think is worth sharing with my meagre number of followers.

I have a couple of IFTTT recipes set up to retweet posts on Instagram automatically and to tweet out a link to anything that I pull into a certain Evernote notebook, too. I keep an eye on my mentions, enjoy conversations and debates on Twitter, and follow some of the more interesting sporting and political events on the platform.

All that suggests I am pretty au fait with Twitter, with tweeting, and with finding my way around the app.

But one thing I’ve never been able to lock down is just what my tweets are worth.

And how much money?

The answer to that question really depends on three factors:

Reach is about how many people are going to see something that you tweet. As a rough estimate you can assume that your reach is your follower count – in my case, 180. That’s not to say that you won’t reach more people with a tweet that that. A few times a month I’ll reach thousands of people with a single tweet when a well-connected follower retweets something of mine, and then someone else retweets it, too. My reach in such cases quickly jumps from a hypothetical 180 to the two, three, even five-thousand-person level.

Another note, though: your follower count is no guarantee that all of these people will read your tweet. Of the 180 people who follow me there are likely some who have me muted, and others who scroll right past my tweet without reading it, let alone engaging with it. As a proxy, though, it’s a useful number to get started with, and the bigger the number, the better the potential reach.

Resonance is about tweeting something worthwhile to your followers, something that they’ll appreciate and that – here’s the term – resonates with them. If your followers are susceptible to puppy pictures or cat videos then your tweets need to be on this topic in order to encourage interactions and engagements. And in the end, engagement is what resonance is all about.

Twitter says that resonance measures “hashtags, clicks on hashtags, retweets, retweets by power users” and other metrics. The score can be measured in real time and is the metric that the company uses internally to determine which promoted tweets to display. Reports Twitter, the promoted tweets that resonate with users will stay in search results, while tweets that don’t resonate with users disappear.

Relevance is tied to resonance but is a measure of how closely the interests of the tweet aligns with the interests of the audience reached. This is an important distinction to make as while reach might be incredible (think of a celebrity, for example) the relevance of what is tweeted might not be high (for example, the celebrity tweets a poor mix of personal and professional news, or retweets crackpot pseudo science).

Pulling these three measures together allows for a Twitter user to put a price on their tweets. Companies can then use the platform of the Twitter user to promote their wares to the audience that the user has built – in exchange for cash, of course.

But how much cash are we talking?

Webfluential decided to test the worth of a tweet by people whose reach varied from 2,000 followers to 16,000 followers. For each case they determined how many tweets a user would have to send in order to afford a typical part of the American lifestyle, including:

The results were not surprising, at least as far as reach was concerned: the larger the reach, the fewer tweets required to pay for things.

For example, a Twitter user with 16,000 followers needs to tweet only half a dozen times to earn enough to make their car payments that month. A Twitter user with a reach of just 2,000, on the other hand, needs to tweet almost as many times to earn enough to buy a tank of gas – and five times more to be able to afford the payments for the car they are fuelling!

Webfluential pulled all of their data into the infographic below – check it out to see what tweets are worth, and to speculate on how often you’d have to tweet to keep yourself rolling in the USA!