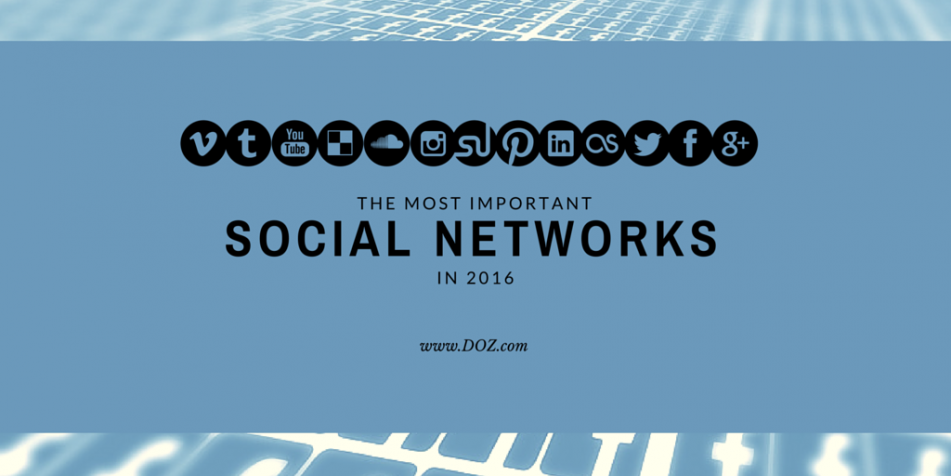 The Most Important Social Networks in 2016 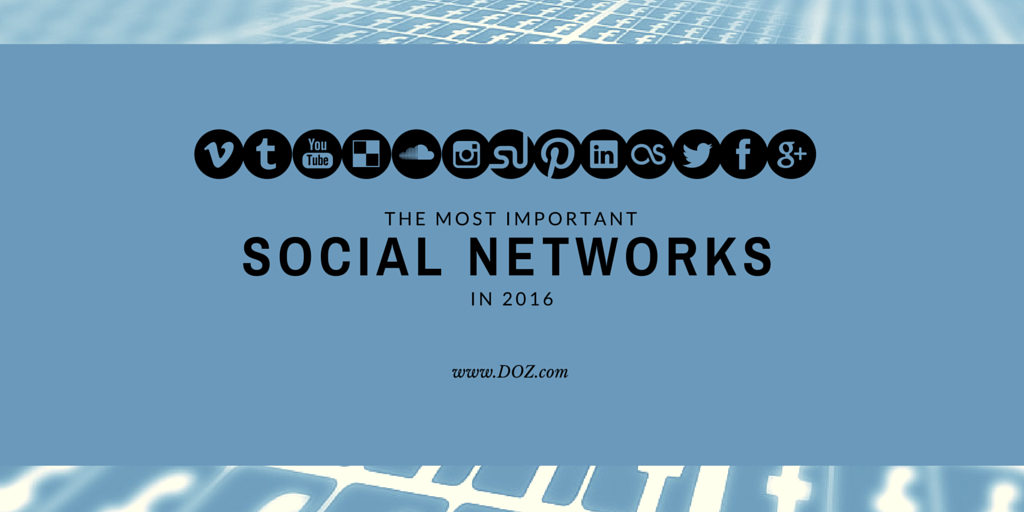 The social media market is increasingly crowded and complex.

There are the major players, of course, the ones that you probably keep on the home screen of your smartphone and your friends and family expect you to use. There are the second tier networks that still have hundreds of millions of active users but a more of a niche appeal. And there are even the activity-specific networks that might have a relatively small user base but an incredibly focused one, and that can be very valuable for advertisers.

For businesses seeking to expand their reach online, attract new customers, and convert more of their traffic into sales, marketing on social media is today an obvious avenue to pursue.

But what channels and networks deserve the most attention? What social networks command the largest audiences, and are there avenues to reach that audience effectively? And if you had to choose just five of the dozens of social networks on which to focus your efforts, which should they be?

Here is our guide to the most important social networks in 2016.

Ask someone to name a social network and they’ll rattle off a couple that everyone has heard of.

But there is a lot more noise in the social space than just the major networks. In fact, there are dozens of social networks ranging from the incredibly huge – the billion-plus users on Facebook – through to the specialized niche, think the academics who trade peer-reviewed papers on Academia.edu.

If you are getting social in Iran you’re probably on Cloob. If you are a mommy blogger you’ll probably be on CafeMom. Christians hang out on Cross.tv, Muslims on MyMFB, and Jews have Schtik.

Almost every one accepts advertising and almost every one could potentially be home to your next customer, but it’s close to impossible to target all of them at once. Even the brands with the biggest budgets in the business world don’t try and play every social channel at the same time – and the reason is simple.

The more you spread your social media spend, the less effective that spend is going to be.

In other words, you need to choose your channels.

So which ones do you choose?

The biggest social networks are big because they appeal to a wide swathe of the general public. If one in five people on Earth visit a site or enter an app every month, there’s a good chance that your customers are among them.

The four biggest social networks are the ones that most every business should maintain an active presence on, and they are:

More than a billion users, integrations on hundreds of thousands of unrelated websites, and the go-to social network for everyone from Millennials to Boomers. Set up your page, get it verified, and update often.

Google’s attempt to take on Facebook which rivals the blue-buttoned giant for users, but misses on activity. Lots of B2B businesses find that Google+ is effective for reaching customers, though B2C reports less efficacy.

It’s immediate, it’s got more than 300 million users, and it’s a new channel for customer service in the twenty-first century. Get with the hashtags, the mentions, and the retweets to reach out to connected customers.

It’s social networking for professionals. Yes, the network emails you more than a worried parent, but the opportunities to reach out and connect with the decision makers and purse-string holders is unmatched.

As well as concentrating on the Big Four there are also opportunities to reach out to customers on some of the smaller networks. You’ll want to choose when and where to spend time and money on these networks, but for the right business they can pay off with increased traffic and revenue streams.

There are 300 million Instagram users out there just ready to like your images – but if your business is not ‘image-friendly’ it’s not the place for you. Fashion and consumer products? Perfect. B2B? Things can get difficult.

If you’re going after suburban females with disposable income, then Pinterest is for you. Its focused on consumers, skews overwhelmingly to women, and B2B businesses are going to have trouble gaining traction.

If you’ve never heard of VK then there’s a good chance that you aren’t doing business in Russia and the former USSR. If you are, then VK is the Eastern European and CIS equivalent to Facebook, with all of the reach you’d expect of a regional market leader.

Another avenue to consider for social media, and especially in light of the trends we’ve written about for 2016, streaming video channels are worth considering, too. Not only do they provide the real-time reach that businesses seek, the engagement they promote is immediate and significant, too.

Among the streaming video social networks to consider investing some creative juice in are:

The Twitter-backed app overcame early competition with first-to-market Meerkat and even spawned it’s own noun: Scope, as in, “to scope”. It’s simple to use, requires only a smartphone, and stores video for 24 hours.

It’s Periscope but done Facebook style. Unlike Periscope, videos are saved to the Facebook user’s page, and this makes them both real-time channels for interaction and engagement and longer term investments in content creation.

It’s Periscope but with a two-way twist. You aren’t just broadcasting with Blab, you are communicating. If your audience reacts and wants to join the conversation, you can enable that and win by engaging with questions and comments in real time.

No post can really go into any detail about the multitude of niche social networks out there. There are just so many with their own interests and communities – and their own opportunities for targeting users with advertising and content marketing.

But when it comes to the primary networks, the most important channels, and the social media spaces that cannot be ignored, there are four: Facebook, Google+, Twitter, and LinkedIn. In addition, if it makes business sense, Instagram, Pinterest, and VK might be considered. And, for businesses where engagement with consumers is key, then the streaming social video channels like Facebook Live, Periscope, and Blab should be embraced, too.

Are you on all of the Big Four? What other social networks does your business use regularly? Let us know on Twitter!