‘ Brexit ‘ and the Impact on the Insolvency of Technology Firms 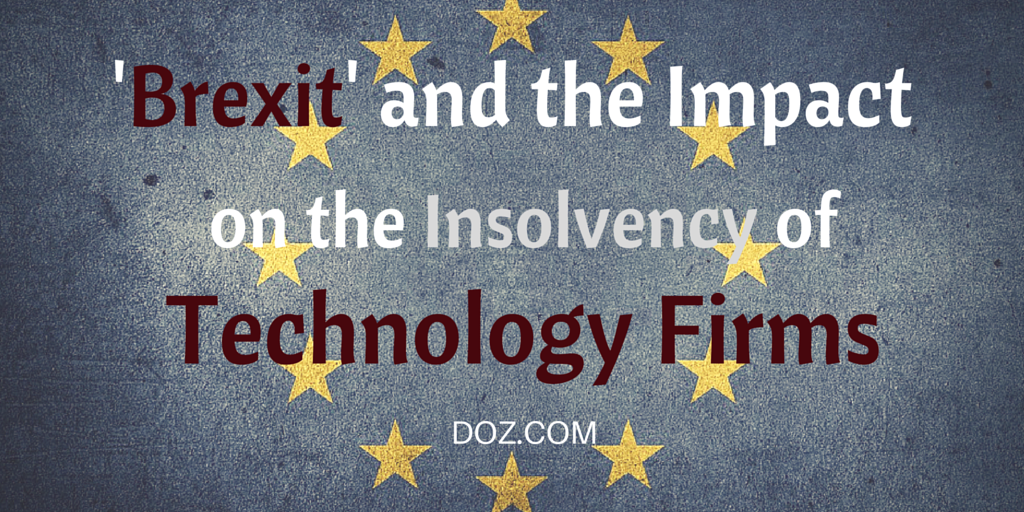 This is a guest post by Mike Smith. He is the Managing Director at Jameson Smith & Co Ltd; a firm of insolvency consultants within the UK providing services nationwide. Feel free to follow him on LinkedIn, or the company on Twitter and Facebook.

In this article we’re going to take a look at the anticipated and real impact of the shock ‘Brexit’ vote on the technology industry. The technology industry is notoriously high risk, with failure rates to challenge any in the business world. As insolvency experts, we’re going to take a look at how the vote to leave the EU could push UK tech businesses and their workers ever closer to the edge…

The technology industry is one that is plagued by high rates of insolvency. The industry is inherently high risk, and as such, the threat of failure constantly simmers under the surface of the exuberant and fast paced startups and SMEs.

Such is the level of failure, estimated at nine out of every 10 tech startups, that in Silicon Valley, mantras like “fail fast, fail often’ are recited at conferences and pinned to company walls. In this industry, it seems celebrating failure is very much part of the culture.

While failure is enshrined as a rite of passage in Silicon Valley and tech hubs around the world such as Silicon Roundabout and Tech City in London, the ultimate aim is success. Success in the technology industry can be extremely dramatic if companies like Airbnb and Uber are anything to go by. But with the chances of success so slim, even the smallest macroeconomic change can tip the odds even further in the favor of failure.

The UK’s vote to leave the EU was one few people were expecting. The polls said the UK would vote to ‘Remain’ as did the financial markets. Ultimately, as the results came trickling in, it soon became clear that the UK had spoken, and 52 percent of its citizens no longer wanted to be part of the European Union.

The forecasts for British businesses if the Leave campaign was to win had been grim. There were stark warnings of stalling economic growth and even recession. Businesses would look to leave the UK in their droves and inward investment would be down. For an industry that already relied on the smallest of margins, ‘Brexit’ could push businesses closer to the brink and lead to the insolvency of technology firms across the UK.

Why ‘Brexit’ is bad for Tech companies

Before the ‘Brexit’ vote, a poll had been taken in the UK tech sector with 90 percent of the respondents opposed to leaving the EU. But what challenges did these technology professionals foresee if the Leave campaign was successful?

Typically, those working at tech startups are a highly educated bunch with a maths and science-based skill set that can be hard to find. To bridge this gap in skills, tech firms regularly employ EU nationals with the talent they need. While there will be no immediate impact on these workers, there are no guarantees that restrictions will not be placed on EU workers living in the UK in the future.

Most legal experts believe the decision to leave the EU will add barriers to immigration and recruiting which could make it more difficult for UK businesses to find the talent they need. The result: an inevitable increase in the insolvency of technology firms, or, a mass migration of UK tech firms to EU countries.

The UK’s large community of tech startups, located predominantly in East London, receives funding from venture capitalists to help many of them get off the ground. This ready availability of funding also attracts many EU tech startups to the capital in search of the backing they need.

The worry is that these funds could now be under threat. In an interview with the Financial Times in 2015, Jon Moulton, founder of the largest investor in UK venture capital firms, suggested the fund “would probably stop investing in the UK” if Britain left the EU. The result would be a funding black hole that could lead to an increase in the insolvency of technology firms.

Trade deals are not something that can be arranged overnight. A new deal with the EU is expected to take years to agree, with even the Leave campaign anticipating a wait until at least 2020 to get a deal in place. Once a deal has been made, new rules will apply that make UK exporters subject to EU import tariffs. The UK will also have to renegotiate the 50+ deals it currently has in place with countries outside of the EU.

This means that trade within the EU zone is likely to be impacted over the coming years. Leave campaigners have suggested the UK government should compensate firms for the additional EU trade tariffs put in place, but we will have to wait to see whether such steps are taken.

UK firms, including a high proportion of technology companies, made an estimated net gain of £300million from EU research grants every year between 2007 and 2013. Tech firms that once relied on this capital injection will have to find another way to make up the shortfall.

Again, there are hopes that the UK government will step in to bridge the gap, but if not, the result could be a fall in research and development spend. This is the kind of innovation that enables firms to diversify and create new income streams. Without this extra income, some tech firms could be pushed closer to insolvency.

The decision to leave the EU has also raised questions about how tech firms should handle data from UK firms and citizens. Questions about how data can be processed and where it should be stored were being answered as part of a new deal being negotiated by the EU, but now the UK’s involvement in this deal has clearly been brought into question.

Although tech firms operating out of the UK will be bound by the EU rules for the foreseeable future, there is uncertainty about the impact of the ‘Brexit’ vote in the longer term. Companies operating out of the UK will not want to see new rules which prevent the free movement of data between the UK and EU countries. Any legislation that does inhibit cross-border data flow could impact on the innovation that drives tech businesses, and ultimately protects many from insolvency.

The looming sense of uncertainty

Clearly, there are a number of factors related to the UK’s decision to leave the EU that could have a detrimental impact on the insolvency rates of technology firms. In an industry so prone to, and even welcoming of failure, it does not take much to tip the balance away from startups. At the moment, it is still very much a waiting game to see what the true impact of ‘Brexit’ will be, but until the picture becomes clearer, it is the looming sense of uncertainty that could have the most damaging effect of all.