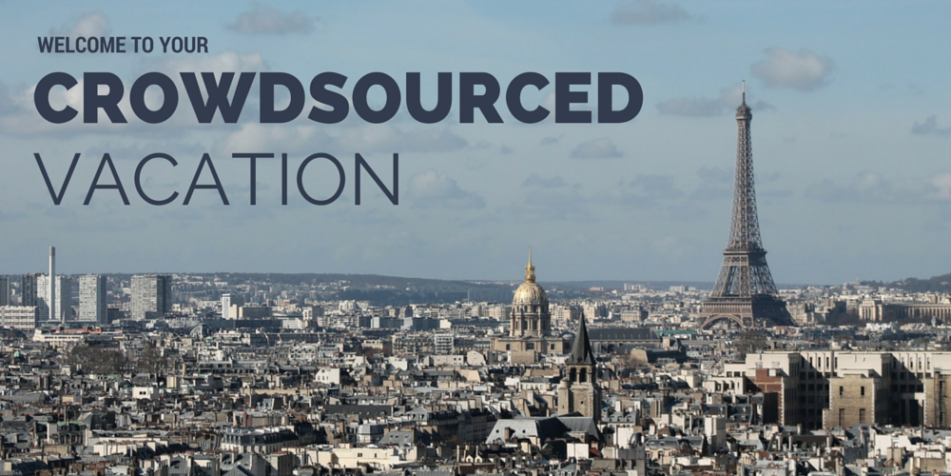 How Crowdsourcing Changed the Way We Travel

Let me tell you about the vacation I took just a few weeks ago.

It started, well, a few months before I climbed on the airplane. I had some vacation time coming up and I spent a couple of lunch breaks and a few evenings trawling Trip Advisor for ideas on where to go. I had about ten days to spare and I wanted my trip to be memorable, exciting, and lots of fun. After clicking and reading the experiences of others everywhere from Helsinki to Porto, I settled on France.

I caught a ride to JFK with Lyft, slept most of the way to Paris, and then picked up an Uber to take me to the apartment I had rented for the first three days of my trip – thanks, Airbnb. Sleeping on the plane helped me fight the jet lag and the City of Lights did the rest. Eiffel Tower? Check. Louvre? Check. Montmartre, the Left Bank, paying far too much for far too little coffee on the Champs-Elysee? Check, check, and check.

After a couple of days wandering the streets and seeing the sights, I headed south to the city of Lyon. Sure, I could have sprung for the $100 train ticket, but I arranged to travel the highway to France’s second city via BlaBlaCar, a French ride sharing service. I saved $50 and practiced my French with Nicolas and Clementine.

After a couple of hours on the road I arrived in Lyon, found my new Airbnb crash pad, and hit the city looking for a place to have dinner. Yelp was my savior here: I plugged in my location, a price range, and – voila! – I headed straight to the Yabio burger bar for a taste of home (hey – I gotta get my burger on sometimes, OK?).

Yelp helped again the next day but, by day three, I was ready to try something a little different. I turned to Cookening, a site that connects travelers with locals who will welcome them to their homes and cook for them, in exchange for a fee, of course. Thibault and Eric were great hosts and the meal (and the wine) was unforgettable.

Sadly, my trip in France was coming to an end. I ‘BlaBlaCar-ed it’ back to Paris, Uber-ed out to the airport, and flew home – my French adventure was officially over.

Travel in the Time of the Crowd

It wasn’t until I got back stateside that I realized just how different this experience was compared to taking the same trip just a few years before.

Crowdsourcing has changed the way people travel in a number of ways. The most obvious example is logistics; the rise of services like AirBnB, Uber, and what has been dubbed the “sharing economy” turned what had been primarily a mass-produced transactional experience into a peer-to-peer economic network.

Whereas in decades past a traveler relied on known brands to provide reliable, consistent experiences (taxis, hotels), these days they are just as likely to tap into the marketplace that one of those brands facilitates (Uber, AirBnB), and enjoy a more unique experience. The traveler’s ritual has remained quite the same; only the service providers (and the service provided, to an extent) have changed. Rather than the traditional taxi to the airport, flight to a destination and taxi to the hotel pattern, a traveler these days is more likely to take an Uber (or Lyft) to the airport, fly to their destination, hop into another crowd-sourced vehicle, and head to the apartment they booked on AirBnB.

Additionally, whereas in the past someone new to a city might rely on their hotel’s concierge for dinner recommendations, these days they are just as likely (whether staying in a hotel or a rented apartment) to ask Yelp, or even their AirBnB hosts, for ideas.

The only marketplace that hasn’t changed much is the actual act of traveling a certain distance. Is AirUber coming soon?

The Long History of Crowdsourcing

The sharing economy is a fairly new label, but mankind has been “crowdsourcing” for millenia. “Crowdsourcing” is a fairly new term to describe what is, in some contexts, an old concept. It used to be called opening one’s hearth (and heart), giving a passing stranger a meal and a warm place to sleep (nevermind that the fables told it was a test from the gods, let’s just believe in altruism for a while).

In mid-century America, hitchhiking is a great example of an early “sharing economy” practice. There was no financial transaction, usually, but stories from college student heading home on break or a soldier on leave could certainly be payment enough. More recently, one of the first examples of a crowdsourced traveling service in the digital age is the Couchsurfing service. Taking off in the 2000s, it offered a social network and (free) marketplace where folks could offer up their couch to someone traveling through their city. It’s a free service, but with an implied economic incentive – surfers typically donate dinner or drinks to their host. In that way, it’s a fairly clear predecessor to AirBnB.

The rise of the crowdsourcing and the sharing economy has changed the way many people travel – platforms like AirBnB and Uber have driven down costs by increasing the number of potential beds and seats on the market. Travelers who take advantage of such services also benefit from increased variety and personalization in their travel options. At this point, most people I know rented a place on AirBnB, and even more have used a crowdsourced ridesharing service.