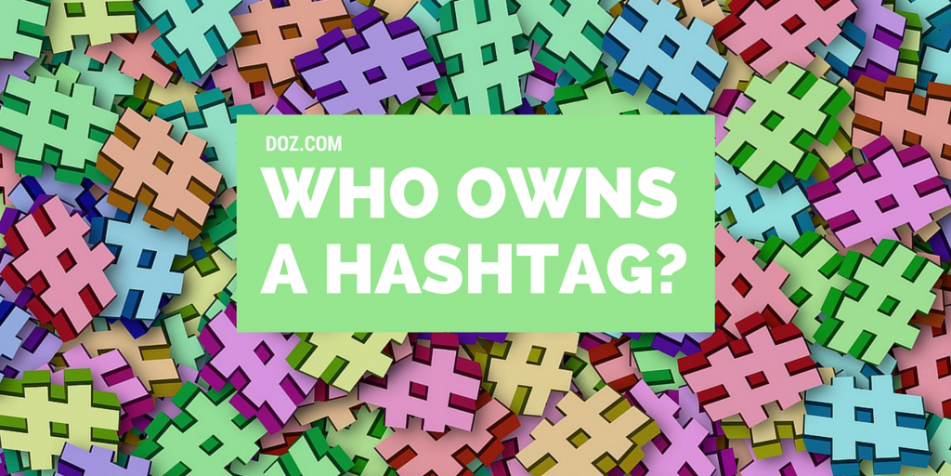 Who Owns a Hashtag? 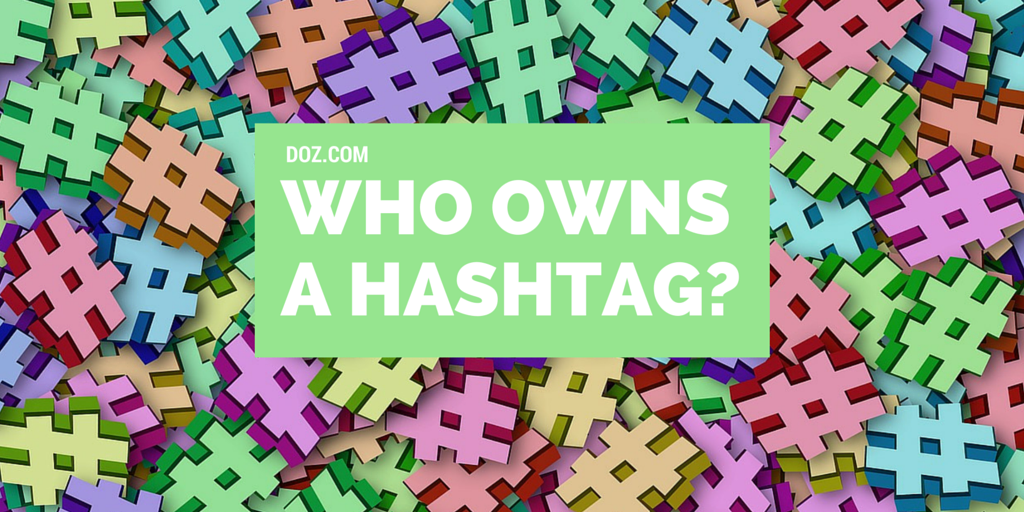 We’ve written a lot about effectively using hashtags on the DOZ blog before.

We’ve explained that hashtags can help categorize a social media post, can help you reach out to interested audiences, and help you ride the great social media wave of popularity that viral events offer to digital marketers.

But one thing we’ve never covered before is who owns a hashtag.

Your first response might be, “nobody owns a hashtag”. After all, the only real use of a hashtag is getting other people to spread it far and wide and a price tag attached to a hashtag is only going to mean it gets spread nowhere. And anyway, who can really own a hashtag like #Election2016 or #ReplaceAWordWithPuppy? It’s generic, it’s made to be reproduced without payment, like language.

But you might also respond, “the person who created it”. There’s a case to be made that creating a hashtag that goes viral is as much a creative work as a movie, a book, an article, or a song. It might be made to be shared – music is made to be played out loud, after all – but it is also the creation of a single person and that person is the owner, right?

While it is true that #Election2016 is going to be hard to ‘own’ in the traditional sense, it’s a little different when it comes to #Microsoft, #KFC, or #ImLovinIt. These are hashtags that represent established brands and, just as it would be unlawful to use the Microsoft logo or McDonald’s slogan without permission, could it be that hashtags are also offered some legal protection?

In this post we’ll lay out the current conversation around hashtags, copyright laws, and intellectual property, and answer once and for all: who owns a hashtag? To better understand the legal implications of law violations, here is a great post to read.

Just a few years ago the idea that you might copyright a hashtag would have seemed laughable. A hashtag, for the most part, was the emergent labelling that came directly from social media users. Companies could benefit from a hashtag that cited them, or they might be attacked by a hashtag calling them out for some corporate misdeed, but it was something generated by users and not by corporations.

This would change, though, and now every company, event, product, and day of the week has its own hashtag – increasingly a hashtag developed, tested, and focus-grouped inside the walls of a company. The Wall Street Journal revealed recently that the landscape is shifting when it comes to copyrighting hashtags. Not only is there a move by companies to protect their hashtagged IP, they are also being afforded protections by the authorities, too:

In an attempt to protect their intellectual property on social media sites and across the wider Internet, companies are increasingly filing trademark applications for hashtags related to their products and brands.

According to research by Thomson Reuters CompuMark, 1,398 applications to trademark specific hashtags were filed globally during 2015. That number has been growing consistently since 2010, when just 7 companies applied to trademark hashtags.

For companies, then, and especially those companies with the resources to trademark even the hashtags that their marketing team develops, the direction is clear. Hashtags, like all the other intellectual property that a company produces, is a distinct work product and worthy of legal protection.

Yet, while it is clear that courts are becoming more open to the idea of legal protections for hashtags, it is not yet clear whether this protection is in the same style as the protection of a logo or trading name.

But copyrighting a hashtag doesn’t necessarily mean controlling it. What’s more, it’s not something that the company behind the hashtag really wants to control.

And this creates a problem.

On the one hand companies are keen for users of social networks to repeat their hashtag and use it without any permission in an effort to bring positive coverage to a company, its products, or a company event. It’s the essence of going viral and that won’t happen if every user is forced to ask permission to use a hashtag from the owner of that hashtag.

Yet those hashtags can be just as easily hijacked by those who might wish the company harm. A small but organized coalition of like minded people can work together to see a hashtag campaign hijacked with disastrous social media shockwaves the result. Mashable gathered together eight examples of hijacked hashtags including:

What recourse does a company have when their hashtag is hijacked?

Even if the hashtag was protected it would do little to resurrect the companies (slightly) damaged reputation to pursue those who disparaged the brand using the copyright-protected hashtag in the courts. Even a single lawyer’s letter to a single user would result in an explosion of interest in the hashtag, an almost certain negative stream of press coverage, and an elevation of the dispute from private matter to public concern via the Striesand Effect – drawing attention to something embarrassing that few people would have noticed in the first place anyway has the effect of guaranteeing more attention than the original transgression ever had.

Consider an example: if McDonald’s was unhappy with a Twitter user reporting a negative experience at one of their restaurants using the #McDStories hashtag, suing that person in order to have the offensive tweet deleted will draw more attention to the tweet than if it was just left alone.

And that’s the rub for the companies protecting their hashtags legally. Sure, the case for protection under copyright and IP law is there and even obvious, but it’s unlikely that any company will want to be the first one to drag a social media user to court for using a hashtag in an unofficial manner.

The answer to the question as to whether you can own a hashtag is, yes, you can.

But this is also where the complexity emerges. Because even if governments and the courts are willing to offer copyright and IP protections to corporate hashtags, there seems to be little sign that, in practice, this will do anything to stop the use, hijacking, or anti-corporate strategy speech that social media encourages. Like any social space, the limits on acceptable and unacceptable discourse evolve with time and rarely, if ever, do corporate sponsored attempts at directing that discourse result in positive outcomes for the corporation pushing the change.