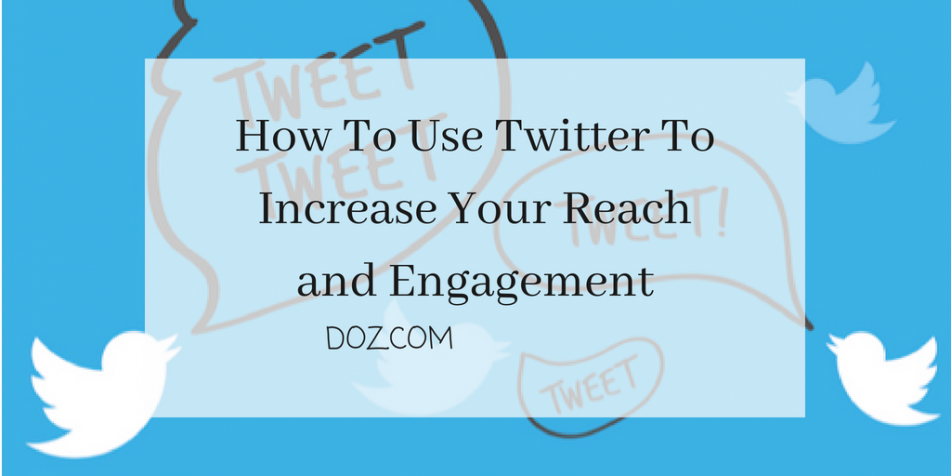 How To Use Twitter To Increase Your Reach and Engagement

For those of you who have been on Twitter should know how hard it is to get following and make impact on it. And Twitter being one of the major players on social media, you can’t miss out on the engagement on the platform with over 320 million active users. According to Statista, the amount of monthly active users as of the third quarter of 2017, the micro blogging service has increased to 330 million monthly active users.

Engagements on Twitter are basically defined by the total number of times users interactwith Tweets. To know that your Twitter account is properly engaged, you will be able to receive a couple of connections; people will mention you, favorite your tweet, and definitely follow you.

Twitter engagement is a crucial metric to evaluate for your business because you will have more chances to:

With Twitter analytics, you can see impression numbers — i.e., how many times your tweet showed up in people’s feeds. You can get even more detail with breakdowns of when and where each of these impressions happened. Same goes for click stats and engagement metrics (Likes, retweets, etc.). Twitter analytics tells you where on the tweet and where on the network that someone clicked or engaged with your tweet.

Engagement on Twitter can also help to foster a relationship between you and other industry peers and experts. If you share their content, they might repay you at some point by linking to you or even sharing some of yours. For more information about this, you can visit expert websites like SandCrestSEO or Unmetric.

Let us look at how you can use Twitter to increase your reach and engagements.

At the same time, weekends are not the time to take a break from Twitter. If you want engagement, schedule tweets for Saturday and Sunday. According to social media experts, engagement is 17% higher on the weekends than it is on weekdays.

In order to interact with your Twitter followers and to drive your tweets home with the right people, you have to target your audience. Here is how you can find your target audience:

Twitter is a great platform you can use to increase your engagements and grow your audience.

This is an article by Kenneth Kakande. Writing by day and reading by night, Kenneth is an enthusiastic freelance writer that auspiciously covers topics to do with Social Media, Digital Marketing, SEO, Web Hosting and Design among many others. His passion for technology inspires him to share knowledge with friends.