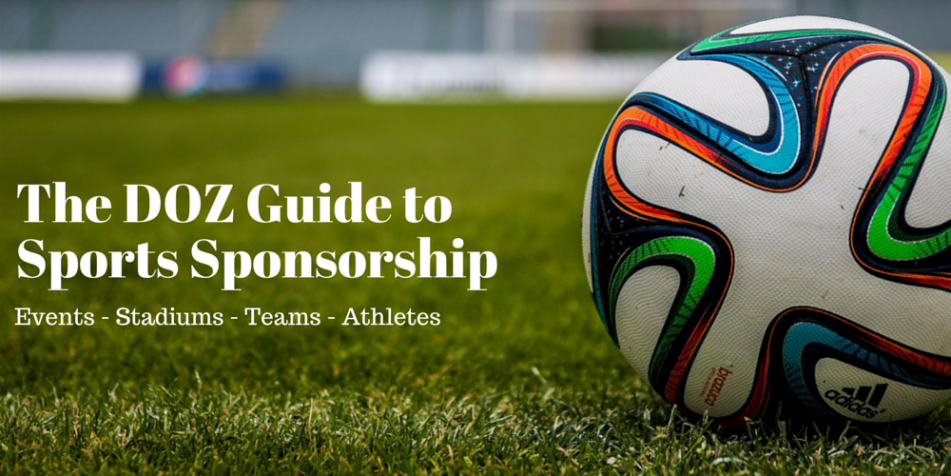 The DOZ Guide to Sports Sponsorship

In Antwerp in the year 1920 Belgian athlete Victor Boin took a deep breath and recited the first athlete’s oath at an Olympic Games. On behalf of the 2600 athletes from 29 nations Boin pledged “We will take part in the Olympic Games in a spirit of chivalry, for the honour of our country and for the glory of sport.”

While a version of this oath continues to be recited by an athlete during the Opening Ceremony of the Olympic Games to this day, the reality of elite sports means that competition is no longer just about a spirit of chivalry, national honor, or the glory of sport. Instead and increasingly, elite sport is a business and marketing that business is a multi-billion dollar pursuit all of its own.

In this post we will take a close look at some of the ways in which companies are advancing their marketing strategies through sports sponsorships, whether sprint events, teams, athletes, or the very stadiums in which the events take place.

One of the highest profile ways in which a business can take advantage of a major sporting event to market themselves and their products is by sponsoring the event itself. As an event sponsor the company would provide either financial support, in-kind products or services, or a combination of both. In exchange the sponsor is entitled to signage at the live event, exclusive access to event patrons, and the right to use the event name and logo in its own advertising.

Sponsoring an even is not small decision for a company and the investment is usually significant for naming rights sponsors. A single day of horse racing in the Australian Spring Racing Carnival can set a naming rights sponsor back some $3 million. However some events sponsors don’t even earn naming rights but are willing to spend enormously for the rights to associate themselves with the event nonetheless. The 2012 London Olympic Games, for example, saw companies like Coca Cola, GE, McDonald’s and Samsung spend some $100 million each to be a Worldwide Partner. Finally, some sports offer naming rights for parts of the event where the lower visibility can result in lower costs. Buying the sponsorship rights to the Tour de France’s Green Jersey, for example, will cost a business just $1.7 million and can be a far better deal than sponsoring on of the teams that compete in the race.

If a company wants to market itself to sports lovers without sponsoring a particular event there is the possibility of sponsoring the location where the event takes place. Stadiums and arenas offer sponsors the chance to reach sports fans as well as other users of the arena throughout the entire year, not just during a sports season. Stadiums might play host to rock concerts, motor sports, baseball, football, and even ice hockey. While all of these might bring their own sponsors to the arena – yes, even rock stars have sponsors these days – if the arena has a corporate brand it will be able to take advantage of some proximity marketing.

Reliant Energy bought the naming rights to the home stadium of the Houston Texans for $300 million in a 30-year deal. In a smaller market, bankers ANZ bought the naming rights to the former Olympic stadium in Sydney, Australia, for just $31 million in a 7 year deal. Naming rights for the O2 Arena in London cost the telecommunications provider $8 million per year but, in exchange, it is associated with every act and sporting event that contribute to the arena being the world’s busiest. Across London the Emirates Arena was named for Emirates Airline after that company signed a deal worth $150 million over 15 years.

Sometimes it makes more business sense to sponsor an individual team in a wider sports league than the league itself. The sponsor gains exposure via the teams exploits and – where the team is successful – the sponsor can revel in the reflected glory. If a sponsor is successful in placing their company logo on the jersey of the team then they will have the chance to have their logo in every newspaper story, sports photograph, and report about the team, too.

Sponsoring a team is a significant investment and comes with some significant risk, too. If the team performs well then the company will enjoy the benefits of that success. American carmaker Chevrolet saw great value in being associated with leading English football team Manchester United and agreed to a seven-year, $550 million deal to place its logo on the player’s jerseys. It’s slightly less expensive to enter into team sponsorship in F1 where deals start at $3.5 million, though top-end deals such as Marlboro’s Ferrari commitment of $100 million per year do exist. Yet if the team performs badly or, even worse, should the team be involved in some sort of scandal, the sponsor will forever be associated with such debacles. Consider Festina, a leading Swiss watch brand, that sponsored a professional cycling team for more than a decade. While the team was successful winning major races and even the World Championship, the brand will be forever remembered as the sponsor of the team removed from the 1998 Tour de France for doping.

Finally, if sponsoring a team, stadium, or an event is not in line with a company’s marketing strategy, an alternative marketing route can be the sponsorship of an individual athlete. Sponsorship of an athlete can again be either in terms of cash or in-kind contributions and, if an athlete is successful, can provide valuable for the firm. For sponsors looking to align themselves with a ‘local hero’ sponsorship of an individual can be very useful, and for firms seeking to reach an international audience a sportsperson can be the perfect, value-neutral ambassador.

Track star Usain Bolt – the world’s fastest man – is sponsored by sportswear brand Puma with invests some $9 million a year in the athlete. In exchange Bolt wears Puma branded clothing in competition and in training, and only ever runs in Puma shoes. Swiss tennis player Roger Federer has a similarly large deal from sports powerhouse Nike who pays him $10 million a year to wear their clothing and shoes. Even retired athletes can prove valuable for firms, with former boxer George Foreman signing a $137 million lifetime deal with Salton, Inc, who make the grills bearing his name.

Of course, should the fortunes of your chosen athlete change then brands might quickly want to distance themselves – and quickly. Sponsors like Nike and sunglass manufacturer Oakley cut ties with champion cyclist Lance Armstrong when his doping history was revealed. Though they saved the money that would have otherwise flowed to the disgraced sportsman, the damage to their brand was already done.