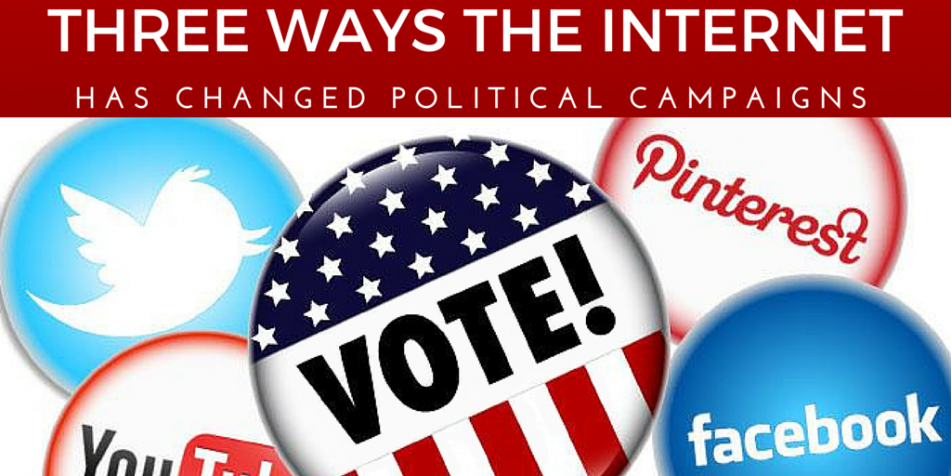 There was a time when the winning political campaign strategy was a combination of stirring speeches, kissing babies, and a winning smile. A skilled politician could have an audience laughing, crying, shouting support, and eating out of the palm of their hand, and hopefully translate all of that into votes come election day.

Such days are gone.

Today political campaigns are no longer about being able to shake every hand in the room but rather about reaching every single person who might wander into a polling place and mark a ballot. With seats at campaign events always limited and with the days and weeks of the average voter being busy enough without the addition of a rally every month, political campaigners have had to reach out to voters where they actually are.

And where are they? For many the answer is they are on their phones, on a social network, or just generally online.

It’s little surprise, then, that the modern political campaign is more and more committed to reaching voters via digital means. Whether advertising on search engines and social media, reaching out to email lists with millions of subscribers, analyzing data for trends and voting intentions, or asking – even begging – for political donations, the internet is often where modern political campaigning lives and dies.

Of course, the internet is not the first technology to play a game-changing role in political campaigns. The advent of the radio gave politicians a voice and the ability to broadcast in a way they had never had before. Television, too, presented candidates to the world a more than just a slogan or a speaker, but as a person, live and in living color (all, at least eventually in color).

The internet, though, is a different sort of technology altogether. Here are three reasons that the internet is changing political campaigs, political marketing, and political communication forever.

Political Campaigns are changing their…

The speed of political communication enabled by the internet is changing political campaigns in a way that previous technologies were unable to.

Both radio and television allow for the live transmission of a political message or political event but both of these technologies depend on the audience being present to receive this message. An event streamed via the internet is just as live as the radio or television broadcast that accompanies it, yet is also easily accessed immediately and in perpetuity following the event via any one of dozens of free video streaming services.

Radio and television broadcasters rely on journalists on the ground who vet stories, push them though an editorial process and, eventually, report live to camera or to tape. On the internet such gatekeeping does not exist. An individual can hear a comment, record it, upload it, and tweet it to thousands of people within seconds of it occurring. The speed and rawness of the comment, in this case, overwhelms any desire for placing the comment in a wider context.

Does this scare politicians? It can – but it is also a key factor in allowing a politicians message to be pushed out to a wide audience at a speed no other media can match, and sometimes this speed is what a campaign needs most of all.

Some technologies are more versatile than others.

A campaign spot on the radio requires a strong voice, an easily understood message, and perhaps the judicious use of sound effects.

A 30-second TV commercial on television allows a campaign to reach voters with visuals, sounds, and perhaps text on the screen, too.

A campaign flyer or direct mail letter can communicate a campaign message in text and might even add a few photos or graphics design elements to make it memorable.

Now consider the versatility of the internet and the options that it offers those seeking to communicate a political message to a pool of potential voters.

Want to reach a voter who wants every detail of every policy? Send them to your collection of PDFs.

The voter who wants information tailored for their personal political preferences need only click a couple of boxes on a list to ensure they get newsletters personalized in a way that direct mailers can only dream of.

The voter who liked the radio ad can be delivered a podcast, the voter who preferred to watch speeches can see them streamed live, and anyone who likes to watch campaign commercials – these people do exist, trust me! – can find them archived on video sharing sites, and sometimes only ever released there.

It’s not that the old ways of political communication were particularly difficult to use.

To understand a speech at a campaign rally one need only open eyes and ears to the message being amplified over a public address system. A newspaper or campaign flyer is enormously easy to use, and a radio is not so difficult to tune in. There’s nothing difficult about hitting a button on a TV remote control, either.

But none of these technologies come close in terms of ease of use to the internet.

For one thing, the internet is a technology that is incredibly mobile. A smartphone is internet enabled and can be carried in a pocket – try that with your big screen TV! While a newspaper is fairly portable, it is also out of date by the time it is printed, let alone by the time it is actually purchased by a potential voter.

A radio is easy to tune in but it is not easy – or usually possible – for one person to be listening to two stations at a single time. Online? It’s easy. A window for a streaming music site can be open while another window with the campaign website is open on the same screen.

Where a home might have one or two TVs it is likely that every voter in the home has their own smartphone, probably their own computer, and likely another internet enabled device (tablet, game console, and yes, even a TV), too. The internet is truly a technology that follows the user and is available on-demand, 24/7.

This week DOZ is exploring the nexus between marketing and politics, with a particular emphasis on political campaigns online. Click through everyday as we look at the way the internet has changed political campaigns, the key points that a politician needs to get straight with their campaign manager, the importance of social media to online campaigns, and five times that the internet played a big role in a political story.