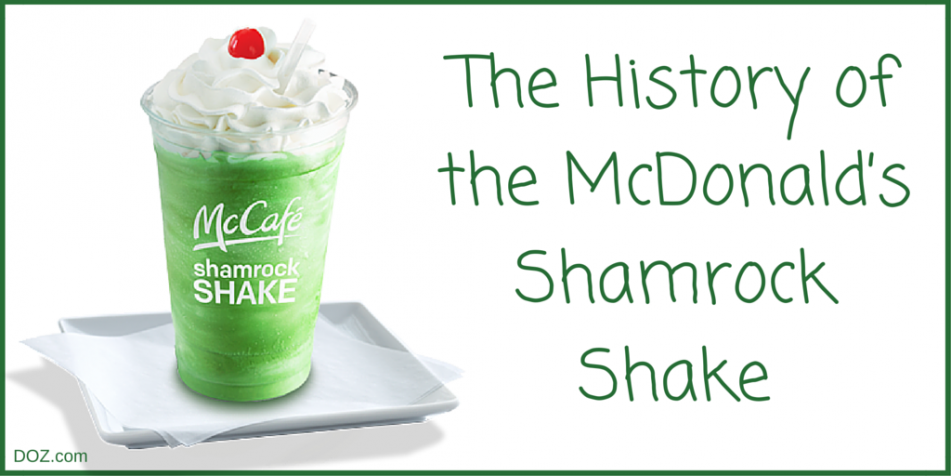 The History of the McDonald’s Shamrock Shake 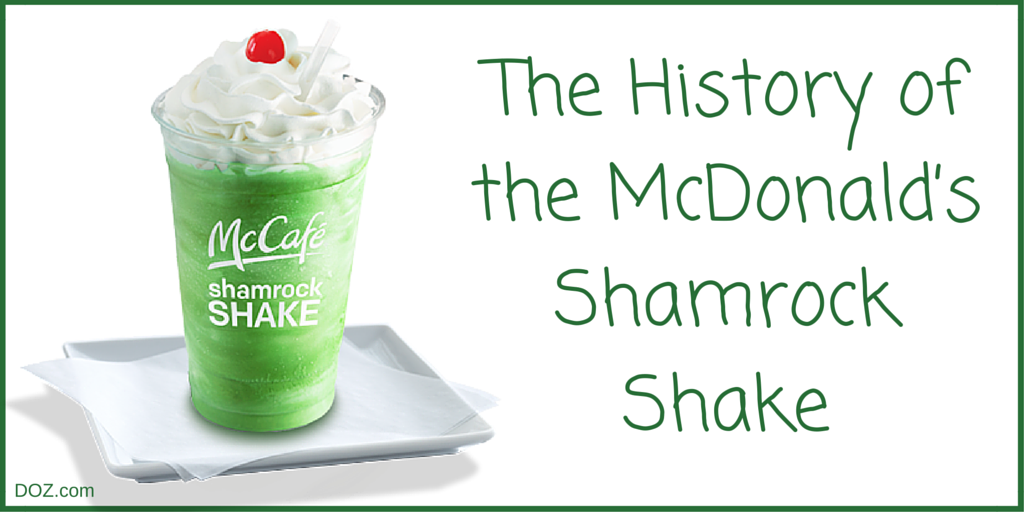 The McDonald’s Shamrock Shake, a seasonal treat fast approaching its fiftieth year of bringing a little green pleasure into the lives of millions. A March mainstay, the minty green shake is as familiar to American audiences as the Starbucks Pumpkin Spice Latte or the Outback Blooming Onion. Consumers look forward to enjoying a cold, Shamrock Shake in the lead up to St Patrick’s Day each year and now – in the age of Instagram, Facebook, and Snapchat – sharing that experience with the world.

But how did the most famous American burger restaurant find itself selling an Irish-themed milkshake? And how did it move from seasonal oddity to gastronomic event? And why are Shamrock Shakes still so popular after nearly half a century?

Here’s our look at the wonderful example of marketing that is the McDonald’s Shamrock Shake.

The Birth of the Shamrock Shake

While one of the defining features of a McDonald’s restaurant is the chance to taste the same burger made the same way almost anywhere in the world (with some notable regional differences, of course) its important to remember that new products are often the result of experiments in just a single store or city. It was out of single city, Chicago, that the Shamrock Shake emerged in 1970 as local franchisees sought a way to celebrate the city’s unofficial Irish holiday.

Chicago was already famous for dying the Chicago River a bright emerald green, a tradition that began back in 1961. The idea of dying a McDonald’s vanilla shake green came along just a couple of years later and it was Rogers Merchandising that got the shake into local stores. Rogers was already a well known name in the fast-food sector being involved in selecting toys and marketing materials for McDonald’s Happy Meals as well as competitors like Burger King and Wendy’s, too. The Shamrock Shake, though, was something new for the company as it was not a physical addition to an existing meal but a new drink altogether.

Rogers Merchandising’s James Byrne was inspired by a family milkshake recipe and adapted it to the McDonald’s chain. In the beginning the Shamrock Shake was an impressive combination of lemon, lime, vanilla ice cream, vanilla syrup, and lemon-lime sherbet, too. Within a couple of years, though, the complexity of the recipe was reduced somewhat and the Shamrock Shake devolved to being simply a vanilla shake with some green coloring. It 1983 the recipe changed again, and the mint flavor that continues to define the product today was introduced for the first time. No longer a vanilla ice cream base, the modern Shamrock Shake is based on mint ice cream with the addition of just milk and vanilla syrup. This recipe has remained largely unchanged for more than 30 years.

Just as the recipe has changed over the years, McDonald’s has also experimented with different marketing approaches to sell its seasonal treat.

Among the most recognizable characters in all of advertising, Ronald McDonald is the face of the McDonald’s brand. The red, yellow and white clown is a friend to children, a smiling face in advertising, and one of the key players in McDonaldland, the fictional world where McDonald’s characters live.

Some of the characters in McDonaldland are familiar to generations of McDonald’s customers. There’s Ronald McDonald, of course, Grimace, Hamburglar, Mayor McCheese and Birdie, all of whom were used to promote certain products, services, or the McDonald’s brand generally. While today only Ronald McDonald remains as a character in use by the company to promote its restaurants (and even then sparingly) the characters were once key to promoting permanent and seasonal offers at McDonald’s restaurants.

…a green grimace. He wears a green cob hat, a vest with shamrocks on it, carries a wooden cane and appears furrier than his nephew Grimace. Every March, around St. Patrick’s Day, he delivers Shamrock Shakes in McDonaldland. Uncle O’Grimacey is just one of many grimaces in Grimace’s extended family.

It’s fair to say that a stereotypical character like Uncle O’Grimacey wouldn’t pass muster in the politically correct advertising industry of 2016, but his appearances in McDonald’s advertisements during the 1980s helped cement the Shamrock Shake in the minds of the customers.

Other advertisements highlighted the product by focusing more on the product than the McDonaldland character that delivered it. In this advertisement there are multiple shots of the Shamrock Shake as well as the short-lived Shamrock Sundae.

If the advertising looks dated, well, it is fair to say that it is. This effort from 1983, for example, uses choral backing vocals over a traditional Irish jig and magic green hats to sell the Shamrock Shake.

Other advertising from the same era focused primarily on children, though the product remained a central feature of the pitch:

In more recent years the advertising has taken the focus off the McDonaldland characters and even children altogether, with this effort from 2012 more in line with the broader McDonald’s branding strategy:

This St Patrick’s Day McDonald’s is promoting the Shamrock Shake underneath its McCafe brand umbrella. No longer the plain greens shake of the 1980s and 1990s, the McCafe Shamrock Shake is a chic, light green cream-topped delight served with a cherry on top. 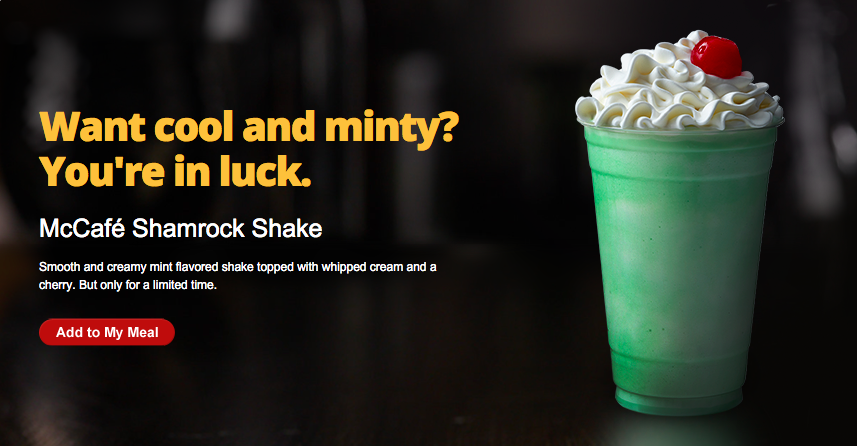 The focus here is less on the Irish factor and more on taste: cool, minty and a limited time offer. There’s no Uncle O’Grimacey, there’s no Irish dancing or disturbing ‘Kiss me I’m Irish’ situations, just a fresh, cool and green shake served in a café style clear plastic cup. It’s cleaner, it’s modern, and it’s just as appetizing as ever.

While the marketing may have evolved, the product remains the same and the appeal of the early-Spring milkshake is just as strong as ever. McDonald’s has proven that a strong product combined with savvy advertising and a limited-time-offer makes for an almost irresistible package and is a big part of the reason why the Shamrock Shake continues to delight nearly fifty years after it was first imagined in Chicago.