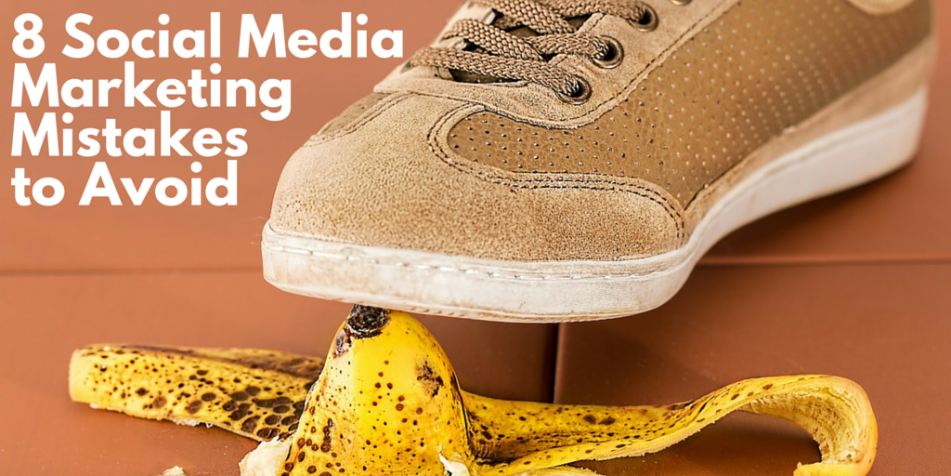 These days it is less an option and more a must to include social media in your online marketing strategy. Neglecting what is one of the most active and most engaged slices of the internet is a problem for almost every business, whether B2C or B2B, and much has been written about how to engage customers on social media effectively.

What we haven’t often done, though, is explained the sorts of social media marketing mistakes that you need to avoid in building your strategy, and executing it on the various social media channels your company has embraced. In other words, we’ve given you the ‘how to’ guide but never the ‘how not to’ guide.

In this post, instead of telling you what to do we’ll explain what to avoid. In particular we’ll focus on 8 social media marketing mistakes identified by Digital Marketing Philippines in their incredible infographic (see below), explain them clearly, then explain how you can avoid them. Coupled with our advice on what to do, this advice on what not to do should help you lift your social media marketing game, and grow your business in the process.

The first rule of social media marketing is you need to have a social media marketing strategy. This is not a domain where you can fling things at the wall and see what sticks. Instead, social media marketing should be treated like any other marketing channel, and this means setting goals, working on analytics, knowing where you are strong and weak, and how you can use the former to overcome the shortfall in the latter. While you might be lucky and have a tweet or post hit the big time, without a strategy to support your social game you’re flying blind. Instead of building a reputation as consistently engaging, you’ll be earning a reputation as a one-hit-wonder on Facebook and Twitter, and that will do nothing for sales.

Want to avoid this first of the social media marketing mistakes? Check out what we’ve had to say in the past about building your social media strategy and making it work for your business.

Mistake 2: Creating Accounts on Too Many Platforms Too Soon

The world of social media is huge, and the number of major channels you can engage on are numbered in the dozens. You’ve heard of the major networks – Facebook, Google+, Twitter, Instagram, Pinterest, LinkedIn, Tumblr, Reddit, and more – and you’re ready to get started on them all. And that’s your error. All of these channels need the attention of your social media team, and adding an account to one only to have it sit almost dormant is a bad idea. Any customer who encounters your empty Google+ page, or finds only a handful of posts from a month ago on your Tumblr site is going to assume the worst: you’re not in business or, if you are, you aren’t really interested in the channels that they are interested in.

Want to avoid being overstretched? TechNCom offers advice on how to choose the best channels for your business.

There are two ways you can grow your social media reach. The first is by providing useful, attractive, and shareable content regularly, engaging with your followers, and building a brand over time on your chosen social media channel. The other is to buy 5,000 followers and bump up your numbers overnight. Which is better? The first, obviously, and the reasons why should be just as obvious. Fake followers are never going to be customers, they won’t share your content, they won’t engage with you on social media – indeed, all they do is make the number on your user page look bigger than it should. It might be easy and it sure is cheap – as little as $5 will see you earn thousands of new followers – but the downside is they’ll all be fake profiles, they won’t improve your reach, and you’ll likely have most of them stripped by Twitter as it proceeds with one of its regular spam account cleanups.

Want to avoid having to pay for fake followers? Here are some ideas for social media marketing that will help you win real followers online.

Mistake 4: Talking Too Much About the Brand and the Brand Alone

Want to avoid spending all your time talking about…well…you? Read about how to craft a more effective online presence to break through the rest of the ‘me-me-me’ chatter.

It’s surprisingly easy to get sucked into using – and then overusing – hashtags on social media. Whether its Facebook, Twitter or(the worst offender) Instagram, hashtags have become ubiquitous and barely a post is made without a hashtag to link it back to a certain event, conversation, or theme. But knowing when to say no to hashtags is important. Including one or two is usually sufficient, but more than that can see your content plunge in attraction to your readers. We’ve previously explained, for example, that adding a third hashtag to a Facebook post results in a 20% drop in engagement, and that a third hashtag in a Twitter post results in a 17% decrease in engagement. Of course, it is always channel specific – Instagram users find their engagement rates rise with the addition of hashtags, and that 11 hashtags do better than 5, 2 or 1 hashtag on that platform.

Want to get your head around hashtags? Check out our post and infographic on getting a handle on hashtags.

Mistake 6: Sharing Too Much in a Short Period of Time

Return to the cocktail party analogy for a moment. You’ve come prepared and you have a handful of great stories to tell that you are sure that everyone there will appreciate. Do you tell all of the stories in the first five minutes you’re there, or do you space them out over time? Which of these would your fellow party goers appreciate more? Of course, it is the latter – and the same works for social media. You should post your content across the day and the week. Spacing it out over time means there is more chance you’ll hit your target audience, and for followers who check your feeds multiple times a day, there’ll always be something new. Again, social media is social, so don’t treat it like a dumping ground, and instead let the conversation flow.

When you have a great idea you want to get it out on social media, and fast. But sometimes you get it out a little too fast and it includes an error. Or two. You spelt a hashtag incorrectly and so your contribution to a wider conversation won’t be found. Or you misspelled your heading and thus gave people no reason to click on what appears to be a low quality link. It really doesn’t make long to proofread a tweet or a post – we are talking 140 characters here, right? – so there’s no excuse not to get it right first time, every time. Don’t let your online brand be affected by poor grammar and spelling, or allow your great joke to nosedive because you spelt a word wrong. It’s one of the most common social media marketing mistakes, but also one of the easiest to address.

We’ve already mentioned this a couple of times but it bears repeating: social media is as much about being social as it is about sharing content and media with others. Being social means responding to people when they tweet at your company account, it means following and possibly even contributing to the discussions you spark on Facebook and Instagram, and it means highlighting the good work that your followers have done on Pinterest. Your goal is to build and maintain a community of people excited about your brand, your products, and interacting with you, and this means communicating regularly, consistently, and with a positive attitude. Maintaining a consistent tone is important, too, and whether this means having one person take control of your social media marketing management, or training your team to speak with a consistent voice, you’ll need to make sure you’re ready for the conversations to come.

Want to avoid being a wallflower and manage your social conversations more effectively? See how to speak with one voice in your online marketing.

Digital Marketing Philippines produced the wonderful infographic about social media marketing mistakes on which this post is based – see it below and bookmark it for when you’re building and implementing your strategy.